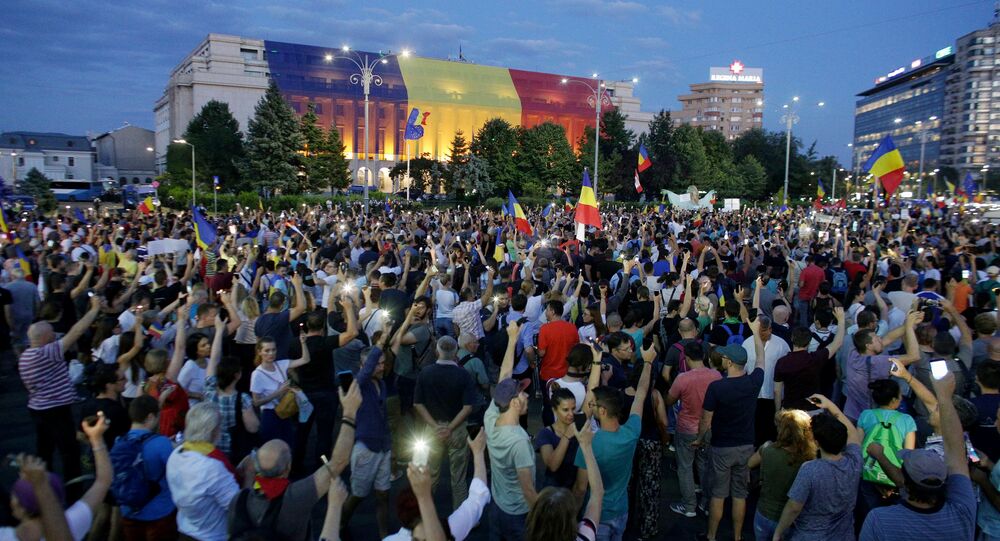 Over 10,000 People Gather at Anti-Government Rally in Romania - Reports

CHISINAU (Sputnik) – Over 10,000 people on Sunday are taking part in a yet another anti-government protest in the centre of the Romanian capital, local media reported.

According to the Agerpres news agency, the protesters gathered at the Victory square in Bucharest carrying the national flags of Romania, the United States, NATO, the United Kingdom and Canada as they call for closer ties with the West.

© REUTERS / Octav Ganea
Romanian President Calls for Investigation of Police Actions During Protests
Sunday’s rally is going relatively peaceful, compared to the mass protest on Friday, which was marred by outbreaks of violence as the police widely used water cannons and sprayed tear gas into the crowd. Over 400 people were injured in the protest and 70 were hospitalized, including 11 police officers.

Nationwide protests in Romania were sparked by unpopular tax, pension and social security reforms, as well as accusations of corruption against the ruling Social Democrats (PSD). Romania, a member of the European Union, has long been suffering from low level of income among population and underdevelopment in comparison with most countries in the bloc.