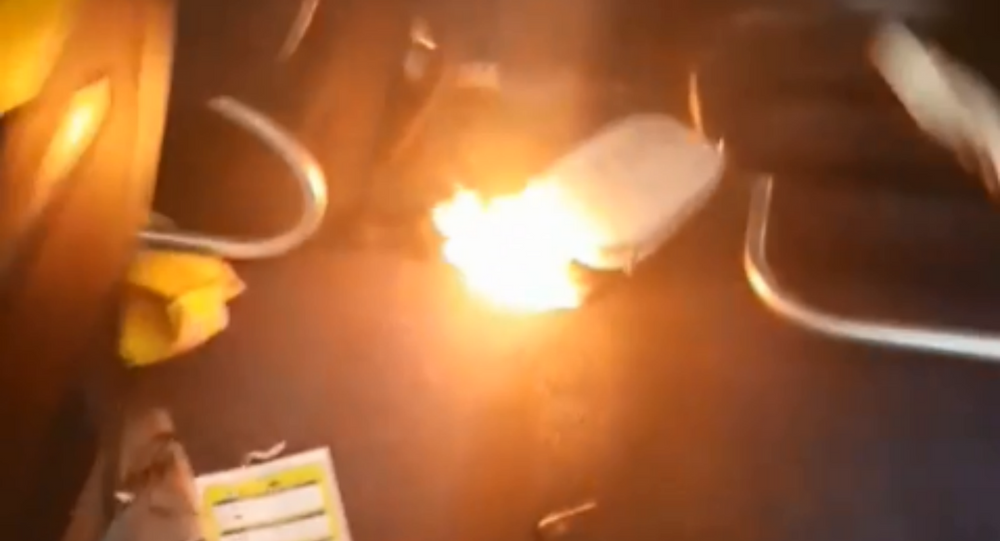 Ryanair passengers had a rude awakening on Tuesday when they were suddenly forced off their Ibiza-bound flight after a traveler's portable phone charger burst into flames before takeoff.

The incident took place at roughly 5:30 p.m. local time at Barcelona's El Prat Airport, just minutes before the Boeing 737 was due to depart for the party island. Footage of the growing flames was uploaded to Instagram on Wednesday by passenger Anthony Carrio.

The video begins at the point when passengers are already frantically heading toward the emergency exits.

looks like it harfer to get to ibiza then we thought ive never seen so many people so scared in there life! portable charger blew up in the same row as I was sitting everyone tries to run and all I do was put it out with water 😂 luckily it was just before taking off come on people how can no one else think of doing that fire across the whole plane width of the plane emergency exits are pre fun when there's not a real emergency #ryanair #fire #emergency #panic #geteveryoneout #bombscare To use this video in a commercial player or in broadcasts, please email licensing@storyful.com

​Carrio stated in his post that he'd extinguished the fire by simply dumping some water on it. "I've never seen so many people so scared in [their] life!" he wrote. "Portable charger blew up in the same row as I was sitting, everyone tries to run and all I do was put it out with water."

Additional footage from the scene shows passengers falling over each other as they slide down the plane's emergency chute. Although no medical attention was required due to the actual fire, some passengers did suffer slight burns from the chute.

​According to The Sun, the ignited device belonged to a passenger from New Zealand.

In a statement released Tuesday, Ryanair indicated that the plane was immediately evacuated once flight staff were alerted to the incident, and the passengers were then relocated to the airport terminal.

Per Ryanair protocols, passengers are allowed to carry two spare lithium ion batteries in their carry-on luggage, but they must be "individually protected" to avoid any short circuits, the Independent reported.

​Images taken once emergency officials responded to the scene show both the mobile phone and charger melted down and charred. Local media reports also indicate that the seat of the phone's owner showed had burns.

This incident comes a few weeks after another Ryanair flight was forced to make an emergency landing after dozens of passengers experienced bleeding from their ears. According to earlier reports, the injuries were caused after the cabin lost air pressure.

Ryanair Says Jobs at Risk Amid Plan to Slash 1/5 of Fleet Over Strikes, Downturn