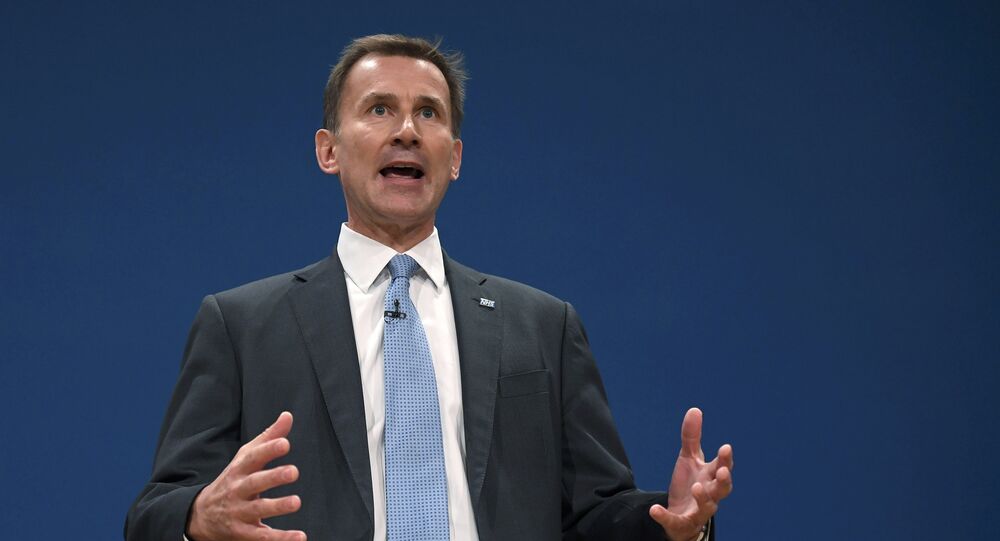 The UK foreign minister expressed Britain’s interest in securing a trade deal with Beijing during a visit to the East Asian economic superpower, as Brexit talks continue to yield little progress.

UK Foreign Minister Jeremy Hunt said he discussed the possibility of a bilateral free trade arrangement between Britain and China on Monday, The Independent reported.

At a joint press conference, Minister Hunt said he had “frank and open” talks with his Chinese counterpart, not only about a free trade agreement, but also more sensitive matters, such as alleged human rights abuses in Hong Kong.

© AFP 2021 / NICOLAS ASFOURI
'Millions of Jobs Will Be Lost': WTO Chief Warns US-China Trade War 'Worst-Case Scenario for the Global Economy'
He also highlighted the contrasting economic policies of the two states but said Britain thinks the continued growth of China’s economy “can and must be a positive force in the world.”

Responding to the Britain’s concerns about China’s conduct regarding human rights, Chinese Foreign Minister Wang Yi later said, “We do not welcome nor do we accept other countries to interfere in Chinese domestic affairs,” insisting the UK had no right to raise the issue with it.

Hunt was recently appointed foreign secretary after Boris Johnson resigned from his cabinet post over disagreements with UK Prime Minister Theresa May’s Brexit strategy and post-Brexit vision for the UK, and this was his first major overseas visit.

Despite some campaigners and politicians calling for a second referendum to be held, Britain is still set to officially withdraw from the EU in some eight months, and with several key details yet to be agreed, the prospect of a no-deal Brexit is looking increasing high.

© REUTERS / Francois Lenoir
Irish Gov't Dismisses PM May’s Threat, Claims UK Can't Afford Hard Brexit
Given the size of the Chinese market and its importance for the UK – in terms of both imports and exports – it’s unsurprising Britain is trying to hammer out a favorable trade deal with Beijing, especially as the possibility of a hard Brexit looms large.

Such a Brexit would see EU common tariffs coming into effect against the UK, hurting the price competitiveness of British exports in the union while also resulting in price inflation and potentially damaging existing supply chains to the UK.

Breaking Up is Hard to Do: Over 300,000 Britons Demand 2nd Brexit Referendum