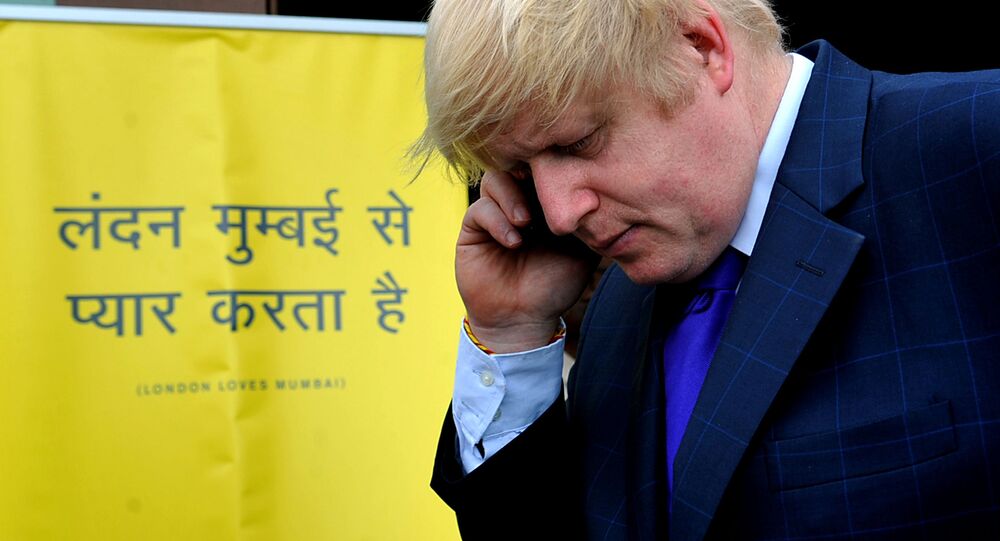 Ex-Trump adviser Steve Bannon had earlier advised Boris Johnson, who resigned as the UK's foreign secretary earlier this month over disagreements with Theresa May on Brexit policy, to challenge the prime minister for her seat.

"I'm sure they weren't discussing the cricket scores," the source said, admitting that he wasn't certain what exactly the two men talked about.

© REUTERS / Henry Nicholls
Brexit: UK Gov’t is ‘Negotiating With Itself, Not the European Union’ – Prof
A former member of the UK government told the outlet that Johnson and Bannon's communications went back a long way and that the officials were known to have exchanged text messages while Bannon was still working at the White House. They are not believed to have met face to face during Bannon's London visit.

Johnson, who had remained relatively low-key following his resignation, renewed his attacks on May's Brexit plans on Thursday, calling them unworkable and urging fellow Conservative Party lawmakers to "chuck Chequers," referring to the government white paper on Brexit agreed at the prime minister's country house.

"It is vassalage, satrapy, colony status for the UK. For the first time in a thousand years our laws will be made overseas, enforced by a foreign court," Johnson wrote in an op-ed for The Spectator magazine.

Johnson resigned from his post on July 9 over his disagreement with Theresa May's Brexit approach, which he said would leave the country too closely dependent on the European Union after London leaves the bloc. Brexit Secretary David Davis also resigned.

© REUTERS / Aaron P. Bernstein
German Politicians Vow to Fight Bannon's 'Frontal Attack on EU'
Bannon, who served as a senior Trump campaign chief executive during the 2016 presidential race, went on to serve as White House chief strategist after Trump stepped into office. The former co-founder of Breitbart News resigned in August 2017. Recently, he announced plans to move to Brussels for a short period to unite right populist parties ahead of next year's elections to the European Parliament.

During his London trip, Bannon offered praise for Johnson and defended Tommy Robinson, a right-wing UK activist jailed for breaching the peace outside a UK courthouse in May for reporting on the trial of a child molestation case involving Muslim immigrants.