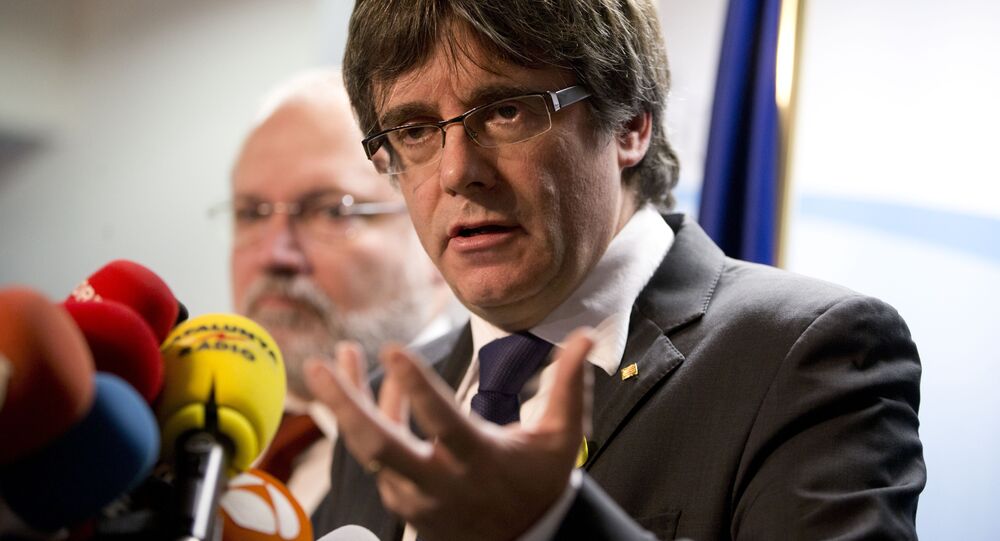 BERLIN (Sputnik) - Former Catalan leader Carles Puigdemont said on Wednesday that reports on Russia's alleged involvement in Catalonia's pro-independence movement are lies that can not be justified.

"There is a series of fake news about [ties between pro-independence movement and Russia]," Puigdemont said, adding that there is "not a single proof which would substantiate [such claims]."

According to Puigdemont, the information on alleged Russia's backing was disseminated by Internet bots.

Speaking before reporters in Berlin, the former Catalan leader also expressed his intention to depart from Germany for Belgium, where he plans to go ahead with his political campaign for Catalonia's independence, in the near future.

"This week, I will return to Belgium where I was before leaving for Germany. I am going to continue my political activities in Belgium, as our main [Catalan] representative offices are located there," Puigdemont noted.

Puigdemont's announcement that speculations about Russia's involvement in Catalonia's pro-independent movement are "fake news" comes as a response to reports of several Spanish media published prior to the Catalan independence referendum in October suggesting that "Russian hackers" allegedly backed the separatists. In particular, El Pais said in September that Russian cyberagents reportedly helped to operate referendum-related websites which had been blocked by Madrid.

Puigdemont fled to Belgium in October to avoid rebellion charges after last year's Catalan independence referendum. In March, Puigdemont was traveling back to Belgium from Finland by car but was arrested in Germany after he crossed its Danish border.

On July 20, a German court ruled to stop the process of extraditing Puigdemont, since the Spanish Supreme Court withdrew the European and international arrest warrants against the politician and five other fugitive Catalan political activists who remain abroad. Madrid's move came after the German court decided that Puigdemont could only be extradited over charges of misuse of public funds, rather than his initial rebellion charge.

In the meantime, Spain’s national arrest warrants against the regional politicians remain in force, meaning that they will be arrested once they return to Spain.