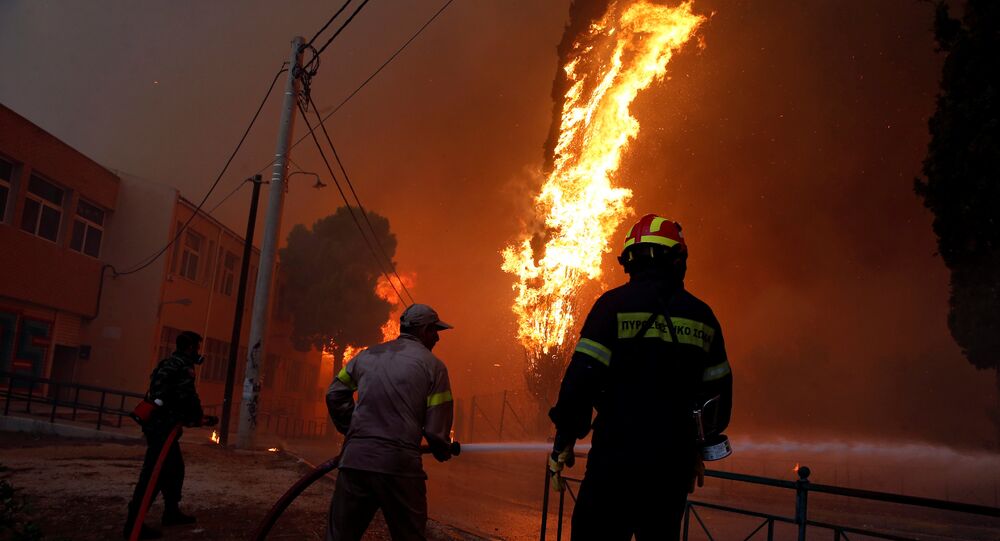 The number of deaths resulting from wildfires in Greece has increased to a total of 79, local media reported on Wednesday, citing firefighters. The president of the Voluntary Fire Brigade Association, Makis Ciugris, spoke to Sputnik in an interview about the rescue operation and the horrid scene on the ground.

In order to help extinguish the fires, as well as to aid in the search and rescue operations held in Greece, a number of voluntary firefighters have signed up. These volunteer firefighters were in the area of Mathi yesterday, during the disaster, and today, when they took part in search operations.

"I've been in the fire brigade for 19 years but I've never seen anything like this before," the president of the Voluntary Fire Brigade Association, Makis Tsiugris, told Sputnik in an interview.

© AP Photo / Ioanna Spanou
WATCH Horrific Fire Rage Out of Control in Greece Forcing People to Flee
The firefighter went on to say that most of the houses had been destroyed, hundreds of cars had blocked the streets and that it was extremely difficult for people to escape and therefore they were panicking.

Tsiugris was also involved in checking burnt houses for any survivors and saw the bodies of people who were trapped and tragically killed. He emphasized that although the fire had disappeared, the search would continue.

"The search continues, because there are people who are still missing. We still have a lot of work,” he said.

The firefighter went on to say that he also took part in yesterday's fight against raging fires. "The situation was tragic. The terrain looked like it was bombed,” he said, emphasizing that the rescuers did everything that was humanly possible.

"The fire spread very quickly as there was a strong wind, and the fire was very intense. It spread to the area which was rich in pines and scattered to the houses in that area," Tsiugris said.

Describing the situation on the ground he said that everyone was trying to evacuate in cars, there was confusion and that's why there were so many victims.

“Someone was trying to get into the car, someone on the contrary tried to get out, people collided, prevented each other from passing, and all this contributed to the hostile situation of panic. It was the panic that contributed to the tragic results that we are seeing,” the firefighter said.

Asked whether it was worth trying to reach the beach in such a horrid situation, the firefighter said that the residents of Mati had no other choice because the whole region was burning.

"Unfortunately, the fire had reached the beach; many people may have fainted from the thick smoke. Some were throwing themselves into the sea in order to escape. This was an extreme case, I had never seen such a thing in my life,” Tsiugris said.

Vast wildfires in the Greek capital region of Attica broke out on Monday. The calamity was caused by 40 degree Celsius (104 degree Fahrenheit) heat and strong winds, which prevented emergency services from extinguishing the fire.

Greek government spokesman Dimitris Tzanakopoulos said that Athens would set up a package of relief measures worth 20 million euros (over $23 million), which would be provided through tax exemptions and loan repayments for those who were affected by the natural disaster, according to the Kathimerini newspaper.