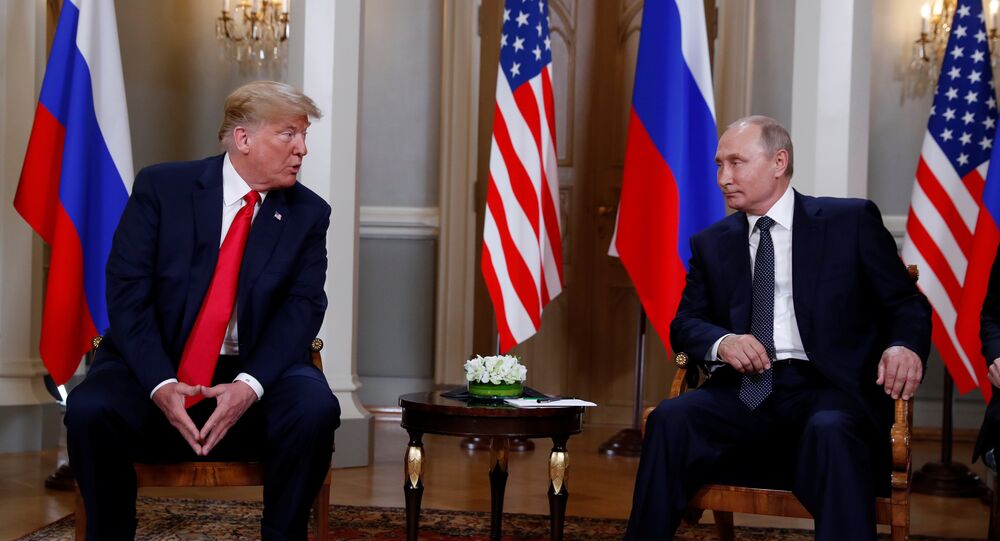 On July 19, the Bloomberg news agency reported, citing two people who were in attendance at a closed-door speech of Putin, that the leader, during his recent meeting with Trump in Helsinki, said he had proposed holding a referendum in eastern Ukraine under the auspices of international organizations so that local residents could determine the status of the breakaway territories themselves.

"This proposal was discussed, however no reaction has followed yet," Ushakov told Izvestia newspaper in an interview published on Wednesday.

© AFP 2021 / Ludovic Marin
Russian FM, Chief of General Staff Discuss Syria, Ukraine Conflicts with Macron
On July 20, Russian Ambassador to the United States Anatoly Antonov said that specific proposals on settling the conflict in eastern Ukraine were made at the Helsinki summit.

Ushakov added that Russian Foreign Minister Sergey Lavrov and US State Secretary Mike Pompeo within the framework of the Helsinki summit discussed the issue of Russian diplomatic property in the United States.

"As far as I know, when Minister Lavrov negotiated with Pompeo, they raised this issue," Ushakov added.

© AP Photo / Pablo Martinez Monsivais
Republican Lawmakers Call on White House to Disclose Helsinki Summit Mysteries
The conflict in Donbass started in 2014, when Ukrainian authorities launched a military operation against the self-proclaimed Donetsk and Lugansk people's republics that refused to recognize the new government in Kiev, which came to power after what they considered to be a coup. In February 2015, the warring parties signed the Minsk peace accords to end the hostilities in the region. Despite this, the situation has remained tense, with both parties accusing each other of ceasefire violations.
...
Reddit
Google+
Blogger
Pinterest
StumbleUpon
Telegram
WhatsApp
150