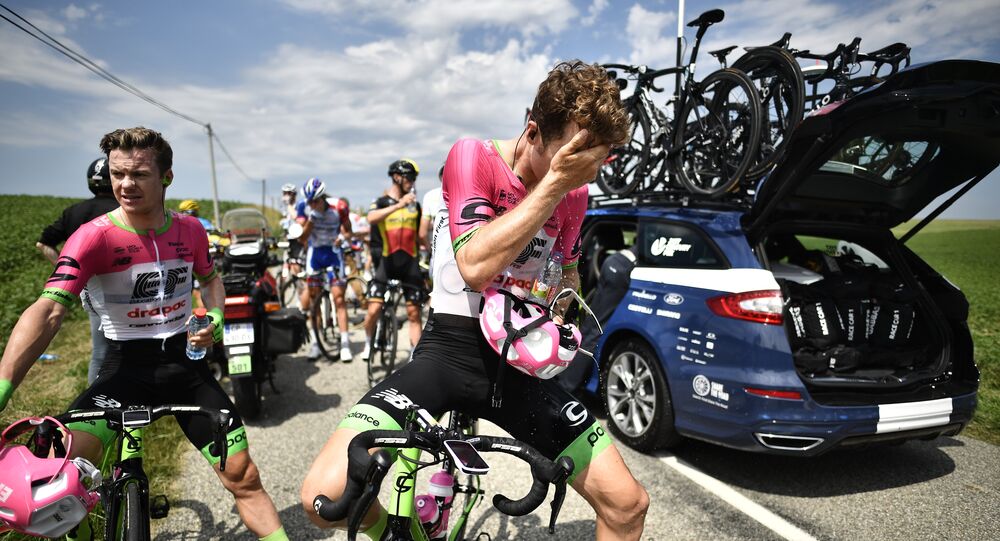 Tour de France peloton's stage 16 was interrupted by farmers' protests against a cut in state aid, according to a radio station, run by the organizers of the cycling race.

French media reports have suggested that some riders might have been attacked with pepper spray, with a number of participants washing out their eyes, while others are returning to their team cars for medical treatment.

Race stopped @letour after protesting farmers attempt to block the road. Police appear to have used pepper spray…..which blew back into the peloton…….genius.
Medical staff are washing out riders eyes.#TDF2018 pic.twitter.com/j6smiBWima

When farmer protests go too far: French farmers block Tour de France route and pepper spray believed to be from Police blows into rider's eyes. This isn't how you get the message across #TourdeFrance pic.twitter.com/cg1YB6RV2l

According to The Guardian's live updates, ITV 4's commentary team had revealed that it was a French policeman who had accidentally used the pepper spray in an attempt to stop a protester, trying to throw hay-bales on to the road along the route from Carcassonne to Bagneres-de-Luchon. Farmers are reportedly protesting against a cut in state aid.

Holy crap. The tour de France is now basically stopped after some people sprayed pepper spray or so and pushed hay rolls on the street?!? #TDF2018 pic.twitter.com/m1r4cb62u9

Watching the Tour de France. French police have just inadvertently tear-gassed the entire field, bringing it to a halt. Other than that, all going very smoothly…

The race has since resumed, according to the radio station, run by Tour's organizers.