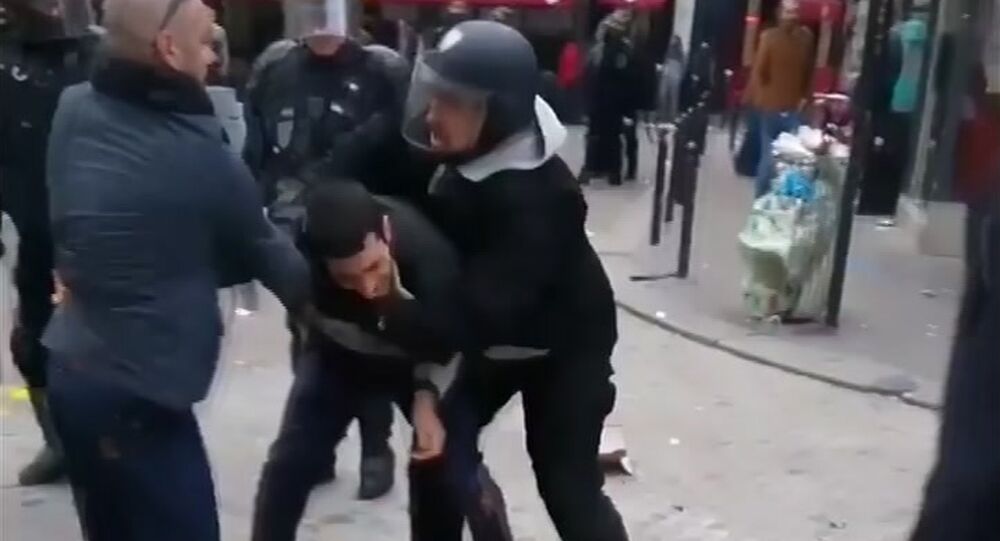 The French government is facing mounting criticism amid a scandal involving President Emmanuel Macron’s top security aide who was filmed beating a protester on May Day.

Interior Minister Gerard Collomb will be questioned by lawmakers on Monday following reports that incriminating videos of Macron’s security aide Alexandre Benalla had been illegally handed to him by three police officers in a bid to clear the aide's name, The Local wrote.

In the first video, shot on a smartphone, Benalla, wearing a riot police helmet and police tags while off duty, is manhandling and striking a young man during May 1 scuffles.

© Sputnik
300 Protesters Clash With Police in France Amid Anti-Capitalist Rallies (PHOTOS)
In a second video, published by Le Monde late Thursday, Benalla is seen violently wrestling a young woman to the ground.

The three police officers were taken into custody suspected of providing the surveillance footage to Benalla.

They were accused of "misappropriation of images from a video surveillance system," as well as a "violation of professional secrets," the prosecutor's office said.

Alexandre Benalla had initially been suspended for 15 days and allowed to return to work, but the French president’s office said on Friday that it had decided to begin dismissal procedures.

President Macron has so far remained silent on the topic.

This is the first time that Emmanuel Macron has been faced with a scandal since he took office in May 2017, promising an exemplary presidency breaking with the scandal-tainted past of France’s political elite, France 24 wrote.