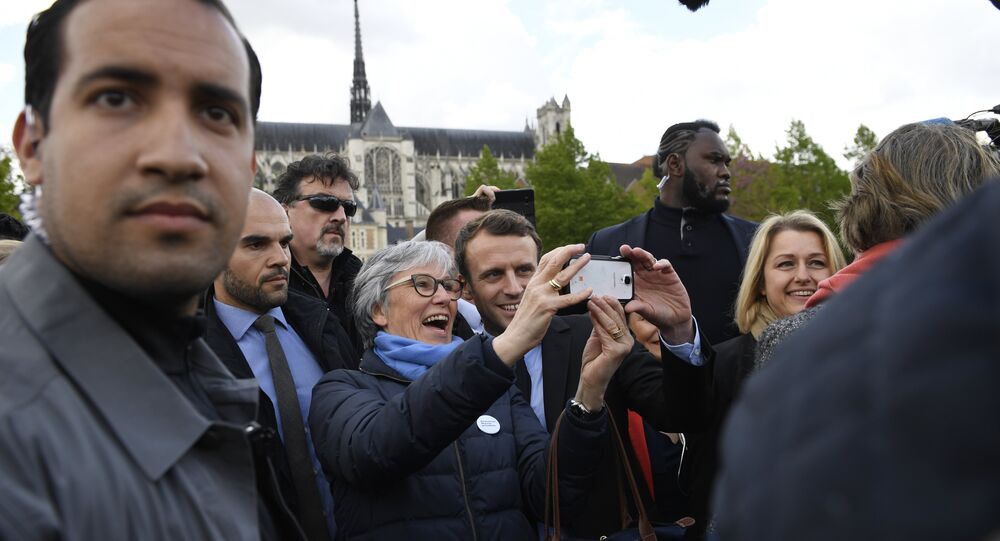 A French presidential security aide was detained after the media found footage of him wearing riot police gear and stamping on a protester. But the officer's case isn't the first instance of violent behavior by President Macron's security personnel and his entourage in general. Sputnik looks back at others.

On Wednesday, Le Monde published a shocking video showing senior presidential security officer Alexander Benalla running around assaulting protestors and tackling a young man and punching him repeatedly before fleeing during this year's May Day demonstrations in Paris. The video, and President Emmanuel Macron's attempts to protect Benalla from disciplinary measures, prompted intense criticism in the media and among opposition politicians. Prosecutors detained Benalla on Friday, and he now risks charges of battery, misappropriation of the authority of state power, and the illegal use of police symbols. Elysee Palace has announced his dismissal.

The Benalla case is the second scandal to hit the presidential security team in less than two months. On June 6, French social media reported that Makao, a giant of a man who served as Macron's bodyguard during the presidential campaign, was caught on a scandalous Snapchat video playing video games with Jawad Bendaoud, a convicted criminal and landlord who harbored Daesh* (ISIS) terrorists who staged the brutal November 2015 Paris gun and bomb attacks that left 137 people dead.

CheckNews, an online fact-checking platform created by French media outlet Liberation, confirmed the video's veracity and subsequently caused a flurry of criticism on social media, with users shocked to see a member of the president's entourage playing video games with a man accused of harboring the criminals who committed the deadliest terror attack in French history. Elysee Palace refrained from commenting on the scandal.

The president's security personnel aren't the only ones getting into hot water for violent or inept behavior since he stepped into office last May. Last August, French media reported on a violent incident involving M'Jid El Guerrab, a lawmaker from Macron's La Republique En Marche! Party. The incident saw El Guerrab get into a fight with Socialist Party activist Boris Faure. El Guerrab beat Faure so hard with a motorcycle helmet that the activist had to be hospitalized in intensive care. El Guarrab claimed that he acted in self-defense, but was charged with "violent acts involving the use of weapons," and ultimately forced to withdraw from the ruling party and become an independent MP. He received no criminal punishment for the attack.

The El Guarrab incident was a follow-up to a case of alleged violence involving Laetitia Avia, an up-and-coming La Republique En Marche! lawmaker and Macron ally who got into trouble over a fight with a taxi driver. In July 2017, the police were reportedly called to an eastern suburb of Paris on reports that Avia had bitten a taxi driver on the shoulder after an argument over a 12 euro fare. A police report reportedly obtained by Le Canard enchaine said that Avia had told cops who she was "in a condescending tone." The report also said that the driver had proposed driving the lawmaker to an ATM since his card terminal was malfunctioning, with Avia rejecting the idea and "bit[ing] the driver to make him stop" the car. The lawmaker denied biting the driver and accused him of attempting to rob and kidnap her. She was not charged for the alleged attack.