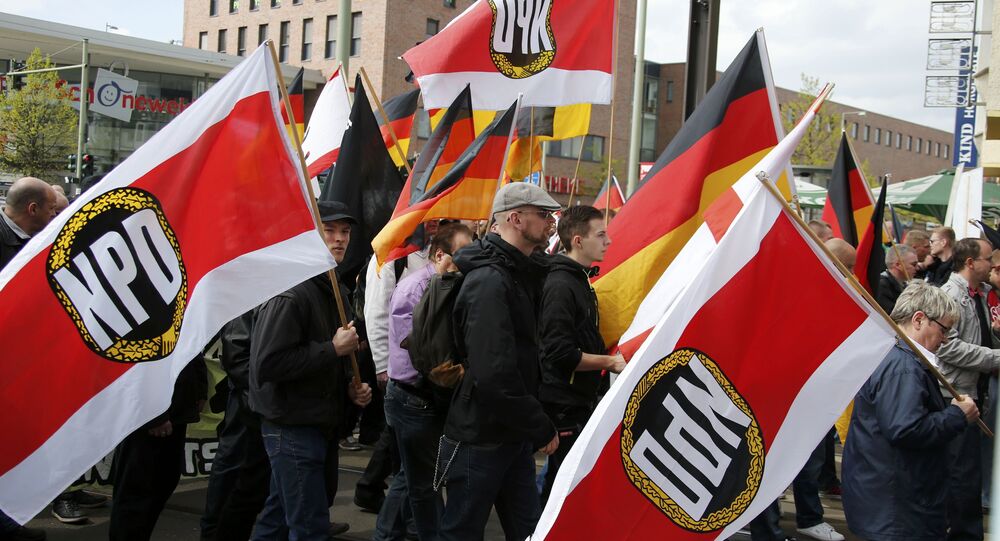 The video of the National Democratic Party (NPD), previously accused of neo-Nazism and anti-Jewish sentiment, promotes a campaign for creating "protection zones" for their compatriots. The party states that the authorities fail to secure safety and effectively fight crime, often committed by migrants and foreigners.

Germany’s police are determining if the commercial by the right-wing NPD, which patrols the urban trains of the so called S-Bahn system in Berlin, violates any criminal or civil laws.

The alleged commercial of the party’s project of “Protection Zones” claims private initiative is needed to secure safety and calls for the creation of “civil defense” forces. The NPD video specifically stresses that crimes are often committed by immigrants and people with a foreign background.

"The state fails to use its power monopoly sufficiently enough to protect our compatriots," former leader of NPD branch in Berlin Sebastian Schmidtke claimed in the video.

The clip shows members of its self-proclaimed people’s patrol squads in the public transport of the German capital. The alleged vigilantes wear red vests with a slogan "We create protection zones."

The clip was uploaded in June and brought into the spotlight by the media recently, triggering public discussions across the country.  A spokesman for Berlin’s Directorate of the Federal Police, which is in charge of securing order and safety in the S-Bahn, told the local newspaper  Berliner Morgenpost that the security forces are now checking the video.

"The monopoly on power lies with the state," he said.

Berlin’s State police have told the media that the law enforcement hasn’t found evidence that the clip has any criminal content yet.

The state-run railway company Deutsche Bahn, which owns the S-Bahn, has hasted to distance themselves from the video and stated it was created without their permission.

"It is certainly the task of the DB and the German police to keep stations and trains safe at a consistently high level. 750 security staffers of the DB are there to ensure it. They protect all passengers, regardless of their origin," the company said, as cited by the Morgen Post. They stated that no members of the NPD patrol have been encountered in trains.

The upper-house Bundesrat tried to outlaw the NPD, which wasaccused of neo-Nazism and anti-Jewish sentiment, in 2001, but the attempt failed after two years of judicial inquiry, prompting lawmakers to file a new petition in 2013. The trial came to an end in 2017 as Germany’s Constitutional Court rejected the application to establish the unconstitutionality of the NPD.

"The NPD acts in a systematic manner and with sufficient intensity towards achieving its aims that are directed against the free democratic basic order. However, (currently) there is a lack of specific and weighty indications suggesting that this endeavor will be successful," the judgment read.