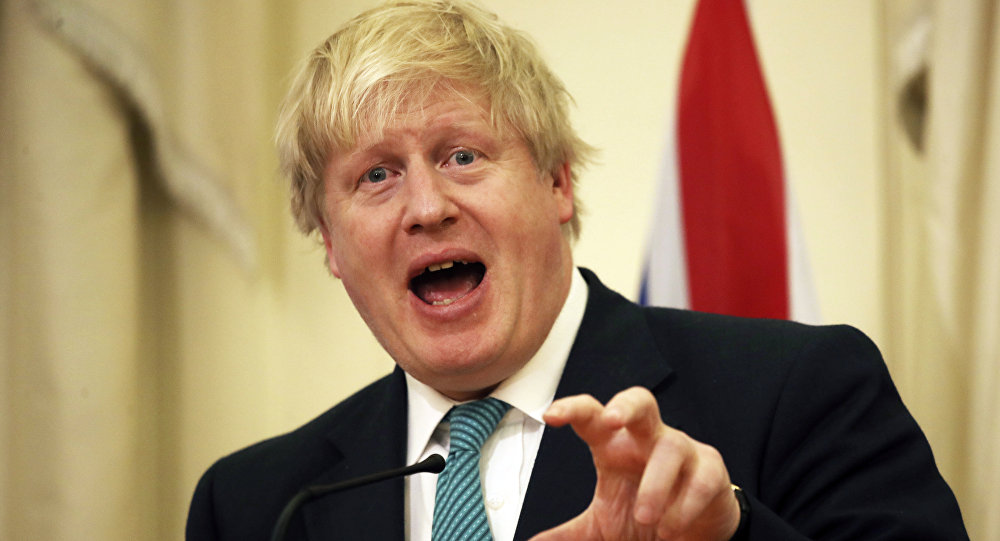 Those who argue for the end of British Armed Forces and the abolition of Britain's nuclear deterrent are all wrong, said the former UK Foreign Minister in an article, calling on the UK to believe in itself and its 'soft superpower' potential.

The "believe in yourself" pep talk by Mr. Johnson, published in The Telegraph focused on the opportunity for Britain in the wake of Brexit to "use every ounce" of hard and soft power "to go back out into the world in a way that we had perhaps forgotten over the past 45 years."

The United Kingdom joined the European Economic Community in in January 1973. Forty-five years later, Britain is negotiating the terms of its exit from the European bloc. The talks have caused a major rift in the UK government, which led to multiple resignations, including that of Mr. Johnson.

In his article Mr. Johnson chose to focus on the concept of 'Global Britain' and argue it should be championed by the UK, reaching out to the Gulf countries, the Association of Southeast Asian Nations and China.

While Mr. Johnson suggested that the "right free trade deal" would enable Britain to "do more business with the EU than ever," he also called on "rekindling old friendships in the Commonwealth, 52 of the fastest-growing economies in the world."

In essence, according to Mr. Johnson, Britain should seek new free trade deals with partners all over the world, having all the power to do so. All that's missing is confidence.

Mr. Johnson was for two years a high-profile member of the government that is still trying to strike the "right free trade deal" with the EU. He resigned following disagreements with the UK Prime Minister Theresa May on the proposed trade plan with the EU. Mr. Johnson slammed the government's approach, arguing that "many will struggle to see the economic or political advantage of that particular arrangement" but failed to propose a clear alternative to the arrangement.

The former FM also stressed in the article the significance of British diplomacy in advancing the nation's trade, culture and interests. He then rejected the idea that Britain's diplomatic strength is eroding.

"And don't tell me that the UK is losing diplomatic influence. The reverse is true. Just in the past few weeks we saw the UK help to concert the biggest ever expulsion of Russian spies, as 28 countries showed their repulsion at the use of Novichok in Salisbury. All told, 153 Russian spooks were sent packing. In diplomatic terms, the FCO hit it out of the park," Mr. Johnson said.

What the former FM called "hitting it out of the park," was based on a speculation by the UK government that the Russian state was involved in the poisoning of the former double-agent Sergey Skripal. While no evidence was presented by the British side, Mr. Johnson was caught in misleading the public on the origin of the nerve agent that stroke down Mr. Skripal.

Moreover, the former FM's numerous diplomatic blunders — including the distorted Novichok claim, the worsening situation of a British national in Iran, the insensitive Libya comments and many more — have prompted British politicians, pundits and members of public to call for Mr. Johnson's resignation.

For those who don't understand the concept of ‘Global Britain,' Mr. Johnson elaborated on what it means.

"You hear people use phrases like "second-rate power". Some say it is pretentious to think global, and that we should axe our aid spending. There are some — Jeremy Corbyn, for instance — who have argued for the end of British Armed Forces and the abolition of our nuclear deterrent and therefore the end of our membership of the UN Security Council. They are all wrong, and I have seen how championing Global Britain is in the financial interests of every family in this country," Mr. Johnson wrote.

He then described what the world sees when it looks at Britain. Mr. Johnson concluded his article in a manner, reminiscent of the ‘what is great about Britain' speech by Hugh Grant's character in the romantic comedy Love Actually.

"They see a first rate military power, one of the few capable of projecting force 8,000 miles. They see by far the most innovative economy in Europe; the tech capital of the hemisphere; the greatest financial centre; a place where one Oxbridge college boasts more Nobel prizes than France; that exports six times more television shows than any other European country and produces most of the world's top-selling musical artists. They see a country whose royal weddings transfix the globe; a country with 0.7 per cent of the world population whose sportsmen and women in the past five years have come second in the Olympics, won Wimbledon, and whose unfancied side has just come fourth in the football World Cup under the leadership of a man whose very waistcoat incarnates — in the eyes of our friends — the charm and eccentricity of the UK."

In the two years Mr. Johnson was in charge of representing Britain to the rest of the world, as the nation's top diplomat, he managed to insult followers of the Sikh religion, call Africa ‘a country,' advise Libya to "clear the dead bodies away" to attract tourism,  confuse Yemen with Lebanon, call for public demonstrations outside London's Russian embassy, anger his Italian counterpart over prosecco sales and promise to make "a Titanic success" out of Brexit.

Prior to his state visit in the UK, the US President Donald Trump said that Boris Johnson would make "a great prime minister."