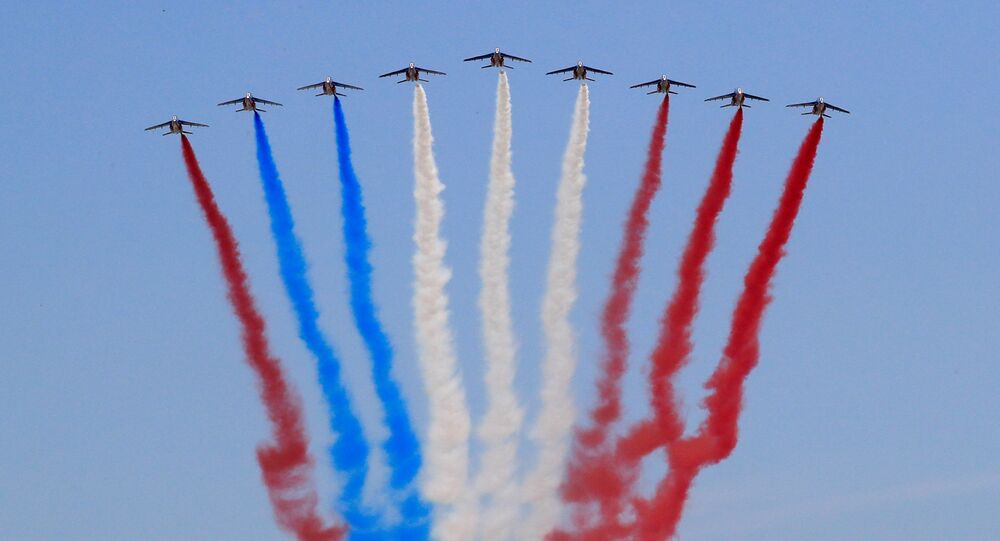 Hundreds of thousands of people have taken to the streets to celebrate Bastille Day in France, but the pomp-filled celebrations seem to have kicked off on the wrong foot.

In one of the most anticipated moments of the grandiose parade, nine Alpha Jets of the Air Force Patrouille de France acrobatic unit were supposed to fly over Paris and release colored smoke making up the tricolor blue-white-red French flag.

READ MORE: The French Take to the Streets on Bastille Day in Paris (VIDEO)

But in an apparent glitch, one of the aircraft might have overused one of the colors, leaving a trail of red smoke instead of blue, thus creating a lopsided flag of red, white, blue and then a thin strip of red again.

The mishap couldn’t go unnoticed on social media, with many poking fun at the blunder and sharing pictures and videos from the colorful parade:

TWEET: “Is there a small problem with the color?”

But this was not the only unlucky event that raised eyebrows during the parade in Paris: two police motorcycles, being part of a group tracing patterns on the Place de la Concorde, collided in front of President Emmanuel Macron and other distinguished guests. After briefly falling down, they fixed their vehicles and returned to the formation to the applause of spectators – it appeared that one of them had miscalculated the entry on the cobblestone plaza.

Bastille Day, the French National Day, commemorates the storming of the Bastille prison in Paris on July 14, 1789 – the flashpoint of the French Revolution.