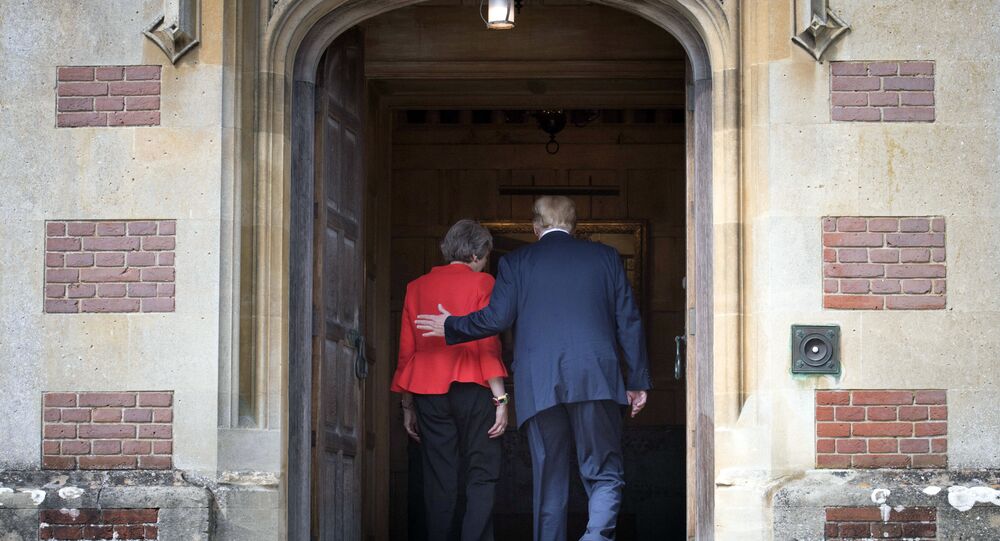 Donald Trump's first official visit to the UK as president comes between a NATO summit in Brussels and a meeting on Monday in Helsinki with Russian President Vladimir Putin.

During a brief visit to Britain, on the heels of a tense NATO summit in Brussels, President Donald Trump scrambled to undo the damage caused by an interview in which he questioned Prime Minister Theresa May’s Brexit plans, warning they might hamper a bilateral trade deal with the United States, The Independent wrote.

At a joint news conference with Theresa May after the two had held one-on-one talks at the PM's Chequers country retreat 40 miles from London, Trump heaped praise on May calling her “smart”, “tough”, “capable” and “incredible.

© REUTERS / Simon Dawson/File Photo
'Hundreds of Thousands' to Hit UK Streets to Protest Trump Visit - Campaign Leader
“I would much rather have her as my friend than my enemy,” he added.

Mentioning reports he had heard about Theresa May’s EU withdrawal plan threatening to torpedo a proposed trade deal between the two countries, Trump noted that, after reading May’s Brexit white paper, and being brought “up to speed” by the prime minister, he was convinced that such a deal “will absolutely be possible.”

Trump described Brexit as a "very tough situation… between the borders and the entries into the countries and all of the things."

He said that a US-UK trade deal "will absolutely be possible, hours after he told The Sun Theresa May's Brexit plan could kill an agreement.

“The only thing I ask is that she works it out so that we can have very even trade."

He also described the UK-US relationship as the “highest level of special.”

Theresa May said the US was "keen" to do a deal with the UK, adding that Britain “will do a trade deal with them and with others around the rest of the world."

“As we prepare to leave the European Union, we have an unprecedented opportunity to do more. It’s an opportunity to reach a free trade agreement that creates jobs and growth here in the UK and right across the United States,” May said.

She insisted that the government's Brexit agreement harshly criticized by supporters of a "hard Brexit," fully “delivers" on the referendum vote.

He also blamed political differences in the US for hampering much-needed normalization with Russia.

He also said that US-Russian relations could normalize even with Crimea remaining part of the Russian Federation.

“This was an Obama disaster. There’s nothing much I have to say about it, other than we will look at that just like I’m looking at many other disasters that I’ve taken over. I’ve taken over a lot of bad hands. And I’m fixing them one-by-one,” Trump said.

He reiterated the need to mend fences with Russia.

“I’ve met [Putin] twice, maybe three times, two-and-a-half times. If we could develop a relationship which is good for Russia, good for us, good for everybody that would be great,” Trump noted.

Donald Trump and First Lady Melania were later welcomed by Queen Elizabeth II at Windsor Castle. They shared a few words after which the Queen politely indicated they should stand either side of her for the Coldstream Guards’ rendition of the American national anthem.

For Donald Trump, Britain is a brief stopover between the NATO summit in Brussels where he hammered the German Chancellor Angela Merkel, and a Monday meeting with Russia’s President Vladimir Putin in Helsinki, which he expects to be “the easiest” part of his week-long European trip.