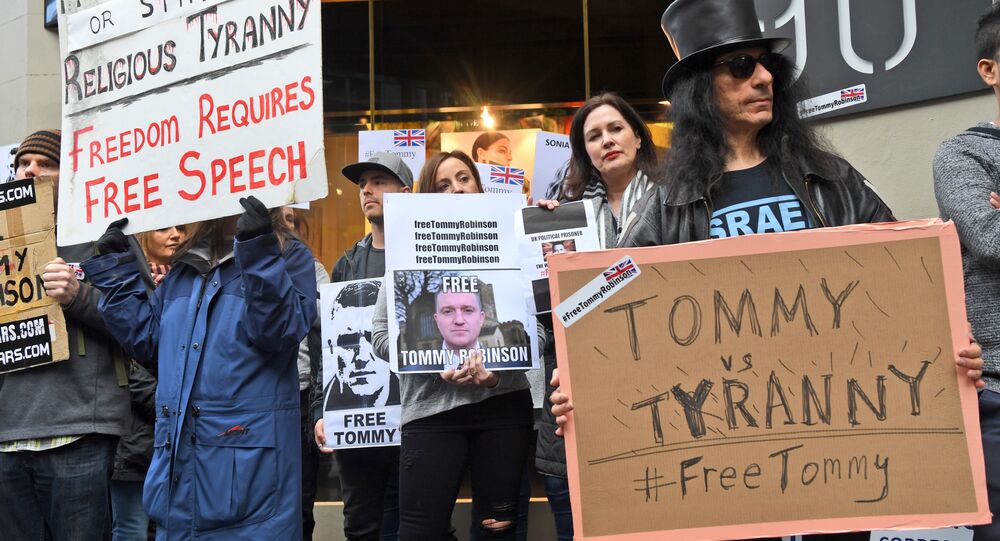 The co-founder of the right-wing English Defense League, Tommy Robinson was sentenced to 13 months imprisonment for contempt of court with a Facebook live broadcast from outside Leeds Crown Court on May 25.

British right-wing activist Tommy Robinson, whose real name is Stephen Yaxley-Lennon, is set to appeal his sentence on July 18, but he will not ask for reconsideration of his conviction for contempt of court, which he has admitted to.

© AP Photo / Kirsty Wigglesworth, file
Free Tommy: Hundreds Protest in London Demanding Release of Jailed EDL Co-Founder Tommy Robinson (VIDEO)
According to local media, his supporters have planned to launch another “Free Tommy Robinson” march on Saturday to converge with the Welcome Trump procession in London to mark the US president’s first state visit to the United Kingdom.

The police have already imposed restrictions on where the demonstrators can go “in order to prevent serious disorder and disruption to Londoners.”

“Both events are due to take place on Saturday and the conditions have been imposed due to concerns of serious public disorder and disruption to the community. A recent event involving the Free Tommy Robinson group on June 9 resulted in serious violence in central London. A significant policing operation will be in place for the duration of both events on July 14, which is designed to prevent trouble from flaring up and facilitate peaceful protest,” The Independent cited a spokesperson for Scotland Yard as saying.

Why Was He Arrested?

The 35-year-old Robinson was initially accused of “breach of the peace” and arrested in late May while livestreaming outside a courthouse in Leeds, where a gang rape trial was being held.  Later the same day he admitted to the contempt of court charge and was sentenced to 13 months in jail.

Judge Geoffrey Marson QC activated a three-month sentence for a previous offense: Robinson was on a suspended sentence for contempt of court for using a camera in Canterbury Crown Court in May 2017, where he had tried to film defendants, who were on trial over rape charges, while the hearing was still underway. The judge also added 10 months for the new offense.

Filming outside the court in Leeds for over an hour, Robinson said that there was a certain reporting restriction on the case, and admitted that he was aware he could “face prison” for contempt of court.

“I have to be super careful, you see, because when I was coming to these court cases, part of what the police did was they dawn raided me and they put me on a contempt of court charge, which would mean that I could face prison,” he said in the video.

After more than an hour of livestreaming, which was watched by some 10,000 viewers, law enforcement officers were seen approaching the activist to arrest him for a “breach of the peace.”

© AFP 2020 / Daniel LEAL-OLIVAS
#FreeTommyRobinson: Over 400,000 Sign Petition Demanding Release of UK Right-Wing Activist
Robinson’s arrest has sparked a wave of protests both in the UK and abroad, including in Canada and Australia, with his supporters holding placards and banners reading #FreeTommy and brandishing flags – the St George’s Cross, the Union Jack and the UK Independence Party (UKIP) logo.

Over 400,000 people signed a Change.org petition the day it was launched, demanding that he be freed, while netizens started using the hashtag #FreeTommy to raise awareness about his arrest, which they believe has been insufficiently covered by the British media.