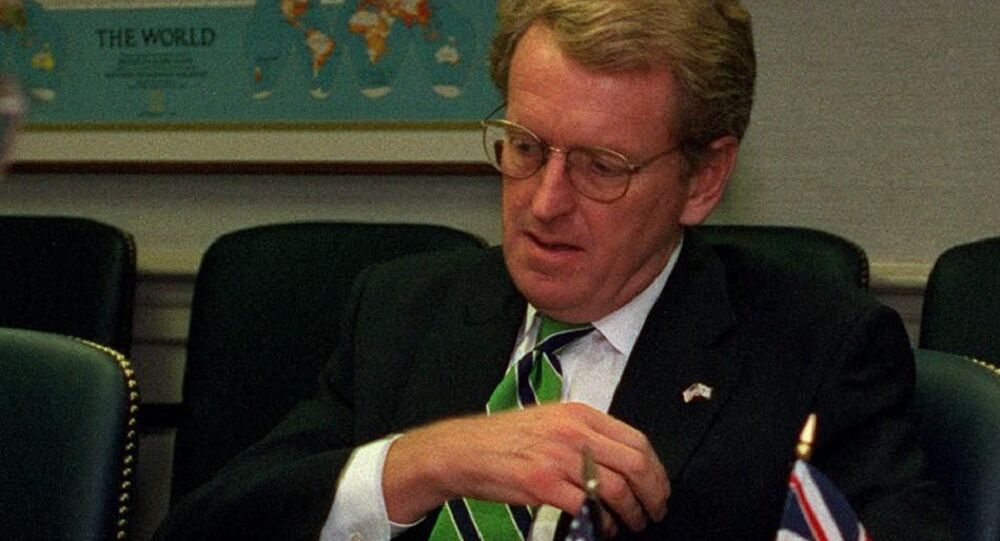 The former British ambassador to the US, who has repeatedly spoken out in favor of President Donald Trump, was brutally attacked on the London tube. The incident has prompted speculation that the assault was “politically motivated.”

74-year-old Christopher Meyer, who served as British ambassador to the United States from 1997 to 2003, was admitted to St Mary’s hospital in Paddington with injuries to his left eye, nose and lip. An extremely graphic photo of him in a hospital bed showed his face covered with blood and his eye swollen.

“He looks terrible. His left eye is like a golf ball and bleeding, the nose looks like it could be broken. I’m absolutely shocked by the level of the brutality. They really beat him. It’s appalling. He hasn’t had an x-ray yet. He doesn’t remember anything. The first thing he remembers is the police,” his wife, Baroness Meyer told The Times.

In wake of the attack, two teenagers have been arrested over the brutal assault, a spokesman for the British Transport Police stated.

“A 16-year-old boy from Hillingdon and a 15-year-old girl from Croydon were both arrested on suspicion of assault occasioning grievous bodily harm. They have been released under investigation while enquiries into the incident continue,” he said.

Even though police suspect that Meyer became the target of a robbery at Victoria station in London, his wife said that the perpetrators took nothing. She said that at first she thought the assault, which took place a day before President Donald Trump’s first official visit to the UK, dogged by mass protests, was “politically motivated.”

“At first I thought that the attack was politically motivated. He is opinionated, and sometimes people have different opinions, but the police told me they believe that it is more likely that they might have wanted to rob him. Nothing was taken, but the transport police intervened quickly,” she elaborated.

I have been inundated by well wishing messages and emails. Thank you to all who have sent them and thank you @BTP and @LAS_JRU for all your help. @SirSocks will be deeply touched. London is a fantastic city. We need to pull our energies to keep it that way but make it safer.

WARNING: The following photo is graphic and may offend sensibilities.

Thoughts with former British ambassador to the US, Sir Christopher Meyer, who was brutally attacked yesterday. He has been doing a lot of media about how important the Trump visit is. Police say it looks like a robbery — we’ll see. https://t.co/XS1MyfoAFY

Hours before the attack, the 74-year-old diplomat had penned an op-ed for The Times in which he warned that UK Prime Minister Theresa May would be left “to pick up the pieces” of any fallout from POTUS’ attendance at the NATO summit in Brussels.

In a separate piece for The Independent, he wrote that the US “is our single most important partner and ally,” while Trump “is its democratically elected leader,” whether the Brits liked it or not.

“With all this is mind, May’s meeting with Trump could – perhaps should be one of the most consequential Anglo-American summits since 1945,” Meyer wrote.