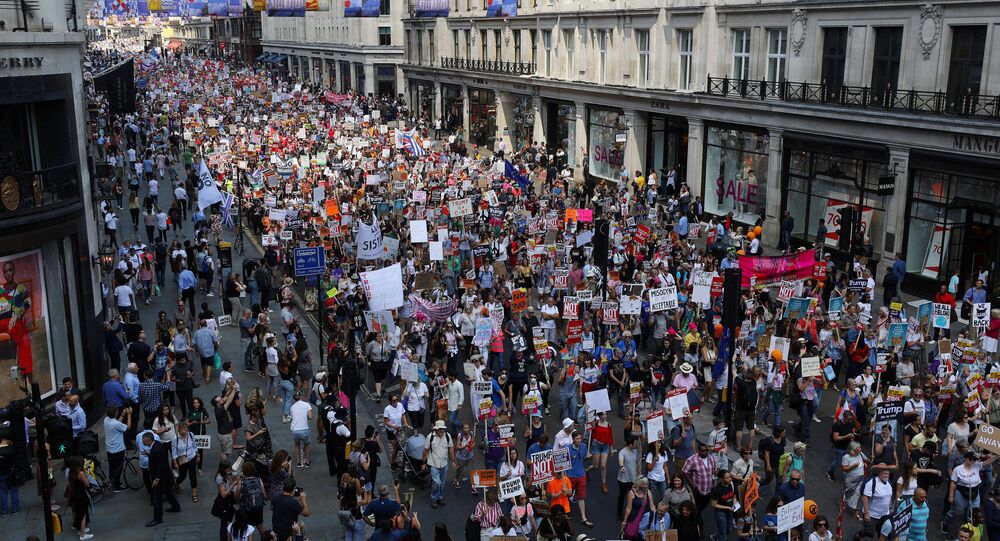 People gathered in London to protest against Donald Trump's four-day visit in the UK. Earlier in the day a six meter tall balloon depicting Trump as a diaper-clad baby flew over the British capital.

US President Donald Trump has arrived in the United Kingdom on Thursday for his first official visit since taking office in January 2017.

US President Donald Trump and UK Prime Minister Theresa May are set to hold discussions in London on Friday as the British government remains embroiled in a crisis over Brexit and the New York billionaire faces hostile crowds of protesters.

© Sputnik
London Against Trump: Mass 'Resistance' Rally in Pictures
The US and UK leaders are scheduled to meet at Chequers, the weekend home of prime ministers, followed by a joint presser before the Trumps meet Queen Elizabeth II.

Meanwhile, tens of thousands of people holding placards and posters gathered in central London to protest against Donald Trump's visit. Protesters will march through the city's streets from BBC HQ to Tragalgar Square. The march was organized by several trade unions and campaign groups, such as Stop the War, Friends of the Earth and the Campaign for Nuclear Disarmament.

Earlier in the day, a baloon depicting the US president as nappy-wearing baby flew outside the British parliament.