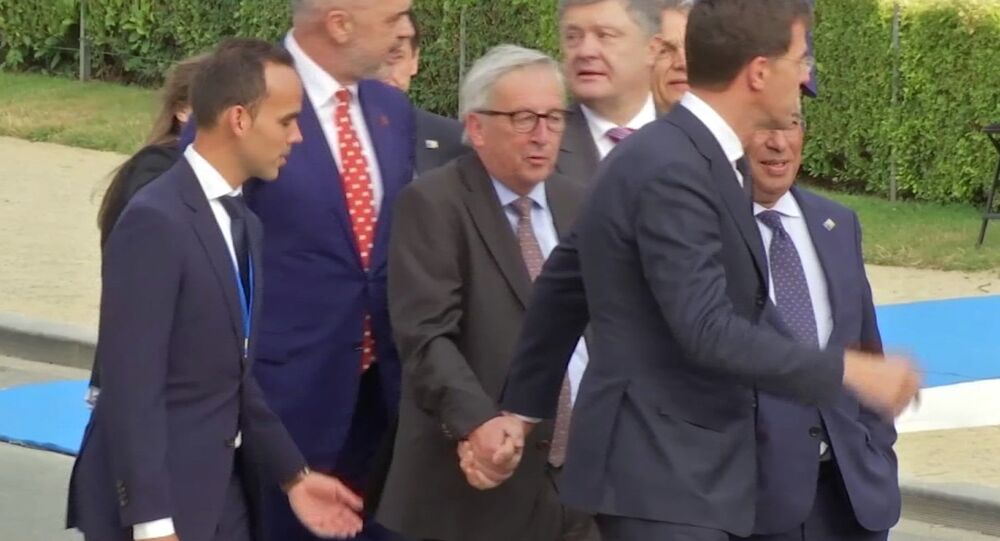 Footage of European Commission President Jean-Claude Juncker stumbling and being helped down stairs by world leaders has sparked fresh speculations as to whether he was drunk while on duty, whereas others are fearing for his health condition.

European leaders, including Ukraine’s President Petro Poroshenko and Dutch Prime Minister Mark Rutte, stepped in to support Jean-Claude Juncker, who was seen swaying and losing his balances several times at an event at Parc du Cinquantenaire in Brussels on Wednesday.

He was caught on camera struggling to walk down stairs and being held by the arm, nearly falling over backwards onto President Poroshenko.

Media outlets have speculated that the EU chief has drinking problems, with social media users dismissing his behavior as “embarrassing.”

Sorry, am I being naive. Is the implication Juncker is so drunk that he can barely walk or even get down steps, or was he just not feeling well? @TomMcTague https://t.co/XaQQet8J85

Missed the point completely. No excuse. And try to hide your bias next. I was stating fact: Juncker was drunk off his ass according to multiple accounts. An embarrassment! LOL! Defend that 😉

In light of media speculation, European Commission spokesman Margaritis Schinas decided to clarify the situation even though Juncker's office had earlier declined to comment the incident, citing privacy concerns:

“The president Wednesday night suffered from a very particularly painful attack of sciatica accompanied by cramps. The president has himself publicly stated that this sciatica affects his ability to walk. That was unfortunately the case Wednesday night. The president wishes to thank publicly Prime Ministers Mark Rutte and Antonio Costa [Portugal’s PM] for assisting him during this painful moment. He is taking medication and feels better,” he told a daily briefing.

When asked if Juncker was drunk, Schinas dismissed the allegations as “tasteless.”

Juncker previously revealed that he was suffering from sciatica – pain along the sciatic nerve which can affect a person’s mobility and movement. He was later seen leaving the NATO event in a wheelchair.

EU Commission President J-C Juncker’s office say it’s “not appropriate to discuss health issues publicly” after 🎥 emerged of him unsteady & supported by other leaders at #Nato dinner.
He’s said before that sciatica makes walking tricky. Critics accuse him of being drunk👇 https://t.co/Tit2Iw2on5

“As far as I know, he [Juncker] has no serious health problems, but he has had a back problem for a while. It is a problem in a sense that he sometimes has these pain attacks.”

This is not the first time that the EU chief is suspected of being drunk during a major international event: at a 2017 UN peace summit in Geneva, media outlets cited unnamed diplomatic sources as saying that Juncker was “very visibly” drunk.

“It was clear Juncker was very well refreshed. He was bumping around into things, and going up to junior members of staff for conversations. It was odd behavior, and a little bit embarrassing for everyone,” a source told The Sun.

At the time, a spokeswoman for Juncker called the allegations “insulting,” pointing out that “the British press is in campaign mode.”

The Geneva incident followed an EU summit in Latvia in 2015, when Juncker was filmed slapping a number of EU leaders in the face and calling Hungary’s Prime Minister Victor Orban “dictator” before also slapping him across the face.