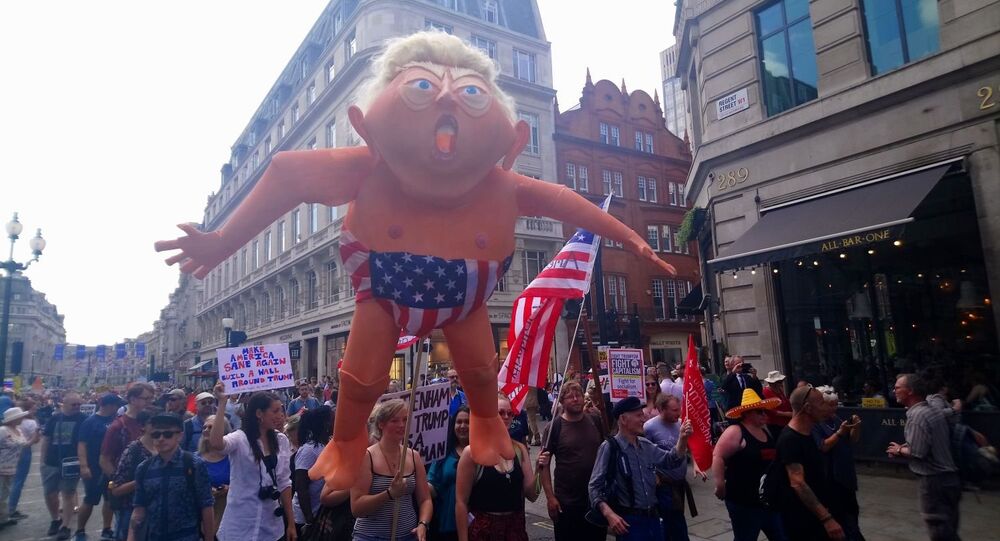 US President Donald Trump’s state visit to Britain has been met with largescale anti-Trump protests in the capital, with others scheduled across the UK. Attending today’s main protest in central London, a Sputnik reporter discussed his visit and policies with demonstrators.

With thousands of protesters gathering in central London today, there was no shortage of opinions, not only on Trump himself, but also on Brexit and the prospect of a UK-US trade deal.

"I think Donald Trump’s comments on Boris Johnson being a good prime minister do make sense given the current political climate because this country voted to leave the EU, and the will of the people is not being implemented by the PM [May.] That’s obviously put our trade deal with America at risk, so it makes sense that Trump would complement Johnson as a man who wants to get Brexit done and done properly," Max, a political activist, told Sputnik.

​On the other end of the polarized Brexit debate, an activist, widely known as EU Super Girl, described the upcoming meeting between Trump and UK Prime Minister Theresa May as "laughable," and expressed her pro-EU views.

"So I’m known as #EUSuperGirl. most of the time I’m travelling around Europe and the UK trying to stop Brexit. I’m young European of the year this year. But I also hate Trump, so I thought I’d rock up and I’ve been singing some political protest songs and giving out copies of my book," a British protester told Sputnik.

Supergirl protesting against #DonaldTrump in Parliament Square, London. She calls on locking him up #TrumpUKVisit https://t.co/ppqA2LyCIk pic.twitter.com/mAsxF9Fshl

​​"I’m not a fan of Theresa May, I think the meeting today is going to be pretty laughable, with all the resignations this week," the campaigner added.

​She also said she doesn’t agree with any of Trump’s protectionist and divisionist policies, and insisted he holds sexist and racist views which are "totally unacceptable."

​Meanwhile, a local activist said it wasn't appropriate for the UK to host Trump, given the laws he's advocated and passed during his presidency.

"I don’t like the idea of Trump visiting based on his poor human rights abuses and laws he’s passed, and his views on so much. He’s certainly a powerful leader and a close ally of the UK, but I think she [PM Theresa May] should be condemning a lot of the words and actions he’s done over the presidency," Simon, an American expat living in London, told Sputnik.

Simon, an American in Britain thinks that instead of rolling out the red carpet for #DonaldTrump, the UK PM should be condemning his words and actions https://t.co/ppqA2LyCIk #TrumpVisitUK pic.twitter.com/NSsguNIRjc

​Attending the protest, a man impersonating Trump told Sputnik "Britain loves me and I’m glad they’re all out on the street for me. It’s incredible. They are celebrating sexism and bigotry. I love it, absolutely love it. I’m not excited to meet the Queen – she’s only a 2 out of 10. Theresa May, I’ll give her two-and-a-half. I can’t wait for Scotland. I’ve got a few golf games to play."

Britain loves me, it is incredible — #Trump impersonator talks to Sputnik amid an anti-Trump protest in London https://t.co/ppqA2LyCIk pic.twitter.com/WvYTmMdOZl

​READ MORE: Ex-UK Ambassador to US Savagely Attacked Ahead of Trump's Visit to London