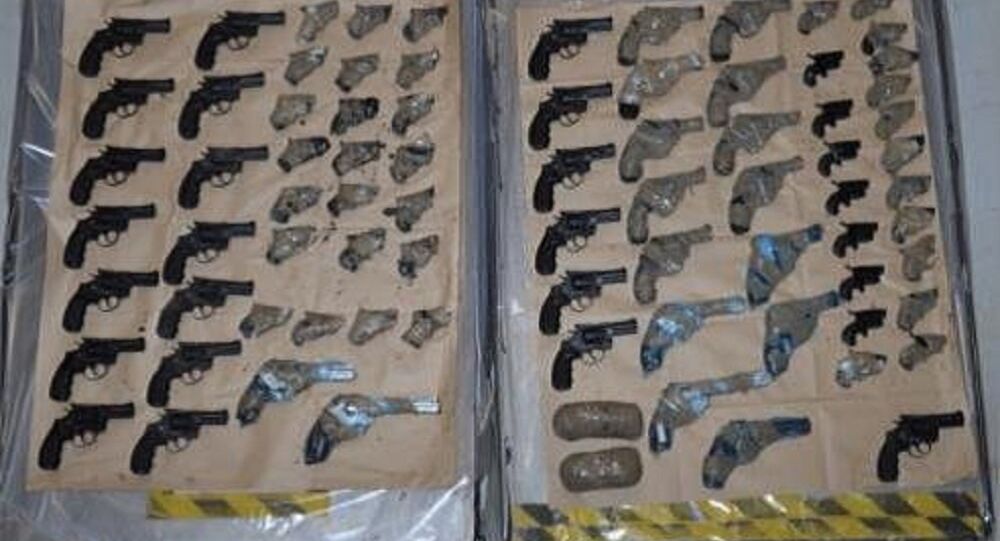 Three men have been convicted of smuggling 89 guns into Britain, hidden inside engine blocks. The National Crime Agency says previous consignments which had got through had ended up in the hands of London gangs.

Steven Spires and Michael Nicholls were convicted at Blackfriars Crown Court in south London on Thursday, July 12, after a three-week trial.

Denis Kolencukov, 23, a Russian living in the UK, pleaded guilty to the charges before the trial of Spires and Nicholls. All three will be sentenced on August 3.

The trial heard Kolencukov's phone number was saved in Spires' phone under the name "Boris the bullet dodger".

The guns were discovered on July 1, 2017 at Coquelles, near Calais, after a joint operation between the National Crime Agency and the Metropolitan Police.

Police found 42 Ekol Arda 4mm Flobert revolvers and 37 Atak Streamer 6mm handguns as well as thousands of rounds of ammunition made by Sellier and Bellot.

© Photo : National Crime Agency
The guns were hidden in engine blocks which were brought into the UK from Poland

"The guns were wrapped in black foam tightly packed into the enginers along with silica gel packets," prosecutor, Julian Jones QC, told the trial.

They had been expertly hidden inside two engine blocks which had been picked up at Bolesławiec on the Polish/German border by a minicab driver and were being driven to an industrial estate just west of London on trailers.

Suspects Were Kept Under Surveillance

Two days later Spires and Nicholls were arrested in Iver, a small town near Slough, west of London, after NCA officers carried out surveillance on them and saw them going to and from a shipping container.

When the NCA officers swooped on the pair they discovered a plastic bag in Spires' white van which contained nine Ekol Arda 4mm handguns identical to the weapons found in Coquelles.

Spires made no comment when questioned by police but Nicholls claimed he had been driving the van as a favor for Spires, who he said was banning from driving.

But fingerprint, phone and other evidence linked both men to the conspiracy.

Police also interrogated Spires' phone and found he had been reading on the BBC News website about the guns being seized and had read of Kolencukov's arrest.

This forced him and Nicholls to go to the container in the hope of moving the guns before the police found them.

"All three defendants were involved in an organized business to source a large quantity of lethal handguns from the Czech Republic and smuggle them, concealed in engine blocks, via Poland into the UK," said Mr. Jones.

Janusz Micek, 59, the Polish minicab driver who had brought the engine blocks into Britain, was originally accused but charges were dropped when the authorities decided he had been duped.

Five Polish passengers in Mr. Micek's Mercedes Viano people carrier, who were being transported from Bolesławiec to the UK, were released without charge.

They had simply been in the wrong place at the wrong time.

© Photo : National Crime Agency
Denis Kolencukov, who was nicknamed Boris The Bullet Dodger by another member of the gang

Mr. Jones said the evidence showed Kolencukov had bought weapons in March 2017 from a gun shop in the town of Turnov in the Czech Republic, where they were legally sold.

The police believe Kolencukov used Mr. Micek to deliver several similar consignments of weapons to Britain before the plot was eventually discovered.

Mr. Jones pointed out five more handguns and 322 rounds of ammunition from the same source were discovered on March 15, 2017 when police stopped a speeding car on London Bridge and arrested two men.

Thomas Parish, 19, and Michael Redford, 24, were both jailed for five years.

"There remains an ongoing supply of firearms into the UK from overseas. In this regard, trafficking from Eastern Europe through near Europe is a key concern," said the National Crime Agency in a statement released after Spires' and Nicholls' convictions.

The National Crime Agency said the Czech parliament has agreed to alter its constitution to allow for firearms to be legally held when national security is threatened.

"This amendment represents a challenge to EU gun control rules which typically restrict civilians from possessing certain kinds of semi-automatic weapons," said the NCA in a statement.

"Although the level of firearm crime in the UK remains one of the lowest in the world, since 2016, these weapons have been seen more frequently in the UK so it's vital that we work collectively with our partners to take action, across borders, to ensure the risk is minimised. Stopping this supply has protected the public and in no doubt prevented potential fatal gang related shootings. We will continue to target organised networks and disrupt their criminal activity," said Detective Inspector John Nolan.

Bang! Five Most Unusual Handguns in the World (PHOTO, VIDEO)