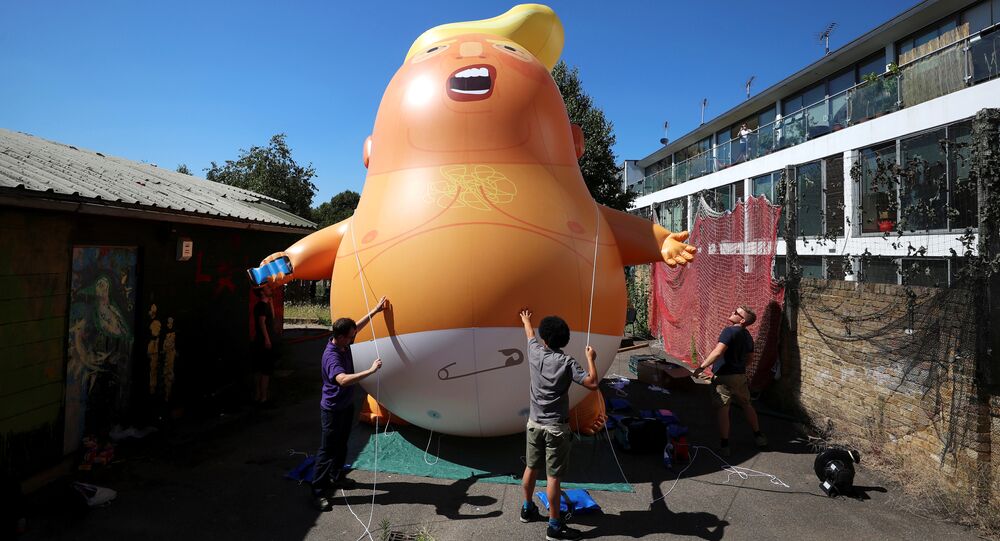 LONDON (Sputnik) - The upcoming UK visit of US President Donald Trump will be met by hundreds of thousands of protesters and may have a scale comparable to the demonstrations against the Iraq War, Nick Dearden, a senior figure in the Stop Trump Coalition campaign group, told Sputnik on Wednesday.

"I'd say that at the moment we're looking at — at least one hundred thousand taking part, maybe two hundred thousand. It's gotten bigger and bigger as time has gone by … This is going to be happening all over the country, so I think added together it will be hundreds of thousands, so I'd say this is probably going to be the biggest week-day protest we've had in fifteen years, probably the biggest since George W. Bush came in the middle of the Iraq War," Dearden, who is also director of Global Justice Now campaign group, said.

According to Dearden, protesters have no hope of changing Trump's mind. The main goal is to show solidarity with opponents of the president’s policies in the United States and send a strong message to the UK government, he noted.

"We're not going out there hoping to change Trump's mind. We're going out there for two reasons. One to express solidarity with those in America who are fighting his administration, particularly those most affected, but also to say to our own government that you can't appease or compromise with a bully like Trump. That's how he behaves – everything is an aggressive business deal with him," the campaigner argued.

Dearden stressed that he expected no trouble from the side of the protesters, noting that people would be coming with their families and aimed to express their protest peacefully. Dearden also noted that police "have gone completely over the top in terms of presence" on the streets, which might somewhat complicate the organization of the protests.

"As far as I can see this is more like the 2002 anti-Iraq war demonstration, that was so peaceful and diverse and so different… but I'm certainly worried that too much heavy policing is going to irritate people because they are simply using their democratic right to protest and should be facilitated in that by the government," he pointed out.

© REUTERS / Toby Melville, AFP, Jewel Samad
Donald Trump Might Meet Johnson Despite His Resignation – US Ambassador to UK
Trump is expected to leave for the United Kingdom after the culmination of the two-day NATO summit in Brussels on Thursday. The long-delayed visit is supposed to be clouded by a number of protests staged by opponents of the president’s rhetoric and policies. On Sunday, Trump will depart for Helsinki, where he is to meet Russian President Vladimir Putin at their first full-fledged meeting.

During the visit, Trump is scheduled to meet with both Queen Elizabeth II and Prime Minister Theresa May, and also believed to be planning to host an exclusive black tie event with some 150 business leaders at a yet undisclosed location. The president is expected to spend the weekend in Scotland, and then depart for the Finnish capital.

It is noteworthy, that, commenting on a string of the upcoming summits, Trump said on Tuesday that his July 16 meeting with Russian President Vladimir Putin in Helsinki might, in fact, be "the easiest of them all," obviously citing the tough talks with partners in Brussels and the pending protests staged by his opponents in the United Kingdom.