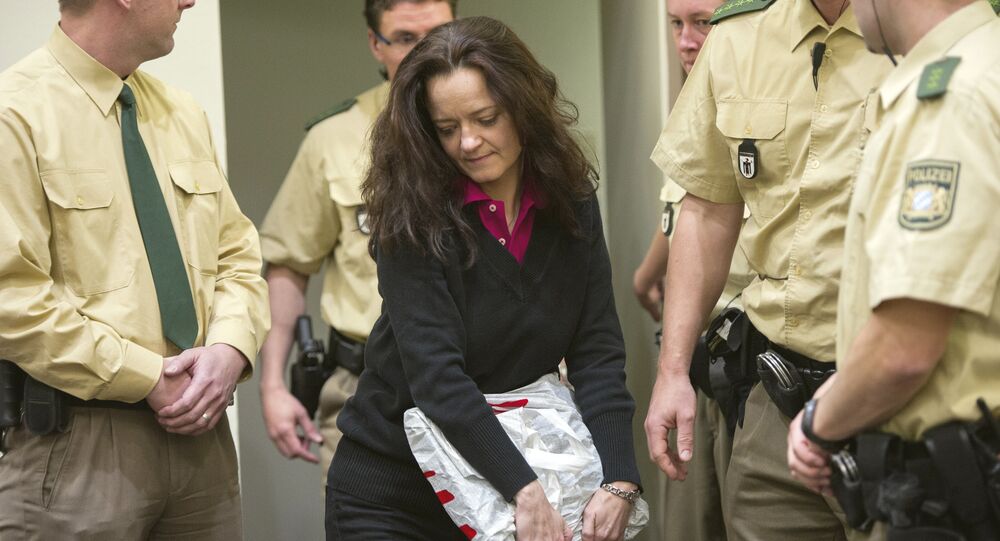 The trial against the National Socialist Underground, branded “one of the most important in Germany's post-war history,” has come to an end after 5 years. Although Beate Zschäpe, the last of a trio which killed non-Germans and launched bomb attacks in the 2000's, has to spend life in jail, some demand further investigations.

The Higher State Court in Bavaria’s capital Munich has found 43-year-old Beate Zschäpe guilty of attacking and murdering non-Germans.  She and her deceased alleged former lovers Uwe Mundlos and Uwe Boehnhardt committed the hate crimes; they called themselves the National Socialist Underground (NSU). She has been convicted to life imprisonment, which is the highest possible sentence in Germany.

The court also acknowledged the “exceptional severity of the crime,” excluding the possibility of a parole for good conduct after 15 years in jail, which is common practice for Germany.

Besides Zschäpe, former NPD party member Ralf Wohlleben was found complicit of 9 killings and sentenced to 10 years for providing help to the murderers, while Andre Eminger was cleared of the complicity accusations and got two and a half years for supporting terrorism.

The extremist terror cell murdered 9 men of Turkish and Greek origin and a German policewoman between 2000 and 2007. They also committed two bomb attacks in Cologne; dozens were injured. The trial, branded by the German media “one of the most important trials in Germany's post-war history” began in 2013 after years of unsuccessful investigations.

The country’s security forces were able to trace the NSU only in 2011, when the group’s two male members killed themselves in an alleged suicide pact following a failed bank robbery. Several days after their bodies were found in a burned-out van,  Zschäpe surrendered to the police. For years before that, the investigators had pursued false tracks and misunderstood the far- right extremist background of the crimes, linking the cases to the Turkish organized crime as well as suspected closest family members.

This triggered public outrage in Germany, while defenders of the families' victims claimed the country's intelligence agency had destroyed evidence and protected its informants in the extremist groups.  The Bundestag (federal parliament) and several state parliaments set up special committees to investigate the authority’s errors.

​Against racist violence we don’t only use the strength of the law. We need the diversity of our open societies to deal with intolerance and hatred.What the perpetrators have done is irreparable. The victims will never be forgotten.

Meanwhile, some lambasted the idea that the authorities have finished investigating the NSU and neo-Nazi underground with the verdict.

“Angela Merkel and many others promised the victims a complete investigation. That promise was broken," chairman of the Turkish community organization TGD Gökay Sofuoglu said in a statement, cited by the German broadcaster Deutsche Welle.

​With the verdict in the NSU trial the complex is not cleared up. There is much evidence, suggesting that the NSU consisted of more than three neo-Nazis. Victims were stigmatized, constitutional protectors obstructed the investigation. Relatives have a right to the truth.

Additionally, the campaign “No Final Line” protested the court’s ruling during a rally in Munich, stating that the verdict was a slap in the face for the victims’ relatives.