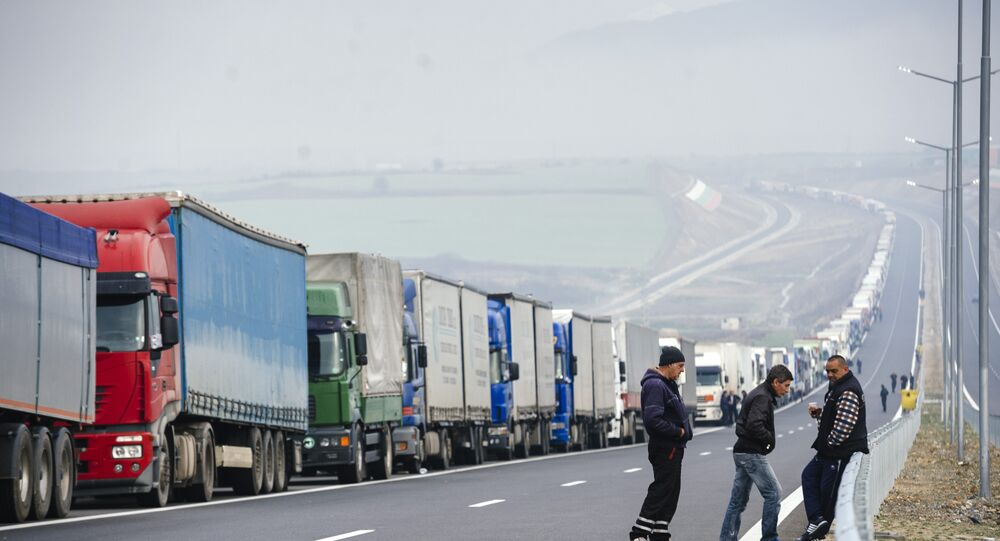 Mr. Dowdall made the comments on Friday, July 6, while giving an overview of the work of Project Invigor, an NCA-led taskforce which is targeting people smuggling in the Mediterranean and at the UK border.

The Deputy Director of Britain's National Crime Agency, Tom Dowdall, has claimed many Eastern European truckers were giving in to financial temptation and being paid to smuggle migrants into the UK. Drivers can get around £2,000 (US$2,670) for turning a blind eye but the fee they receive from traffickers can go up to £25,000 ($33,352).

In 2001 a Dutch trucker, Perry Wacker, was jailed for 14 years for manslaughter by a UK court after 58 Chinese migrants suffocated in the back of his lorry. They had been hidden in a cargo of tomatoes and were discovered at Dover docks in June 2000. Wacker was paid £17,500 ($23,346).

The number of people breaking into Britain through Dover has plummeted since we got the Calais Jungle dismantled. Yet this case underlines why we must remain vigilant, crackdown on the smugglers — and end their evil trade of modern slavery. pic.twitter.com/EXdAvyV44b

Mr. Dowdall said although the numbers involved were lower than at the height of the migrant crisis in 2015 they had started creeping up again. Last year the number of migrants in the eastern Mediterranean went up 47 percent and rose 75 percent between Morocco and Spain but fell 75 percent in the central Med, after traffickers hit difficulties in Libya and Italy.

He said while some gangs had tried to bring migrants across the Channel from France and Belgium by boat, the vast majority were smuggled into the UK in the back of trucks.

Albanian people smuggler jailed for 6 years — Senior investigating officer, Martin Grace: "Afrim Xhekaliu was clearly an important part of an organised crime group smuggling people into the UK. His lack of maritime skill and experience placed the lives of those aboard in danger." pic.twitter.com/3sdWKNIpAC

"The principal way that people are being smuggled into the UK is in lorries across the English Channel. Because that's where the highest volume of traffic is, crime networks think they can simply lose themselves in high volume of movements," he said.

Mr. Dowdall said prior to the closure of The Jungle in Calais, there were around 10,000 migrants in Calais seeking to cross the Channel. Now that number has fallen to around 300.

But he said gangs were increasingly choosing to load migrants onto trucks in Belgium. The lorries are then driven across the border into France and then on to the UK.

"It makes it more difficult for us to co-ordinate. We are co-operating but we need greater co-operation between the authorities in Belgium and the UK," said Mr. Dowdall.

"In order for the organised crime groups to be successful they must have access to complicit lorry drivers to be able to move people across the Channel to the UK," he said.

"The organized crime networks target certain truck stops in Eastern Europe and near Calais. Sometimes they threaten drivers but often they are finding drivers who are prepared to bring in migrants for a sum of money. Complicit drivers are the largest single service provider for traffickers," said Mr. Dowdall, who said some truckers deliberately disable security on their trucks to allow migrants on board.

Today in 2001 a Dutch lorry driver is sentenced to 14 years in prison for his part in the deaths of 58 Chinese illegal immigrants.
They were found suffocated in the back of Perry Wacker's lorry when it was searched at the ferry port in Dover last June after arriving from Belgium pic.twitter.com/FMDIhS1zeF

Mr. Dowdall said the majority of truckers were law-abiding but a "small hardcore" were prepared to help the traffickers for financial gain.

Mr. Dowdall said the organized crime networks were often run by Iraqi Kurds, Albanians or Afghans but there were plenty of British criminals who were looking to take a piece of the action.

He said the gangs were subjecting migrants to "higher risk" by hiding them in "coffin hides" — tiny compartments hidden inside refrigerated lorries.

The UK Border Force use a wide variety of technologies — X-rays machines, scanners, carbon dioxide monitors and heartbeat detectors — as well as sniffer dogs but he said they were sometimes overwhelming by the sheer number of trucks coming through ports like Dover.

"Hard-sided and refrigerated vehicles are difficult to scan and there can be 10,000 HGVs coming into the UK from France on a busy day. All of that presents a challenge. You can't simply rely on those final tests at the border," he said.

Mr. Dowdall said the traffickers rely on "word of mouth" in order to continue their business but he said this does not stop them mistreating the migrants.

"They treat the migrants as commodities and they sometimes threaten people at gunpoint or beat them. Women are often separated from their husbands and children and then sexually abused," he said.

Scenes off delayed Eurostar this evening. They are checking passports *again* after we were already checked in Brussels because there was some mix-up in Lille and UK Border Force are apparently concerned that somebody might have boarded without having had their passport checked. pic.twitter.com/BWQDgfqdUB

Mr. Dowdall said the NCA had 250 active investigations under way and had achieved 140 "disruptions" in the last year.

Notable successes had included the conviction of Josephine Iyamu, who was jailed for 14 years last week for trafficking Nigerian women to Europe to become sex workers.

Natalie Chapman, a spokesperson for the UK's Freight Transport Association, said it was "hugely concerned" gangs were turning to more dangerous methods of smuggling people into the UK and "putting lives at risk".