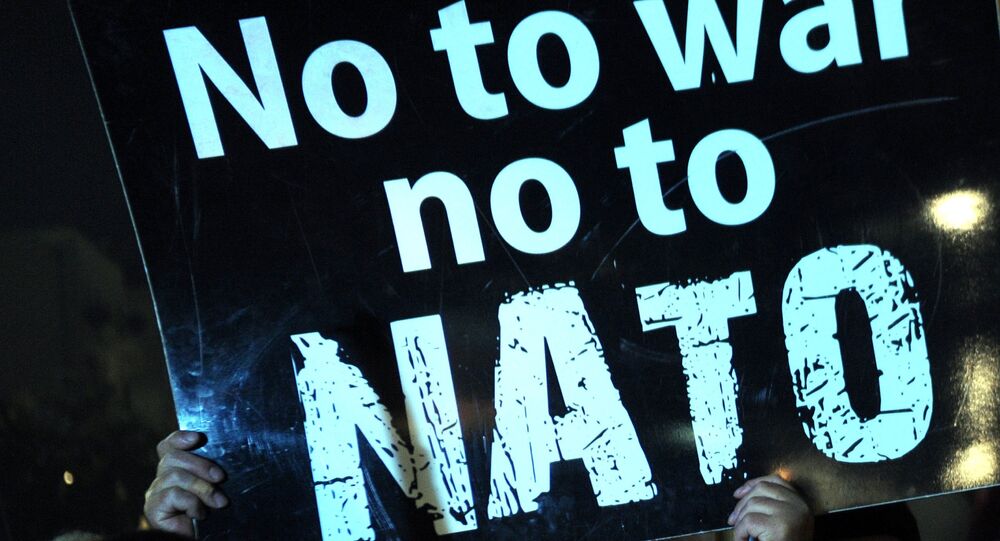 'Anti-NATO' Summit to Convene in Brussels on July 8 - Organizer

MOSCOW (Sputnik) - A counter-NATO summit, which will be held on July 8 in Brussels, Belgium, will convene to campaign against the alliance's militarism, armament and anti-Russia propaganda, one of the organizers of the event in Brussels, Ludo De Brabander, the spokesman for the Belgian Vrede peace movement, told Sputnik on Thursday.

"I'm co-organizer of the two events: a demonstration on July 7th at 3 pm from Brussels North Station and the counter-summit on July 8 from 10 am to 6 pm which is organized by the network 'No to War no to NATO.' The counter-summit will bring critical analyses about militarization, on the pressure on all member states to increase military budgets … The military buildup is sold as a necessity to defend Europe against Russia, although NATO's military budget is 14 times that of Russia," Ludo De Brabander said.

According to the activist, the protesters’ main slogan would be "Make Peace Great Again," which is a parody of US President Donald Trump's famous slogan.

© AP Photo / Mindaugas Kulbis
Not Just About 'Cash:' Germany Fires Back After Trump Slams NATO 'Underspending'
"Anti-Russia propaganda will also be discussed, as well as the nuclear policy of NATO and the refusal of nuclear states to sign the ban treaty on nuclear arms. Other themes are woman and war, drones, military bases," he said, adding that for organizers it was important not only to criticize NATO's policies but also to develop a "strategy of peace" focused on political dialogue, social, environmental and economic security.

"We call it human security and we want our governments to invest more in fighting poverty and climate change instead of in armies. We want to discuss strategies that can strengthen our message and bring it more into the political debate," De Brabander stressed.

The organizers expect to gather at the counter-summit about 170 participants from different states.

"Last year we had more than 200 participants. Due to the timing, it will be less this time, but we hope to have 170 participants from most European NATO countries as well as from the US and Russia and people from outside Europe. Speakers are coming from the US, France, Germany, Russia, Italy, Belgium, Netherlands, UK, Georgia/South Ossetia, Poland, Ireland," he added.

NATO Summit in Belgium will be held on July 11 – 12 in Brussels, Belgium.