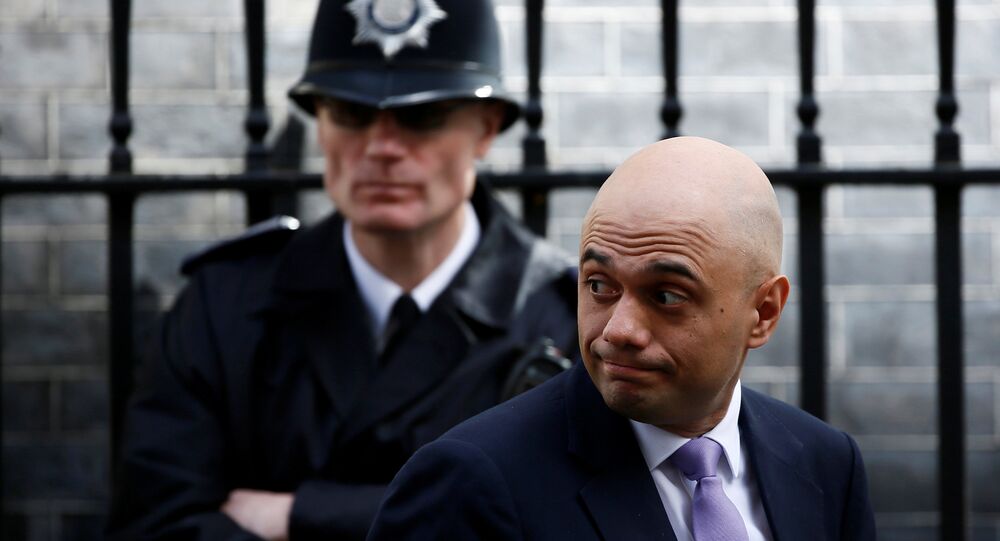 The UK Home Secretary Sajid Javid has addressed the case of two Brits hospitalized in Amesbury after allegedly getting contaminated with the Novichok nerve agent.

Addressing the MPs in the UK Parliament, Mr. Javid said that the nerve agent that struck down a man and a woman into critical condition was the same used on Sergei and Yulia Skripal.

He told the officials that the UK government have taken a very robust approach to decontamination of the affected areas.

"All sites that have been decontaminated following the attempted murders of Sergei and Yulia Skirpal are safe. All sites, which have been re-opened have undergone vigorous testing and any items that may harbored any residual amounts of the agent were safely removed for disposal."

He added there is no evidence that the man or the woman in the hospital visited any of the places that were visited by the Skripals.

© REUTERS / Henry Nicholls
A police officer stands in front of Amesbury Baptist Church, which has been cordoned off after two people were hospitalised and police declared a 'major incident', in Amesbury, Wiltshire, Britain, July 4, 2018

The Home Secretary then reminded the House of Commons that the UK government is holding Russia responsible for the poisoning of the former Russian agent Sergey Skripal and his daughter.

"The use of chemical weapons anywhere is barbaric and inhumane. The decision taken by the Russian government to deploy these in Salisbury on March 4 was reckless and callous. There is no plausible alternative explanation to the events in March other than the Russian state was responsible. And we acted accordingly."

Following the Skripal case, Britain and its allies have accused Moscow of having orchestrated the attack, although no evidence to support the accusations was presented. Russian authorities have strongly rejected the allegations as groundless.

Russian Foreign Ministry spokeswoman Maria Zakharova said in a briefing on Thursday that British police should avoid getting involved in political games.

"We urge British law enforcement not to get involved in dirty political games that certain powers in London have already begun and instead finally cooperate with Russian law enforcement in their investigations," Zakharova said.

In his speech, Mr. Javid also called on Russia to "explain itself" after the Amesbury pair fell ill from exposure to the nerve agent.

"It is now time that the Russian state comes forward and explains exactly what has gone on," Sajid Javid told parliament.

The Secretary said Britain has had no cooperation from the Russian government over this latest poisoning.

Earlier on Thursday, British Security Minister Ben Wallace called on Moscow to "fill in some of the significant gaps that we are trying to pursue" in the Amesbury case.

The Kremlin spokesperson Dmitry Peskov responded saying that Russia had long been ready to help Britain get to the bottom of what really happened to the Skripals but had been ignored.

Peskov also said the Kremlin was worried by the latest news from Britain and hoped the two Britons in a critical condition would recover.

Mr. Javid concluded his address to the Parliament:

"It is completely unacceptable for our people to be either deliberate or accidental targets or for our streets, our parks, our towns to be dumping grounds for poison."

The UK authorities announced on July 4 that two people in Amesbury — later revealed as Dawn Sturgess and Charlie Rowley — were hospitalized after being exposed to an unknown substance and remained in critical condition.

Our statement and current advice on the incident in Amesbury can be found here: https://t.co/wXcMcrr0J0

Amesbury lies seven miles (11 kms) to the north of Salisbury and about the same distance to the Porton Down science and technology laboratory operated by the Ministry of Defense.