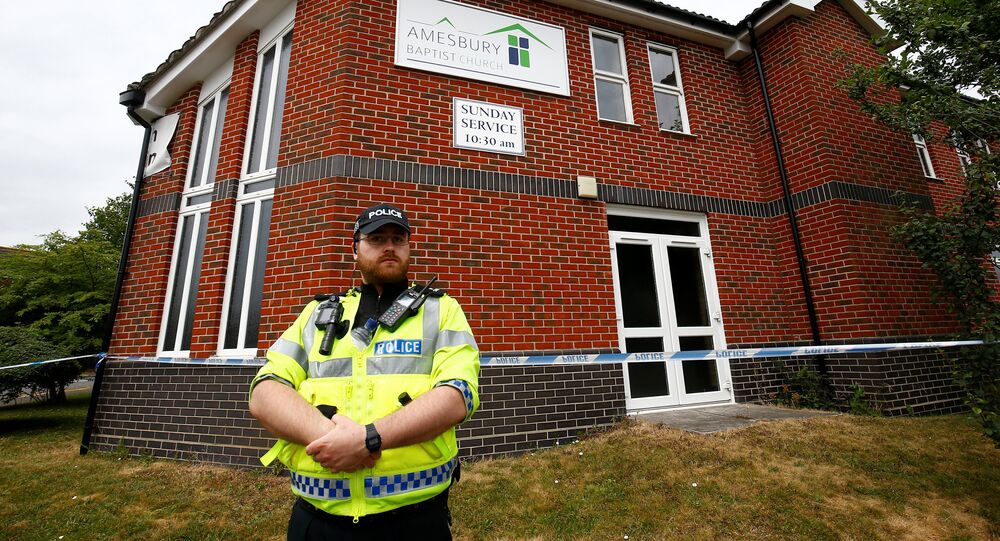 The two people hospitalized in the UK town of Amesbury over the weekend had come into contact with a Novichok nerve agent, but were not targets of an attack, UK Minister of State for Security Ben Wallace said.

Moscow has reacted to the statements by UK officials, saying that the Kremlin has no information regarding the incident or the substances, used in Amesbury, adding that "it is difficult to rely on media."

"This is very disturbing news. Undoubtedly, they cause deep concern since similar incidents have already taken place in the United Kingdom," Kremlin spokesman Dmitry Peskov said.

"The Minister knows very well that Russia has long ago proposed a joint investigation. This proposal is still on the table. It has been made a while ago. Unfortunately, the UK isn't showing any interest in such proposals," Peskov said, commenting on Wallace's remarks.

© AP Photo / Matt Dunham
Cart Before the Horse: UK Media Immediately Blame Russia for Amesbury Incident
London earlier urged Moscow to provide details about the A234 nerve agent, as two people were hospitalized in the UK town of Amesbury over the weekend after supposedly being exposed to the toxic substance.

"These people weren't linked to the Skripals… It wasn't an attack, it was, I think, a contamination by a Novichok," Wallace said on Monday.

UK Security Minister Ben Wallace says he is sure that no matter how long it takes that "we will eventually find out who carried out the Novichok attack."

"The Russian state could put this 'wrong' right, they could tell us what happened, what they did and fill in some of the significant gaps that we are trying to pursue … We have said previously and the prime minister has said [that] they can come to us and tell us what happened. I am waiting for the phone call from the Russian state," Security Minister Ben Wallace told BBC radio.

The minister stressed that this was just one line of inquiry and that the police would be pursuing several others.

A local 44-year-old woman and a 45-year-old man were hospitalized after being found unwell on June 30 in Amesbury, just miles away from Salisbury.

UK authorities alleged that A234 nerve agent had been used to poison Former Russian GRU colonel Sergei Skripal and his daughter, who collapsed in the UK town of Salisbury, not far from Amesbury, in March.

London has blamed the poisoning of the Skripals on the Russian government, while Moscow has strongly refuted all the allegations.