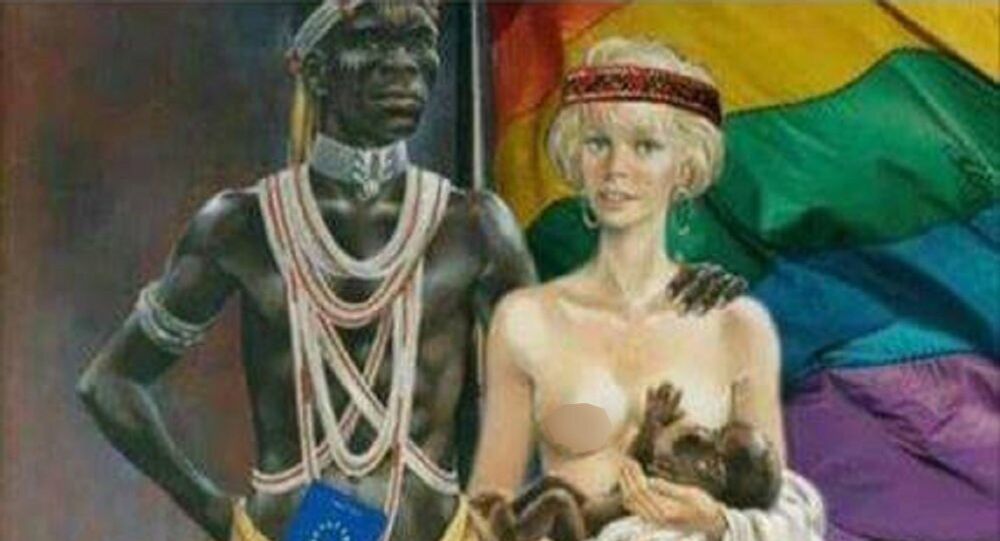 A Latvian political party became the focus of public and media scrutiny after it reportedly attempted to promote its agenda on social media using a controversial and possibly racist image.

The ad, which allegedly portrayed the future of Latvia if the people didn’t vote for the party, featured a black man in a tribal garb with an EU passport tucked into his loincloth, with his right hand resting on the shoulder of a naked white blond woman nursing a black baby; the Latvian and LGBT flags can be seen in the background.

© Photo : Marta Losberga/facebook
Fragment of a now-deleted ad by a Latvian party

The picture is based on a painting called “Modern Family” attributed to an artist known as Herbert Smagon, well-known for his works depicting the alleged suffering of Nazi Germany at the hands of the Allies during WWII.

Many Latvians were shocked by this development, voicing their feelings and concerns on Twitter and wondering how the ad’s authors came up with its concept.

When it seems that Latvian pre-election methods have reached the lowest possible level, you suddenly hear knocking from below

​This GIF shows the stance of other European Social Democrats. In Latvia, it’s quite the opposite!

​One person also inquired whether the picture showed how the LSDSP planned to stop global warming.

​Following the public outrage evoked by this image, the party quickly removed the post and apologized for the incident, claiming that the person responsible for this particular PR stunt was fired.