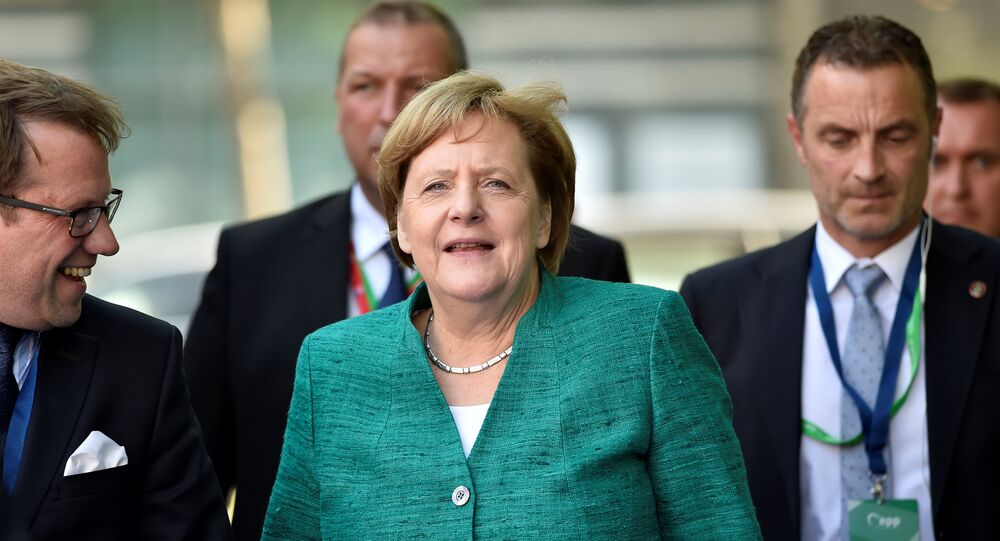 The latest EU summit has reflected the ambiguity existing within the bloc: neither the migration problem nor the Brexit issue has been solved. As for the extension of economic sanctions against Russia, European media outlets have signaled that the upcoming Trump-Putin summit may affect the situation.

The EU summit has not been a breakthrough, throwing the bloc's unity and Berlin's role as the union's flagship into question.

The refugee crisis has yet again come to the attention of European leaders with Italy bringing the issue to a head at the summit that took place in Brussels on June 28-29.

Italian Prime Minister Giuseppe Conte threatened to veto the European Council's decision on migration demanding that concrete measures be taken. After nine-hour talks, a primary consensus was reached, which showed that "blackmail" worked. Ahead of the summit, Rome sent a strong signal to the block by refusing to accept rescue ships with hundreds of migrants aboard.

© Sputnik / Alexey Vitvitsky
Members of EU Parliament Slam Summit on Migration for Lack of ‘Concrete’ Results
Since its onset in 2015, the European refugee crisis has placed a high burden on Italy, whose ports serve entry points for thousands of asylum seekers crossing the Mediterranean Sea. During the summit, the country's prime minister dropped the hint that Rome could initiate "procedures" against EU members who don't respect the migration deal and avoid "fair" burden-sharing.

However, Italy's aspirations were not fully met, prompting The Sunday Times to say that "a deal to cut the flow of migrants from Africa may not be worth the paper it is written on because it has failed to bridge deep divisions across European capitals."

Meanwhile, it seems that German Chancellor Angela Merkel, a longstanding proponent of the open border policy, has realized that she had overshot the mark. Following the summit, Merkel discussed the migration issue with Interior Minister Horst Seehofer, the leader of the Christian Social Union (CSU), admitting later the necessity to reduce the flow of refugees coming to Europe.

© REUTERS / Jonathan Ernst
'Unimpressed': Trump Sends EU Leaders Warning Letters Ahead of NATO Summit
The migration problem has pushed Merkel's career to the edge: Berlin's policy of open borders has come under heavy criticism not only from the government opposition — most notably the right-wing Alternative for Germany (AfD) party — but also from the ruling Christian Democratic Union (CDU) party's longstanding ally, the CSU. Seehofer went even so far as to vow to resign unless she reconsiders her position. The potential breakup between the two politicians could deal a fatal blow to the CDU-CSU coalition government.

Seehofer's tough stance is quite understandable given the upcoming Bavarian state elections: the AfD is hard on the CSU's heels. In late June the right-wing party held a two-day congress in Augsburg calling upon Hungary's Viktor Orban and Austria's Sebastian Kurz to create "Fortress Europe."

It appears that Germany's domestic hurdles and the chancellor's fading popularity gave a confidence boost to the new euroskeptic Italian government at the recent summit, while the European media is claiming that instead of boosting the bloc's unity, "Merkel broke the EU."

Yet another issue brought into the summit's spotlight was the extension of anti-Russian sanctions. On the eve of the meeting, Italian Interior Minister Matteo Salvini signaled Rome's discontent with the sanctions regime, while Conte highlighted, speaking at the parliament, that the renewal of the sanctions should not be "automatic." Although Rome has not vetoed the move, as some had expected, the decision to prolong the restrictions has yet to be formally confirmed.

According to Deutsche Welle, although EU leaders have officially agreed to extend anti-Russia economic measures for six months, the expected meeting between Russian President Vladimir Putin and his American counterpart, Donald Trump, on July 16 in Helsinki "may disrupt a common stance."

Initially introduced in 2014, the sanctions regime is targeting Russia's financial, energy and defense industries. At the same time, it is blocking the access of Russian banks to the bloc's markets.

Meanwhile, the detailed discussion of the Brexit problem was postponed again. Brussels has reportedly reconsidered an October deadline on the final agreement and is seeking to delay it to December 2018. The EU leadership's hesitancy has prompted controversy given the fact that Britain is due to leave the union in March 2019.

The existing ambiguity within the European bloc apparently indicates ongoing changes on the union's political arena, prompted both by the EU's internal problems and economic pressure exerted by Washington on its European allies, ranging from a tariff war, launched by US President Donald Trump, to the US withdrawal from a number of multilateral deals, involving the bloc.