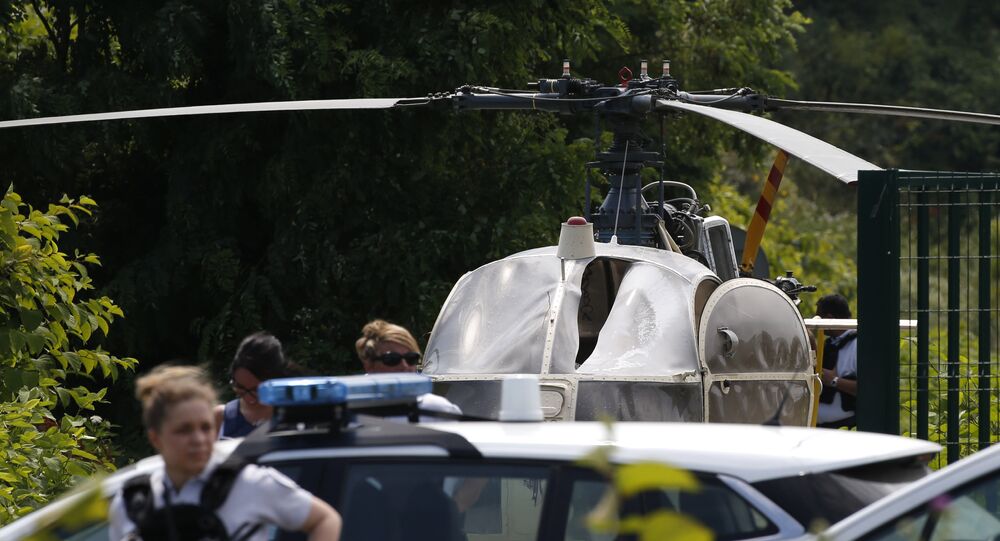 French gangster Redoine Faid is still on the run after a daring escape by helicopter from a prison near Paris on Sunday. Sputnik looks at some infamous and unusual prison breaks from around the world.

Police in France have launched a huge manhunt for Redoine Faid, a 46-year-old bank robber who was "sprung" from Reau prison on Sunday, July 1, by three armed men who hijacked a helicopter and forced the pilot to fly into the jail.

It is the second time Faid has escaped from prison. In 2013 he broke out of Sequedin prison, near Lille, after smuggling in explosives in boxes of tissues. He blew off jail doors and held prison guards as human shields during his escape. He was recaptured six weeks later.

BREAKING: Top French gangster Redoine Faïd escaped a highly secure prison Réau by helicopter, the helicopter was located and on fire on the A1 motorway near Gonesse, near Paris-Charles-de-Gaulle airport.
He fled by car after setting the helicopter on fire. pic.twitter.com/Zpw3f6K8hp

One of Faid's biggest heroes was Jacques Mesrine, a legendary French gangster who ran rings around the police in Paris in the 1960s and 70s.

Mesrine, a master of disguise, escaped from custody four times and probably the most daring of those was in 1972 when he and a Quebec nationalist friend broke out of a high-security prison in Canada, where he had fled when the heat from the police became too much in France.

A few weeks later he tried to spring several friends from the same jail but succeeded only in seriously wounding two policemen. A week later he killed two forest rangers when they spotted his hiding place.

Update: To escape, Redoine Faid and his accomplices kidnapped a helicopter pilot who had been waiting for a flight student https://t.co/YnsN218AeA @AFP

By March 1973 he was back in France. He escaped from a courthouse in Compiègne, using a gun which had been hidden in the toilet.

But he was recaptured and spent five years in the tough and supposedly escape-proof Sante prison in Paris.

In May 1978 he escaped with a friend and stayed on the lam until November 1979 Mesrine when he was mercilessly gunned down during a police ambush in the center of Paris.

His girlfriend, Sylvia Jeanjacquot, lost an eye. Mesrine's bullet-ridden car was found to contain a Browning pistol and two grenades.

In 2008 Vincent Cassel played the eponymous gangster in the critically-acclaimed movie Mesrine.

Escape from the Maze

In the early 1980s "The Troubles" in Northern Ireland were at their height and hundreds of Irish republican and Ulster loyalist prisoners were kept at the Maze prison just outside Belfast, which was always referred to by the IRA and Sinn Fein as Long Kesh.

Several IRA prisoners, including Bobby Sands, died on hunger strike at the Maze in 1981 in a failed attempt to secure rights as "political prisoners".

On September 25, 1983 a group of 37 IRA prisoners staged an escape which mortified Margaret Thatcher's Conservative government.

Around 2.30pm the group overpowered the guards and took over one of the H-shaped prison blocks armed with a craft knife and a smuggled gun.

They then hijacked a truck bringing food supplies into the prison.

"This man is doing 30 years and he will shoot you without hesitation if he has to. He has nothing to lose," the truck driver was told by one of the gang.

Dear @Netflix when will the #RedoineFaid docudrama, series or movie be coming out. #francemostwanted #mostwanted

The IRA men hid in the back of the truck and had almost got out of the gate when the alarm was raised. Scuffles ensued and 20 prison officers were kicked, stabbed or shot, one of whom died.

Fifteen of the escapees were recaptured on the same day but any of those who got away rejoined the IRA and were responsible for gun and bomb attacks in Northern Ireland and on the British mainland.

Legend has it that nobody successfully escaped from the Alcatraz Federal Penitentiary, a maximum high-security federal prison on Alcatraz Island, 1.25 miles off the coast of San Francisco, which operated from 1934 to 1963.

In the beginning it was a defensive fort; after that it was transformed into a military prison and then turned into a prison for especially dangerous criminals.

The prison was located on an island in the middle of the bay surrounded by strong sea currents, which provided it with natural isolation.

Fourteen escape attempts were made in the 29 years of its existence.

Seven prisoners were shot and two drowned at sea while no trace has been found of the other five.

In June 1962 Frank Morris — later played by Clint Eastwood in the film Escape From Alcatraz — Allen West and brothers John and Clarence Anglin got out of the prison and fooled guards by using dummy heads to make it look as if they were asleep.

The quartet are believed to have used a raft to cross the bay but their families never heard from them again and only a handful of people believe they survived the crossing.

Redoine Faid's audacious escape is not the first time criminals have tried to escape using a helicopter.

In December 1987 John Kendall and Sydney Draper, who were both considered highly dangerous, escaped from Gartree, a Category A high security prison in Leicestershie.

In mid-air he pulled out a gun and told the pilot, Ian Evans, to fly into the prison yard and collect the two inmates.

The helicopter landed in an industrial estate and Evans was handcuffed to the joystick while the trio made their escape.

The prisoners ended up in Sheffield, where they laid low as a huge manhunt swung into place.

Draper remained at large for another 13 months before he too was caught.

Joaquin Guzman, better known as El Chapo, is the head of Mexico's notorious Sinaloa Cartel and keeping him in prison proved almost impossible for that country's authorities.

In July 2015 he escaped from a high security prison by using a tunnel under the shower unit in his cell.

He was last seen by security cameras at 8.52pm when he got into the shower. When he had not emerged from the shower 25 minutes later guards went to check on him and found he had escaped down a mile-long tunnel dug under the floor.

El Chapo, who had also escaped in 2001 with the connivance of dozens of bribed prison guards, was finally recaptured in January 2016 and has since been extradited to the United States.

When six inmates, including five IRA prisoners, escaped from a special secure unit at Whitemoor prison in Cambridgeshire in September 1994 it was a huge blow to the Conservative  government of John Major.

Two guns were used in the escape and a kilogram of Semtex explosives was found in the grounds.

A report by Sir John Woodcock, the chief inspector of constabulary, later concluded the breakout was "a disaster waiting to happen" and criticised poor management at every level of the prison service.

The Home Secretary, Michael Howard, refused to resign and blamed the head of the prison service, Derek Lewis.

The escapees were all arrested within minutes and two of them were later awarded damages for injuries they claimed they received from prison officers after they were recaptured.

They used considerable violence to overpower guards and then stole a prison maintenance truck to get to nearby San Antonio, where the split up.

Four of the gang tried to rob a gun shop in Irving on Christmas Eve and shot dead police officer Aubrey Hawkins when he tried to intervene.

They were recaptured in January 2001 and the other three were found in Colorado a few days later.

In February 2012 the mastermind of the Texas Seven, George Rivas, was executed by lethal injection.

In the Second World War Australia fought alongside Britain, the United States and the Soviet Union against Germany and Japan.

Under the Japanese warrior code, bushido, to be captured was humiliating in the extreme and all prisoners of war were duty-bound to try to escape.

The camp was in the middle of the outback and the breakout was never likely to be escape — 231 Japanese prisoners died, many as a result of suicide when faced with recapture, and 108 were wounded.

A Military Court of Inquiry investigated the incident and when Prime Minister John Curtin read out in Parliament he said the breakout was characterized by "a suicidal disregard of life".

Prison-Break Impossible: Most Famous Penitentiaries Around the World