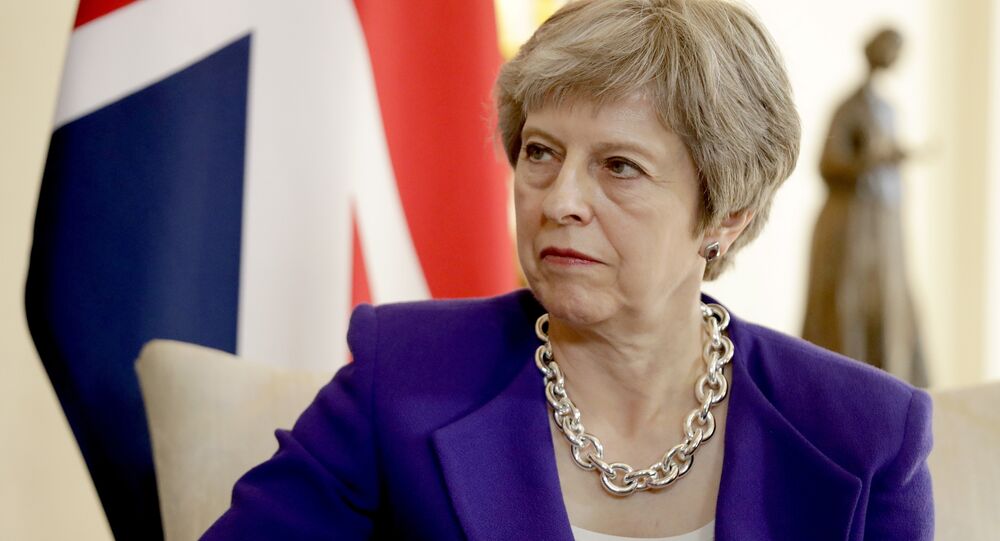 UK Prime Minister Theresa May will urge the participants of a two-day EU summit to pursue a hard line against Russia, the Press Association reported, citing government sources. And while her European counterparts struggle to find a solution to the pressing migration issue, the UK PM will seek to reassure them that Brexit goes as planned.

According to the media outlet, Theresa May will address European leaders at the summit in Brussels in an effort to push for the extension of anti-Russian sanctions. The prime minister will also reportedly highlight the importance of taking further action, including tackling alleged Russian propaganda and disinformation.

"Russia and other actors seem to be trying to sow disunity, destabilize our democracies and test our resolve. We must adapt our current defenses to the new normal and take responsibility for protecting international norms and institutions,” May will reportedly say.

Earlier in June, May warned that she would put enhanced sanctions against Moscow high on the agenda at the EU summit following the alleged poisoning attack on former Russian intelligence agent Sergei Skripal and his daughter Yulia in Salisbury in March.

In light of the purported incident, relations between Moscow and London have drastically deteriorated, with Theresa May immediately accusing Russia of being behind the alleged attack without providing any evidence to substantiate the claims.

© AP Photo / Frank Augstein
'This Must Be a Joke!' Twitter Loses It Over UK Government's Latest Blunder in Skripal Saga
While Moscow has consistently denied any involvement in the incident, the UK nonetheless introduced a batch of diplomatic sanctions against Russia, followed by a massive expulsion of over 100 Russian diplomats from the UK, the US, and other European nations. Moscow, for its part, took symmetric measures against the sanctioning states.

The prime minister is set to brief her European counterparts on the progress of Brexit negotiations after the EU Withdrawal Bill, also known as the Brexit Bill, had earlier received the Royal Assent, giving it the status of law. The EU leaders, in turn, are expected to exert more pressure on May and warn her about the mounting risk of a no deal Brexit to make a clear choice about the future of UK-EU ties.

May travels to Brussels following a week of cabinet splits over the UK’s divorce from the EU: on the one hand, there are pro-EU MPs and concerned businesses willing to preserve close economic ties with the bloc. On the other hand, there are hardline Brexiteers within her own party, who continue to call for the UK’s clean break from the union’s single market and customs union, and have called on the PM not to “betray Brexit.”

According to a top government insider, cited by a number of British media, May will seek to reaffirm the UK's commitment to its EU partners even after Brexit occurs.

“The PM will re-emphasize the UK’s commitment to working with the EU to address the common challenge posed by illegal migration now and after the UK leaves the EU,” the source said.

The summit comes shortly after a number of European businesses, including the German-based carmaker, BMW, and the French aviation giant, Airbus, warned they would start preparing “contingency plans” and reconsider their position in the UK if they weren’t provided with details of Britain’s post-Brexit trade arrangements with the EU.

© REUTERS / Peter Nicholls
Brexit Divorce Could Cost Over £10 Billion More Than Estimated – MP Committee
Britain voted to withdraw from the EU in a June 2016 referendum, with talks between Brussels and London having officially started in 2017.

The UK's divorce from the European Union is scheduled for March 29, 2019. A transition period, which will see the UK maintain its presence in the single market and customs union, is set to last until the end of 2020.

Discussion of Brexit is expected to be overshadowed by the migration issue across the Mediterranean. According to a UK government source, the prime minister will insist on taking an “effective long-term approach,” which should be “comprehensive” and “tackle the problem at its root.”

"We have a long-term commitment to dealing with the migration problems that are facing Europe. We have provided resources for a number of years and continue to do so because it's in all our interests to deal with this problem at source,” the insider said.

This follows the UK government's announcement earlier this week that an extra British Border Force cutter vessel was being deployed to the Mediterranean to provide assistance with search and rescue operations.

© Sputnik / Iliya Pitalev
Albania Refuses to Host EU Migrant Reception Centers - Prime Minister
The debates over handling and addressing illegal immigration in Europe intensified after Italy and Malta denied entry to the Aquarius vessel, stranded in international waters with hundreds of migrants onboard earlier in June. Even though the ship was eventually accepted by Spain, the incident prompted discussions over the search for an EU-wide approach to the problem.

Mediterranean nations, including Italy, have been calling to renegotiate the refugee quotas and revising the so-called Dublin Rule, which requires that would-be refugees file for asylum in the first EU member-state they arrive in.