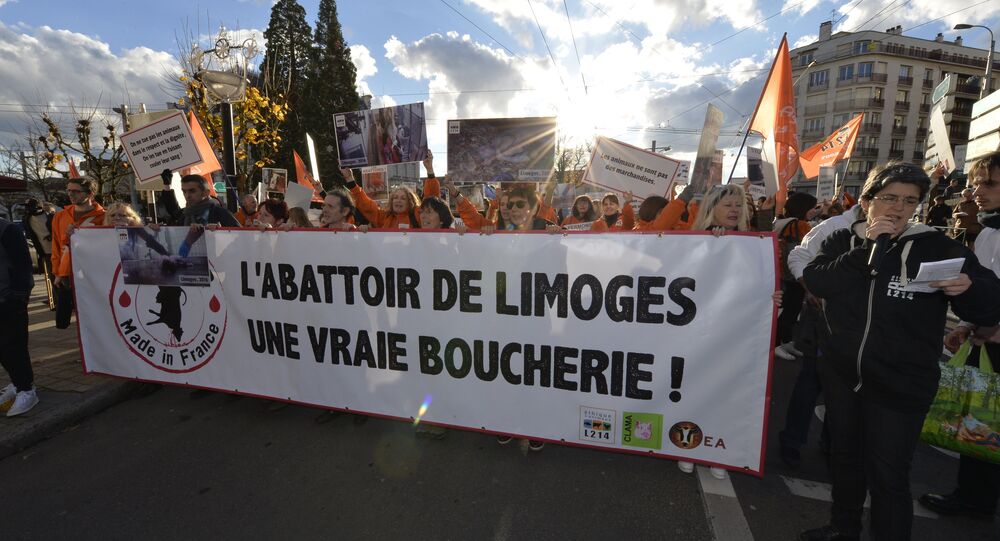 In a new round of the meat debate in a country proud of its boeuf bourguignon and foie gras, lobby-searching butchers seem to have the last word, at least for now.

French butchers have formally requested police protection against vegans, whom they blame for a series of attacks designed to "spread terror" in the meat-loving nation, according to a document seen by AFP and cited by The Local.  Butchers claimed that animal rights groups and vegans in particular attack them "physically, verbally and morally"; they notably blame universal media exposure on the anti-meat cause for triggering bellicose sentiment against their occupation.

In an open letter to Gérard Collomb, the interior minister, President of the French Federation of Butchers and Caterers Jean-François Guihard stated:

"We are counting on your services and on the support of the entire government to stop as swiftly possible 'such attacks.'"

He went on to point to the fact that the 18,000 butchers of France were "worried" and "shocked" as just a minute part of society is trying to impose "its way of life and ideology" on the predominantly meat-eating French.

Twitter seems to be divided into two opposing camps over the matter, with many pointing to clear-cut lobbyism, notably in both directions:

"Veganism making an impact on the meat industry- this has nothing to do with culture & everything to do with the environment, health, humanity, & unnecessary slaughter of sentient beings," one user remarked, while another one stated that the butchers’ main scare is not veganism as such, but the increasing amount of people ditching meat for health and other concerns:

Seriously? Sounds like a moral panic whipped up by a meat industry losing its market share as increasingly more people eschew meat due to animal welfare, environmental & health concerns… https://t.co/XEufw63BVF

"It is not the 5% of vegetarians in France that scare the industry, it’s the 50% of people who are willing to reduce their consumption of meat that make them panic". https://t.co/bkEAdAWf3J

Veganism making an impact on the meat industry- this has nothing to do with culture & everything to do with the environment, health, humanity, & unnecessary slaughter of sentient beings. France: Butchers demand protection from vegans #GoVegan #veganism https://t.co/HsZ2NXqqsi

One user even humorously suggested that France should make a culture of something, other than renowned food specialties, while another one suggested that butchers should in their turn attack vegans by "smearing them with meat:"

"It is not only purveyors of meat who [are victims of vandalism]: last year a cheesemonger in Lyon said his shop was painted with the words 'milk is rape' and 'milk is murder'."

Never, ever condone violence of any kind. But, France (and #Manu), if meat is the best you have, get a better culture. https://t.co/Xn48wXPa3x

Others indulged in speculations over mutual accusations of "terrorism:"

“#terrorism? Lol I didnt realize #butchers are such delicate little flowers lol. Don’t worry dummies, humans will still be eating meat long after you are dead,” a Twitter user remarked tongue-in-cheek, pointing at the fact that humans are meat-eaters at large.

The butchers’ statement comes on the heels of a vandal attack on a rotisserie in Lille, northern France, featuring smashed windows and "no to speciesism" inscriptions on the shopfront.  The latter has been a slogan frequently used by animal welfare campaigners in recent years, which suggests that the mistreatment of non-humans is equal to discrimination in a racist or sexist form. The May incidents, which even prompted Mayor of Lille Martine Aubry to threaten the activists with legal action, are only the most recent in a spate of similar assaults.

In April, in Hauts-de-France, also in the country’s north, seven butchers were reported to have come under attack, being sprayed with fake blood. Addressing the government in their plea, the butchers also cited several attacks of the same nature in the southwestern Occitanie region. Separately, the butchers’ association emphasized another incident in late March, when an anti-meat campaigner lauded the murder of a butcher in a supermarket Trèbes, near Carcassonne by an Islamist terrorist, questioning why "it shocks people if a murderer gets killed by a terrorist."

The French butchers have recently come into the spotlight in the wake of much-debated revelations centering around abattoirs and battery farms as the animal welfare group L214 drew the public’s attention to the largely inhumane conditions in which animals live before being violently killed.

The anti-meat row is apparently not new to Europe: two months ago, the UK’s Countryside Alliance warned against a surge in attacks on small businesses and "death threats" by vegan campaigners. In a separate move, in late April, the French parliament ruled it illegal for vegetarian food producers to use meat-related expressions, such as "steak", "merguez", "bacon", "sausage" or "bacon-like" to describe food that is not made of or from real meat.