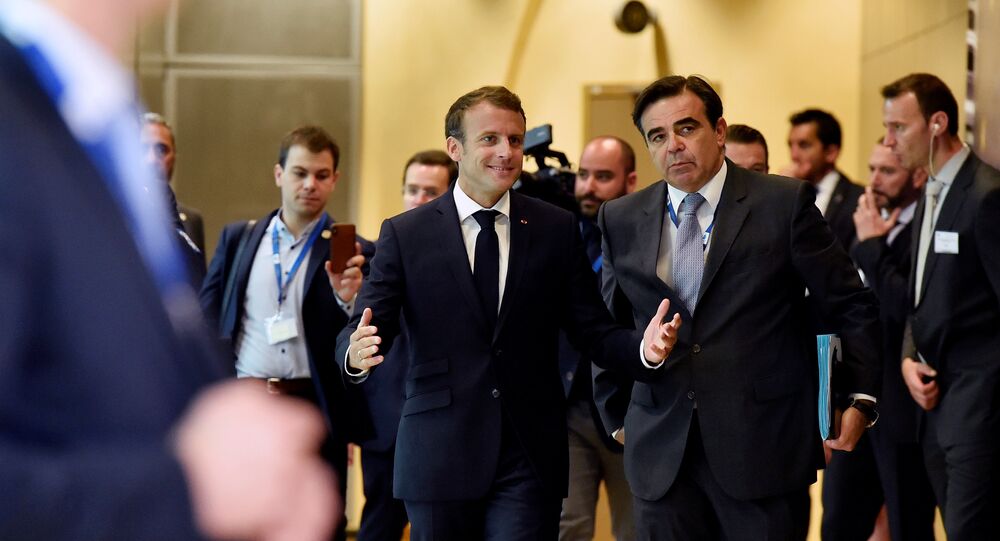 About 16 EU countries took part in Sunday's informal "mini-summit" on migration in Brussels, which was chaired by European Commission President Jean-Claude Juncker.

According to the document, summarizing the results of the meeting, Italy said that those who do not welcome refugees should see a reduction in EU funds. Rome stressed that the EU's Schengen free travel zone is at stake when dealing with the migrant row.

Speaking ahead of the summit, French President Emmanuel Macron acknowledged that the European Union was facing a "political crisis" over migration.

"We need clear ideas for resolving it, we have values in the EU, and every time we betray them, we do the worst. Those values are respect for human rights, respect for other states, and solidarity that holds us together," he added.

© AP Photo / Michael Kappeler
'This Means End of Europe': Merkel's Union Partner Accused of 'German Brexit' Plot
Macron added that the decision that plans to develop in the European Union must be built upon the cooperation of countries, which requires responsibility and solidarity in order to share the burden that some states experience.

"France does not need any lessons in this regard, we are second in terms of the number of refugees accepted this year," he stressed.

'Not Summit About Whether Merkel Will Remain a Chancellor'

In her turn, German Chancellor Angela Merkel stated that large part of discussions would be external borders and reducing illegal migration into the EU. She also stressed that there cannot be a solution on migration at summit on Thursday, but multilateral agreements are needed.

"On the one hand, we are talking about primary migration, that is, about refugees coming through the EU's external borders. Therefore, one big topic is the protection of external borders and the reduction of illegal migration to Europe. Secondly, we will talk about issues of so-called secondary migration, how we will fairly and honestly manage it with each other within EU borders, in the Schengen zone, how we can achieve a reasonable distribution here," the chancellor concluded.

Referring to the strained political situation in Germany caused by an immigration row, Luxembourg Prime Minister Xavier Bettel noted that this summit is not about whether Merkel will remain a chancellor but rather about solving European problems.

Italian Prime Minister Giuseppe Conte has reiterated his intention to present a completely new proposal on migration at the upcoming summit.

In its turn, Spain fulfills its obligations to the European Union in the issue of migration and is ready for a constructive dialogue, but also expects a united Europe to respond in a similar manner, the country's Prime Minister Pedro Sanchez said on Sunday.

Sanchez recalled the joint Spanish-French proposal voiced on Saturday by French President Emmanuel Macron about the establishment of "controlled centers" in Europe to place migrants after their arrival by sea.

"We are also talking about respect for the rights of migrants who come to the European shore, but primarily about a controlled, responsible policy," Sanchez added.

According to Prime Minister of Belgium Charles Michel, EU countries must ensure strict and real control at the bloc's external borders in order to save the freedom of movement within the framework of the Schengen area.

"We have several priorities: first, if we want to maintain free movement within the Schengen zone, we must monitor the real and strict control at the external borders," he told reporters before the start of the meeting on migration in Brussels.

The second priority is to look at the essence of the issue and to define the parameters of the points of reception of migrants to ensure their compliance with legal norms, the prime minister added. He expressed hope that the talks would be "useful."

© REUTERS / Eric Vidal
EU Turns Into Scattered Archipelago Amid Failure to Find Common Migration Solutions - Rome
The European Union has shifted its focus from attempting to relocate asylum seekers across the bloc to seeking to establish close cooperation with the countries of their origin, including those in Africa, to contain the inflow of migrants, Danish Prime Minister Lars Lokke Rasmussen added.

Back in May 2016, the European Commission adopted a package of proposals to amend the Dublin Regulation, which allows for migrants to be sent back to the country where they first entered the continent, and introduce a fairer migrant resettlement system, however, the union lacks unity on the issue.

In a statement on Saturday, Italy's Interior Minister and Deputy Prime Minister Matteo Salvini recalled that in the past four years, Italy has faced 650,000 arrivals by sea, with 430,000 asylum requests.

He added that the country currently hosts 170,000 "alleged refugees" at an overall annual cost of 5 billion euros (5.8 billion dollars).

"If for the arrogant President Macron this is not a problem, we invite him to stop insulting and show instead some concrete generosity by opening up France's many ports and letting children, men and women through at Ventimiglia," Salvini said, referring to an Italian town on the French border.

He was echoed by Italian Deputy Prime Minister Luigi Di Maio, who wrote on his Facebook page that "Italy indeed faces a migration emergency and it's partly because France keeps pushing people back at the border."

"Macron risks making his country Italy's No.1 enemy in this emergency situation," Di Maio pointed out.

Their remarks came after French President Emmanuel Macron claimed that "Europe is not experiencing a migration crisis of the same magnitude as the one it experienced in 2015."

"A country like Italy has not at all the same migratory pressure as last year. […] The crisis we are experiencing today in Europe is a political crisis," he added.

Later on Sunday, European Commission President Jean-Claude Juncker will chair the EU's "mini-summit" on asylum and migration in Brussels, an event that will come ahead of next week's European Council summit.

Earlier, Hungarian Prime Minister Viktor Orban announced that the so-called Visegrad Group (V4), which includes Hungary, Poland, the Czech Republic and Slovakia, would boycott Sunday's summit which the V4 insists should be organized by the European Council, not the European Commission.

READ MORE: ‘Migrants Spent Thousands and Thousands of Dollars to Get to Europe' — Analyst

According to Orban, the Visegrad Group favors the idea of screening centers outside the EU where asylum-seekers could present their requests for protection.

Hungary has repeatedly called for the creation of such centers in Africa, with the new Italian government signaling its support for the idea.

EU Migration Commissioner Dimitris Avramopoulos rejected the proposal, describing it as a "Guantanamo Bay for migrants" which he said comes "against our European values."

EU Countries at Odds Over Migration

The EU is still facing major political divisions over the response of member countries to the mass influx of immigrants and refugees which began in 2015.

The EU's Eastern European members are refusing to accept migrants on a mass scale and balking at the idea of refugee quotas.

In Germany, Chancellor Angela Merkel has been criticized by Interior Minister Horst Seehofer, the head of Bavaria's Christian Social Union (CSU), who gave her until July 1 to negotiate individual agreements with Germany's immediate neighbors to allow Berlin to turn back refugees who have already been registered in another EU country.

Austrian Chancellor Sebastian Kurz, for his part, said that Vienna, Berlin and Rome plan to jointly grapple with the problem of illegal migration, referring to the fact that migrants often arrived in Austria through Italy and, if unwilling to settle there, then went on to Germany.

© AFP 2021 / PIUS UTOMI EKPEI
Fear of Dark Magic Forces Nigerian Migrants in Europe Into Prostitution - Report
Italian Prime Minister Giuseppe Conte in turn announced that his country is unable to take all the refugees in and refused to address the issue of migrants' secondary movements until the pressure on Italy, as the country most exposed to migrant arrivals, was resolved.

Earlier, Italy's new government was engaged in a row with France after turning back the Aquarius migrant boat, prompting harsh criticism from Paris, as well as several human rights organizations.  After Conte's meeting with Macron, the parties announced that the dispute was over and that they will try to find  a new way to deal with the issue.