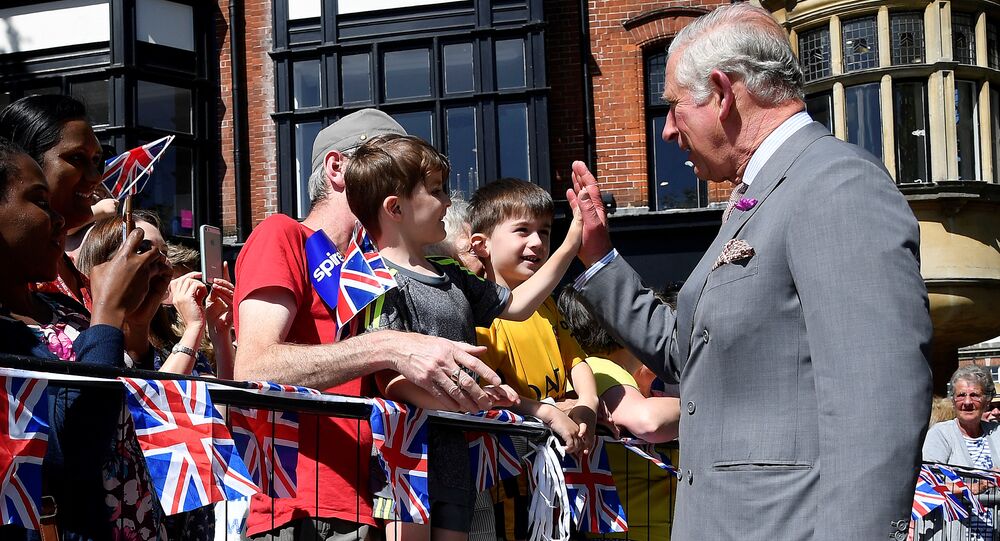 The town of Salisbury made headlines in March as its image was marred by a purported poisoning attack on former Russian intelligence agent Sergei Skripal and his daughter Yulia. Despite the fact the pair is said to be recovering, businesses in the city have been affected by the incident.

Prince Charles and the Duchess of Cornwall began their visit to Salisbury by meeting workers at shops next to the spot where the Skripals were found collapsed and continued past the Zizzi restaurant where the attacked pair ate, into the Guildhall Square, where they were greeted by a cheering crowd waving Union Jack flags.

"We are absolutely delighted to welcome the Prince of Wales and the Duchess of Cornwall to Salisbury in support of its recovery and to help boost visitors to the center. Whilst the recovery work is well under way, there is still a lot to be done and this visit is a real boost for the city,” Alistair Cunningham, chairman of the recovery coordinating group, said.

The Royal couple came to the city to show support and boost tourism and trade in the city as Salisbury is still recovering from the impact of March’s alleged poison attack on the Skripal family.

An enthusiastic welcome for Charles and Camilla in Salisbury, where business has been badly hit by the Novichok poisoning attack in March on former GRU officer Sergei Skripal and his daughter Yulia. pic.twitter.com/Ga5wQguwvK

Charles and Camilla greeted by big crowd in Salisbury pic.twitter.com/iYYLMK0BZH

Half an hour ago there was virtually nobody but there must be 1,000 people here to see Prince Charles and Camilla visit Salisbury to help boost trade hit by the poisoning of a former Russian spy and his daughter. pic.twitter.com/swpK7wTLrm

I reckon there are a couple of thousand here now. pic.twitter.com/2mAaJdAoCT

Prince Charles and Camilla visit Salisbury where business has been badly affected by the poisoning of the #skripals in March pic.twitter.com/GcjVwDlVLv

Charles and Camilla are visiting Salisbury today. Great show of support as the city still is feeling pain emotionally, economically and some physically after the the Skripals poisoning attack. 📷 @chrisshipitv pic.twitter.com/6k0h5sg6i7

Social media users have been sharing their emotions and pictures of the encounter with the Royal couple:

Such a fun morning welcoming Charles and Camilla to Salisbury today. Lucky to get front of the barrier but just missed a chat 😂 #lovetheRoyals #wavedmyflag pic.twitter.com/iDcv6FphSM

Wonderful that Charles&Camilla went to Salisbury today to show their support & help put the Salisbury businesses back on track!! That´s "Royal work" at its best!! And I can´t help it, but Charles looks SO HAPPY at the moment — he´s literally beaming all the time!!! https://t.co/09IuLFciDI

Welcome to Salisbury: Charles and Camilla given a warm reception by the crowds. Glorious weather for the visit, showing support for the city’s businesses, which have suffered since March’s nerve agent attack. https://t.co/NusGmWweOa

Salisbury is open for business. The message from Charles and Camilla who visit the city — still suffering from a lack of visitors after the #skripals poisoning
More: https://t.co/RaqmQBqoUb pic.twitter.com/UWyEcDA1Yn

The pair is said to have had a scheduled meeting with Detective Sergeant Nick Bailey who had also suffered from the effects of the nerve agent, allegedly used against the Skripals.

In the wake of the alleged poisoning, medics claimed that Yulia and Sergei were in critical condition after being exposed to a military-grade nerve agent Novichok and might never recover.

© Sputnik / Alex McNaughton
Russian Embassy in UK Calls Stoltenberg's Remarks on Skripal Case 'Disinformation'
After spending a month in the hospital, the agent’s daughter woke up and regained the ability to speak; days later the Salisbury hospital announced that her father was no longer in critical condition and was recovering despite the initial claims.

As the two were found unconscious in a Salisbury mall, the British authorities rushed to accuse Russia of “attempted murder,” ordering a massive expulsion of Russian diplomats from the country, thus prompting a wave of coordinated ousters of Russian diplomatic workers across western nations. Moscow, for its part, has denied any involvement in the incident, and took symmetric measures in response to the West’s actions.