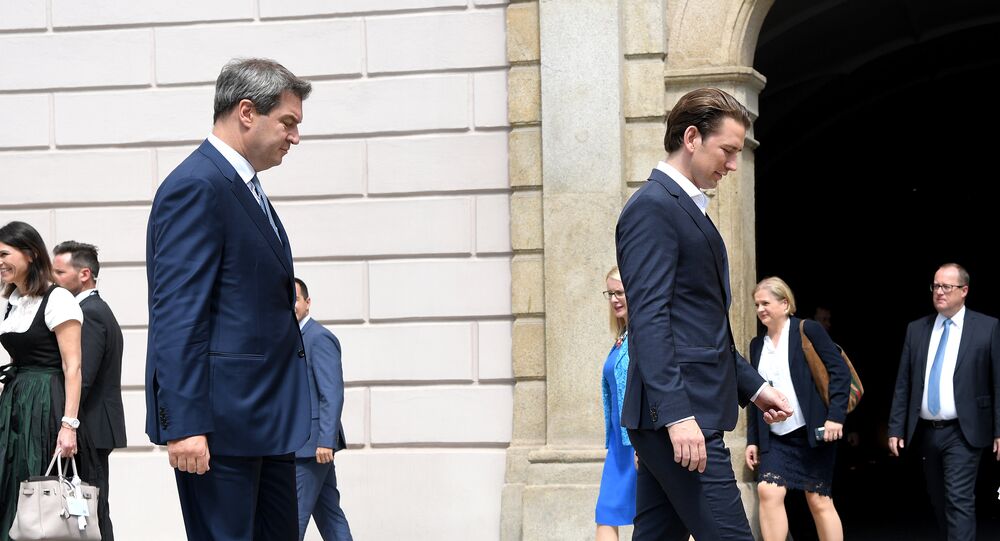 Austrian Chancellor Sebastian Kurz has met with Bavaria’s Premier Markus Söder to address the issue of immigration amid an impasse in Germany between Angela Merkel and the Bavarian Christian Social Union over asylum policy.

Either Return to National Borders or Defend EU's Joint Border

Speaking at a press conference, both Söder and Kurz emphasized how important it was to close the European Union’s “external border,” with the Bavarian premier calling for a “turning point in our migration policy.”

Söder, in turn, elaborated that if the external border wasn’t closed, it would become “a problem for democracy” in Europe.

Without going into details, the Bavarian premier approved of Kurz’s idea to create military “secure zones” for refugees in North Africa. He suggested investing more in the potential project to deter refugees from leaving for Europe.

© REUTERS / Fabrizio Bensch
Merkel, Kurz Clash Over Refugees During First Meeting in Berlin
Söder, a member of Bavaria’s Christian Social Union, seemed to have found support in Kurz, whose People’s Party is in a coalition government with the right-wing Austrian Freedom Party, as the two have made clamping down on immigration a priority.

The Austrian chancellor favored the idea of countries having more freedom to determine their own resettlement programs, as well as a continental solution to the immigration issue. According to him, the situation could spiral out of control and lead to a “catastrophe” similar to the 2015 migration crisis if the bloc doesn’t endorse a joint response.

The meeting between the two hardliners came amid a growing rift between German Chancellor Angela Merkel and her Bavarian sister party, CSU, over immigration policy.

On Wednesday, Söder slammed Merkel’s Eurozone budget deal with French President Emmanuel Macron over asylum policy, warning her against “mixing” the two courses, before suggesting that the German chancellor was buying a solution to the standoff.

"We can't now start introducing additional shadow budgets or try to soften the stability of the currency. Or even try to achieve some solutions with German payments,” he said.

Interior Minister and head of the CSU, Horst Seehofer, has given Merkel two weeks to find an appropriate solution to the issue at the EU level before he orders border police to start sending back asylum seekers.

"Axis of the Willing"

The Austrian chancellor, whose anti-immigration agenda led him to a win in the elections, has been pushing to shift Europe’s attention away from the settlement of refugees across the bloc to the enhanced defense of its external border.

Earlier this week, Kurz proposed forming a so-called “axis of the willing” with Germany and Italy in hopes that it would tighten border security and stem the flow of illegal migrants from the Middle East and North Africa.