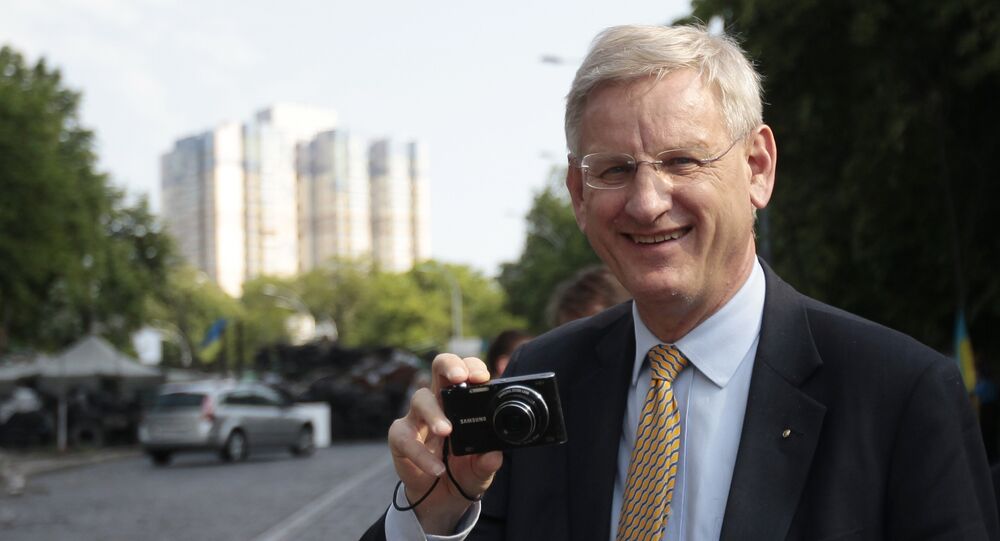 With a series of tweets, US President Donald Trump has launched a verbal attack against Europe, slamming the generous European immigration policy as disastrous. This provoked a sharp reply from former Swedish Prime Minister Carl Bildt.

US President Donald Trump has come under fire from former Swedish Prime Minister Carl Bildt, who ventured that the US leader was "far worse" for destabilizing Europe than Vladimir Putin himself, a perennial target for the Swedish political establishment.

In his tweet, Trump argued that migration was "rocking" the "already tenuous Berlin coalition." He also suggested that crime in Germany was on its way up and that "allowing in millions of people who have strongly and violently changed Europe's culture" was a mistake.

​To this, Carl Bildt, a staunch supporter of the EU, tweeted that the German crime rate had actually hit the lowest point in decades and was still falling "despite all the attempts by Trump and others to claim the opposite."

​Furthermore, Bildt tweeted that when it came to the destabilization of the EU, Trump was "far worse" than Vladimir Putin, the politician arguably most often cited as a danger by Swedish media and politicians.

Is Putin interfering trying destabilize the politics of the EU? Yes. But Trump is at the moment far worse. This is unheard of. https://t.co/9k0PtMoxlP

​Incidentally, a Swedish user wrote to the US president that Bildt was "in no way speaking for us Swedish folks," calling him a "washed up part of the Swedish swamp."

Dear @realDonaldTrump, this individual is a washed up part of the Swedish Swamp. He is in no way speaking for us Swedish folks.

​In recent months, Bildt has launched a series of attacks against the US leader, questioning his foreign policy.

"When you see Canada being treated as an enemy and North Korea as a friend, it's nothing you have imagined before," Bildt told Finnish national broadcaster Yle during security talks held at the Finnish president's residence Kultaranta, stressing that the Trump-led US had generated "a lot of uncertainty."

Bildt also conceded that Europe cannot become "completely independent from the US," but suggested a broader cooperation between European states in matters such as defense and security.

Earlier, Bildt ventured that Trump's pullout of the Iran deal was an attack against Europe.

Trump’s decision to blow up the Iran deal is a massive attack on Europe. Me for @washingtonpost. https://t.co/pzkFPGFSEv

Trump delivers hard exit from the Iran nuclear deal, puts US on the path to conflict in the region and confrontation with its European allies. This is a pivotal moment in many respects. EU must stand steadfast.

​​Bildt served as Sweden's PM from 1991 to 1994 and Foreign Minister from 2006 to 2014. He also led the Conservative Party from 1986 and 1999. Internationally, he is remembered for his efforts as mediator during the Balkan wars as well as being one of the architects of the EU's policy in the East, particularly Ukraine. In 2015, Bildt was appointed to Ukraine's International Advisory Council on Reforms under President Petro Poroshenko.