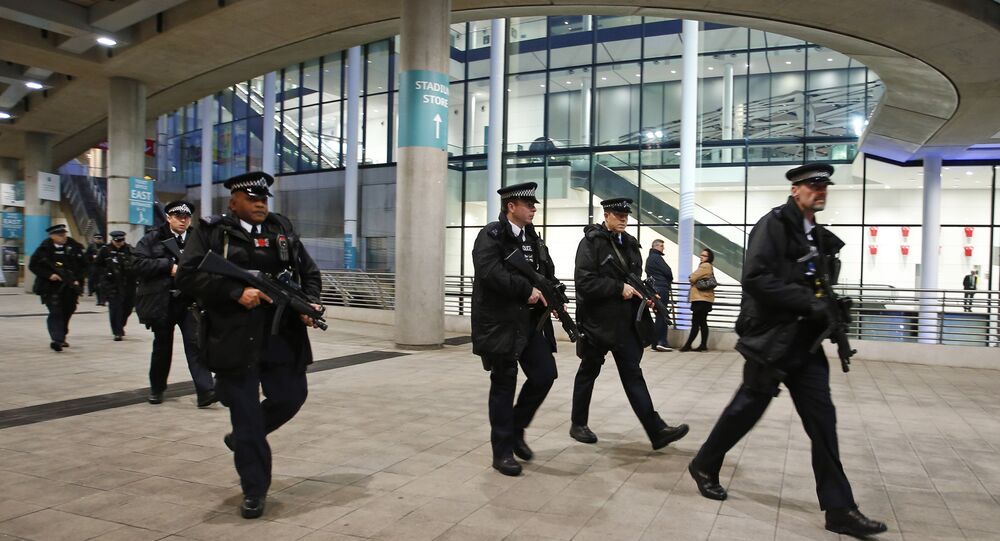 A 22-year-old British woman has been jailed for life after admitting she planned to stab people at random after her sister's boyfriend was killed while fighting for Daesh in Syria. Rizlaine Boular was shot and wounded during a police raid hours before the planned attack.

Boular shouted 'f*** you" at police who shot her three times when they burst into her home in North West London as she prepared to carry out the knife attack near the Houses of Parliament.

A search of her home unearthed a large amount of Daesh propaganda including a copy of the organization's French magazine Dar al Islam which featured an article on the Paris attacks of Nov 2015 and an image of the assassination of the Russian ambassador to Turkey in Dec 2016.

READ MORE: UK Police Shot Woman, Now She is Convicted of Terror Plot Along With Sister

Boular was jailed for life on Friday, June 15, with a minimum tariff of 16 years for preparing acts of terrorism and her Moroccan-born mother Mina Dich, 44, was jailed for six years after pleading guilty to the same offense.

These women have been sentenced to jail today, because they planned to knife innocent people to death in London.
Rizlaine Boular, Safaa Boular and their mother, Mina Dich pic.twitter.com/aq6A2f8LYD

Judge Mark Dennis told Boular it was a "wicked act" which could have caused irreparable damage to people if she had not been stopped by the security services.

He said Dich bore a "heavy responsibility" for leading two of her daughters down the path of terrorism.

Prosecutor Duncan Atkinson QC told the Old Bailey Boular planned to attack people at random near the Palace of Westminster on April 27 2017.

"This would have been an attack that would at the very least have caused widespread panic, but was intended to involve the infliction of serious injury and death," Mr Atkinson told the court.

The attack was planned for a date a month after a van and knife attack at Westminster which led to the deaths of five people including a police officer. That attacker was gunned down by police.

Mr. Atkinson said Rizlaine planned the attack after her younger sister Safaa, 18, was

Safaa's boyfriend Naweed Hussain — who she met online- was killed by a drone strike in Raqqa in early April 2017.

The court heard police and MI5 bugged Safaa's home in Vauxhall, South London, and recorded her reaction when she learned of his death on April 4.

Safaa wept and was comforted by her mother and sister.

"You know this increases your ranks as well as a wife, a widow," Rizlaine told her sister.

"He's waiting for you," said Rizlaine.

Safaa was arrested a few days later but she remained in phone contact with her sister and mother and they began to use a special code to refer to the knife attack that Rizlaine was planning.

The two sisters referred to it as an "English tea party" with an Alice In Wonderland theme and Rizlaine referred to herself as the "Mad Hatter".

He said Rizlaine had also been in an abusive relationship with a man and had two children who were taken into care.

Mr. Khan said she was fired from her job in a sales firm after she started wearing a hijab and it was this incident which caused her to turn to radical Islam.

When her attempts to move to Syria were thwarted she began preparing for the attack, knowing it would lead to her death at the hands of armed police and to "martyrdom".

"There appeared to be no way to leave the country. The only thing she could be sure of was her Muslim faith…she believed she would achieve martyrdom.   Rizlaine Boular embarked on this course of conduct because she wanted to die, she knew that as soon as she used a knife near the Palace of Westminster the police would shoot her," said Mr. Khan.

Boular was born in Britain but her father was Moroccan. Her parents moved to Britain in the 1990s.

The sentencing of a third defendant — Khawla Barghouthi, 21 — was adjourned until next week. She had admitted failing to alert the authorities and may face deportation to her native Tunisia.

Safaa will be sentenced later this year.