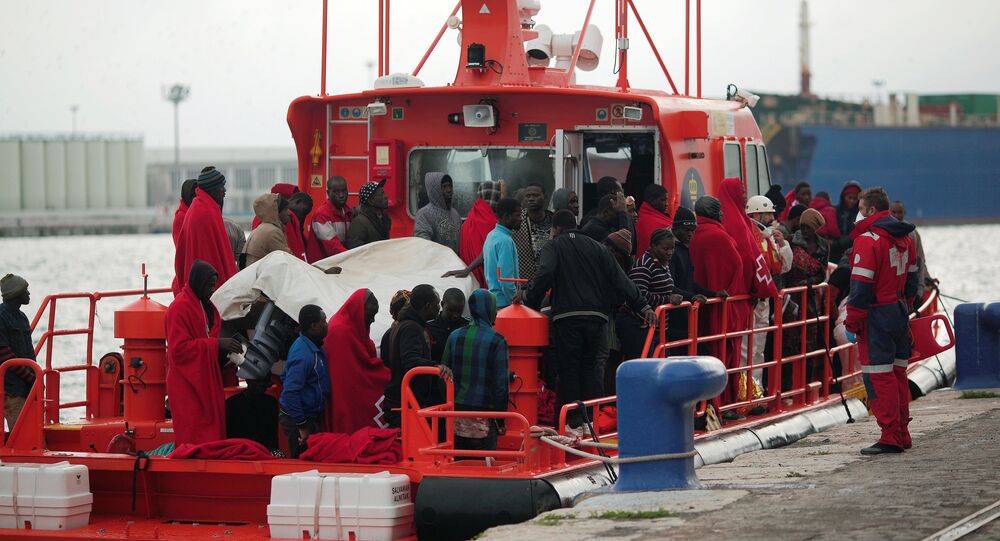 MADRID (Sputnik) - The migrants stranded on the Aquarius vessel will arrive in the Spanish port of Valencia on Sunday morning, as the weather conditions would not allow to dock earlier, the port's authorities told Sputnik on Friday.

Over 600 migrants have been stranded on the rescue vessel in the Mediterranean for almost a week, after Italy and Malta refused to accept them. The Spanish authorities subsequently agreed to accommodate the migrants. It was expected that the ship would arrive to the Port of Valencia on Saturday.

"Bad [weather] conditions at sea during the last several hours led to a shift in original schedule till Sunday morning," the port authorities said.

Madrid could extradite several migrants, who are moving toward Spain aboard the Aquarius rescue ship and two other vessels, Spanish Education Minister Isabel Celaa said Friday.

"As for people aboard Aquarius. Spain cannot deny anything. We work in the same way, as Europe does. We are the border of Europe. The only exemption here is that there has been a single act of solidarity in regards to 629 people in the Mediterranean… We cannot rule out anything," Celaa, who is also the governmental spokesperson, said answering a question about potential extradition of some migrants.

© REUTERS / Jon Nazca
Migrants Held in Prisons With Inadequate Conditions in Spain - Migrants Service
The official stressed that economic migrants are not refugees, adding that the problems surrounding the Aquarius-related crisis are the problems of Europe, but not of Spain, Greece or Italy.

On Sunday, Italy refused to accept Aquarius, carrying migrants rescued in the Mediterranean. The Spanish authorities then said they were ready to let the Aquarius dock in its eastern port. At the moment, Aquarius along with Orione and Dattilo ships are carrying about 630 migrants toward the Spanish coast.

The spokesperson went on saying that the Spanish government was going to remove barbed wire from its enclaves of Ceuta and Melilla, located on the African coast of the Mediterranean Sea bordering Morocco. Ceuta and Melilla are separated from Morocco by barbed wire in order to prevent undocumented migrants from entering the cities.

"The government wants to remove the barbed wire in Ceuta and Melilla … Security on the borders is possible without the need to injure people, with respect for human rights," Celaa said.

The minister called on the European Union to understand that Ceuta and Melilla formed a common border.

"First of all, we must work in the countries of origin and transit of migrants," Celaa stated.

European countries have been experiencing a severe migration crisis since 2015 due to the influx of thousands of migrants and refugees fleeing crises and poverty in the Middle East and North Africa. The majority of migrants have come to Mediterranean countries, such as Spain and Italy, by sea.