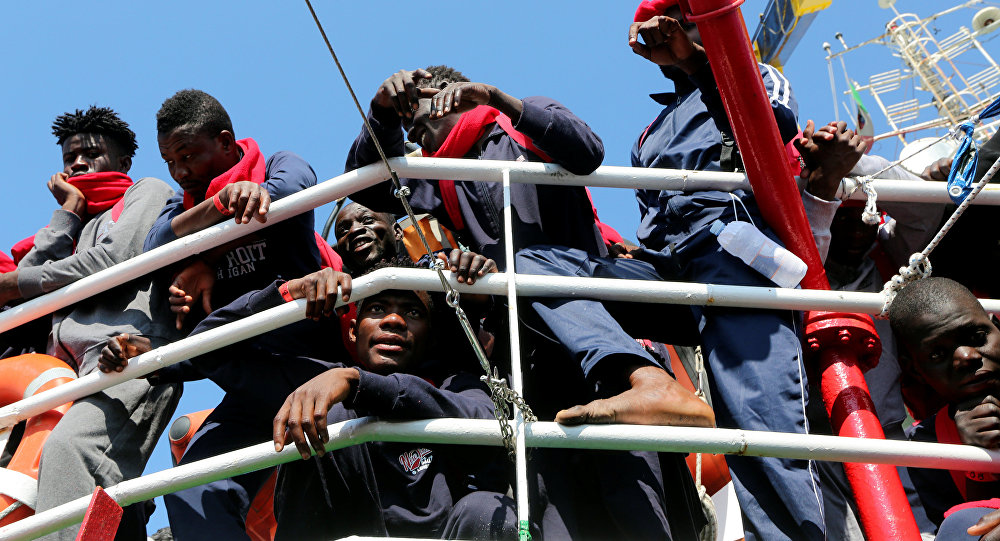 The meeting, scheduled for Friday in Paris, was previously jeopardized on Wednesday after the French president Emmanuel Macron slammed Italian government for a "cynical" response to the migrant ship crisis.

Italian Prime-Minister Giuseppe Conte confirmed that he would meet with the French President.

"President Macron underscored that he did not say anything that was meant to offend Italy or the Italian people," a statement from the Italian prime minister's office said, adding that "Macron and Conte agreed that with the end-June European Union summit looming, it is necessary that new initiatives are discussed together."

Previously French Minister for European Affairs Nathalie Loiseau stated, that despite the conflict, both leaders had held a "sincere talk" on Wednesday and Paris still wanted Conte to visit France.

"Emmanuel Macron and Giuseppe Conte held a telephone conversation yesterday in the evening. This was a sincere talk… We need to talk to Italy, this is a big partner, a big neighbor… [Conte's] visit is currently neither confirmed nor canceled, but we would like him to arrive," Loiseau told Europe 1 radio.

© AFP 2019 / ANDREAS SOLARO
'Under Attack From the South' - Dep. PM Wants NATO to Defend Italy From Migrants
The Italian government considered postponing the talks over unfavorable conditions, expecting to focus on migration and EU's eurozone single currency area. Addressing the issue, Italian Deputy Prime Minister and the leader of the anti-establishment Five Star Movement Luigi Di Maio stressed on Thursday that Rome was still waiting for Macron to apologize for his harsh words about Italian migration policy.

"We're waiting for an apology. If we get one, we can start down a new path," Di Maio said in a radio interview. "There's still time to take a step back, apologize, and then start over."

The row erupted after the Aquarius ship, operated by a non-profit, tried to dock in Italy with hundreds of undocumented immigrants rescued at sea. It was eventually redirected to Spain.

© AP Photo / Emilio Morenatti
Italy to Pursue Hardline Migration Policy Despite Standoff Over Aquarius Ship - Lega Party
The Spanish port of Valencia's spokesperson told Sputnik on Wednesday that the rescue vessel, as well as Italian Coast Guard and naval ships, carrying over 600 migrants, could enter the Spanish port of Valencia late on Saturday.

Italy responded to French criticism by summoning its ambassador. Interior Minister Matteo Salvini then suggested that Conte call off the meeting with Macron and demanded that France apologize.

Meanwhile, French President Emmanuel Macron on Wednesday said that one should not get emotional over the situation with the rescue boat.

"One should never give in to the emotion, which is manipulated by some people," Macron told reporters, according to BFMTV broadcaster. The president also stressed that, over the past year, France and Italy have been working "hand in hand in an exemplary manner."

Italian Prime Minister Giuseppe Conte decided not to cancel his Friday's visit to Paris following his phone conversation with French President Emmanuel Macron which put an end to a standoff over Italy's decision to deny access to Aquarius migrant ship, the Italian government press service said.

"The President of the [French] Republic and Prime Minister Conte will meet on Friday in Paris for a working lunch, followed by a press conference, in order to build on these topics and numerous issues of common interest," the government's statement read.

© REUTERS / Tony Gentile
How Eurosceptics Won the Day in Italy and Outplayed George Soros
On Wednesday night, Conte and Macron held a "sincere talk" and agreed to jointly cooperate on issues related to migrant pressure.

Italy, which is pursuing a hard-line policy on immigration, closed its ports to the refugees of Aquarius, saying that Malta was the closest and safest port to accommodate the vessel.

The Maltese authorities, in turn, said the issue was beyond their jurisdiction, and only decided to send food to the ship, but denied entry to its ports. The Spanish authorities then said they were ready to let the Aquarius dock in its eastern port.