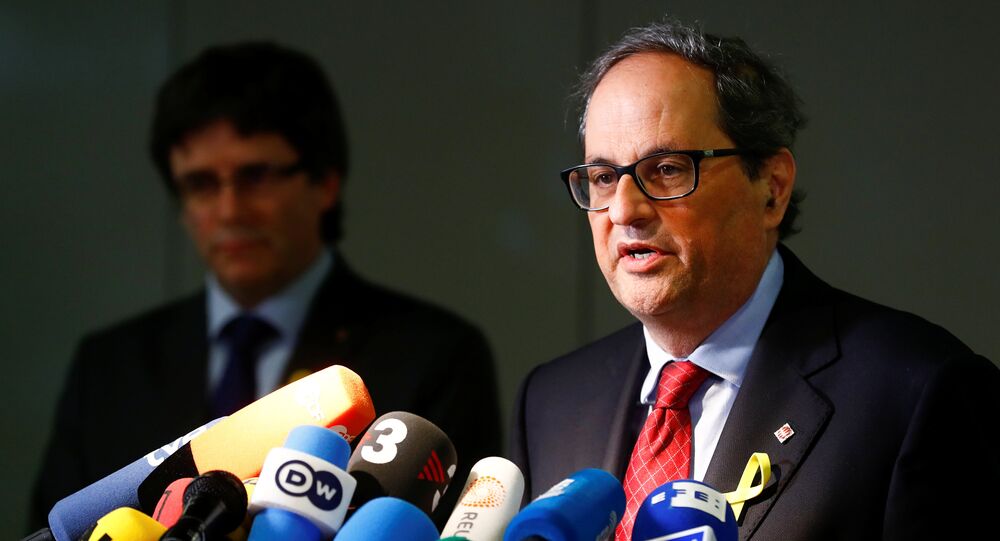 MADRID (Sputnik) - New Catalan leader Quim Torra on Wednesday called on the Spanish cabinet led by newly elected Spanish Prime Minister Pedro Sanchez to urgently address the issues related to Catalonia, such as regional problems and the need to be engaged in a dialogue with Barcelona.

"I hope that Sanchez will agree to get down to the Catalan issue urgently… We need solutions, we need to risk, we should not hide our heads in the sand. We should be engaged in a dialogue… We have traveled a democratic and peaceful way. The Spanish state could not say the same… We have been told to surrender. It means that they do not want a dialogue. There is no place in the world where capitulation is required for a dialogue," Torra said at the regional parliament.

The politician stated that Catalonia would strive for the declaration of independence, adding that a special commission aimed at ensuring self-governance had been established.

© AP Photo / Frank Molter/dpa
Spanish Intelligence Claims Russia Attempted to Meddle in Catalan Crisis
Sanchez assumed the office of the prime minister on Saturday after the parliament voted in favor of the no-confidence motion against former Spanish Prime Minister Mariano Rajoy on Friday, while the new Catalan government led by Torra officially assumed its powers on Saturday, thus ending Madrid's direct rule over the region.

On October 1, Catalonia held an independence referendum, during which the vast majority of voters backed the region's secession from Spain. The plebiscite was not recognized by Madrid, which subsequently imposed direct rule over the autonomous region and dismissed its government. A number of activists and several ministers of the former Catalan government were arrested, while several others managed to leave Spain.