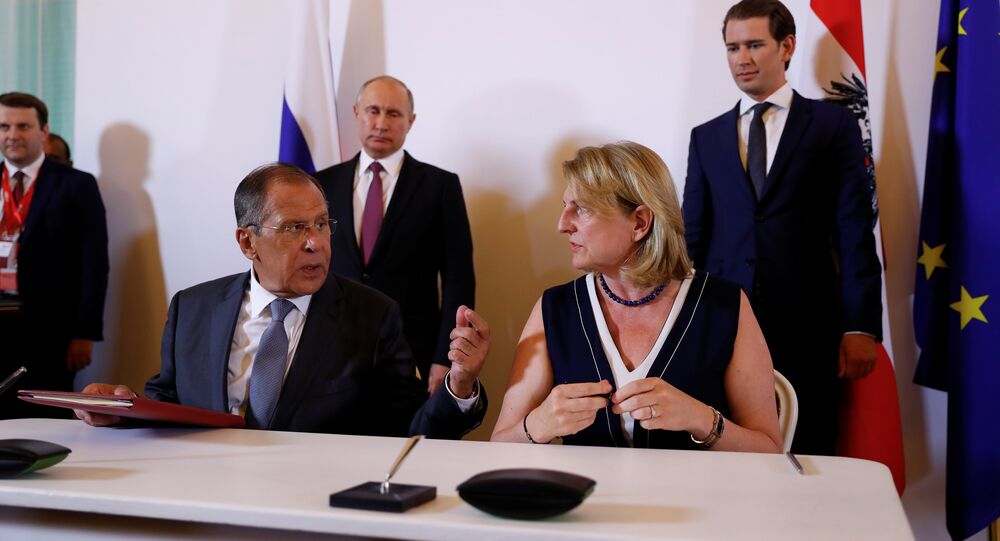 VIENNA (Sputnik) - Austria encourages a dialogue between Russia and the West, and as a host to numerous international organizations offers meeting grounds, including within the framework of the OSCE, Austrian Foreign Minister Karin Kneissl told Sputnik in an interview amid Russian President Vladimir Putin's visit to Vienna.

"The multilateral meeting grounds that we have here, inter alia the OSCE, have always worked well for East-West issues. So the fact that more than 50 representatives meet each other every Thursday morning at the Permanent Council within the OSCE framework — this is something that you will only find in Vienna," Kneissl said.

A number of Austrian officials, including Kurz, have repeatedly called for a reduction of tensions between Moscow and the West, stressing the country's readiness to act as a mediator for the East and West. They have also repeatedly stressed that Austria traditionally enjoyed a good relationship with Russia and called for a dialogue to be resumed.

Cooperation With the Visegrad Group

Austria is interested in cooperation with the Visegrad Group of central European countries as part of its work with various groups of states but has never aspired to join the group, Austrian Foreign Minister Karin Kneissl told Sputnik.

"We agree on some issues and differ on others. This is pretty normal among EU member states… We agree on cooperation modes with different groups among the EU member states where we deem it is useful, but there never was any desire by us to join the Visegrad Group," Kneissl said.

The Austrian foreign minister underlined that even though Austria had a lot in common with the Visegrad Group countries in terms of identity and history, there still were certain differences in their political lines, for example, on NATO membership.

"Yes, these nations are close to us mentally speaking, historically speaking. There are various formats in which each and every one of us is. We also should bear in mind that the Visegrad countries are all NATO members, we are not a NATO member," Kneissl stressed.

The Visegrad Group consists of Poland, the Czech Republic, Slovakia, and Hungary.

In March, Hungarian Foreign Minister Peter Szijjarto said, commenting on the possible enlargement of the Visegrad Group, that the four-nation bloc had important cooperation with Austria, adding that, at the same time, there were no plans to expand the group on the agenda.