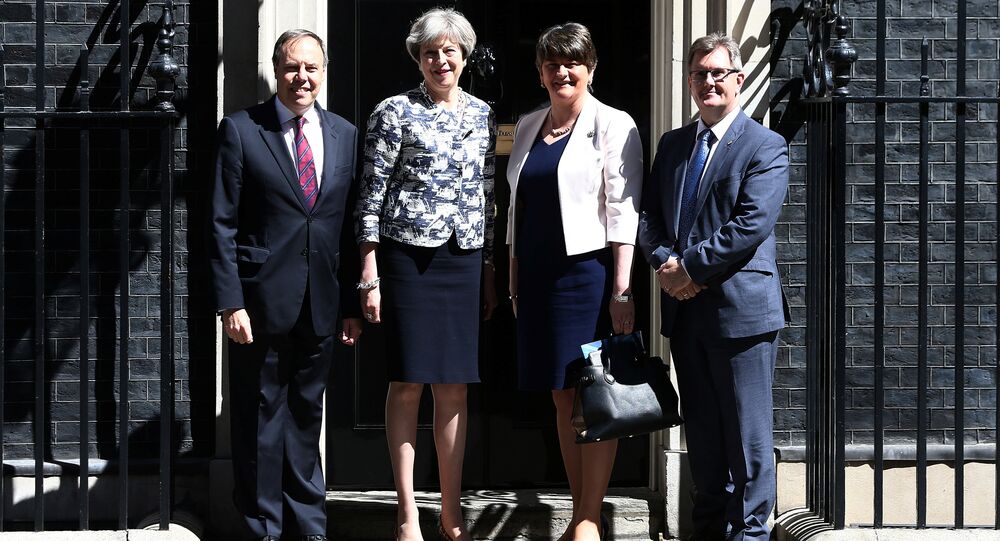 With parliament granted the ability to reject a Brexit deal proposed by the UK government, British Prime Minister Theresa May is looking to rely on support from the Democratic Unionist Party (DUP), which she made a deal with to pass through legislation after the calamitous snap general election in 2017.

DUP leader Arlene Foster said yesterday that her party would end its support for the minority UK government if PM Theresa May pushed forward with a customs union partnership that would result in Northern Ireland being treated differently from the rest of Britain, the Independent newspaper reported.

The top DUP official described this as a “red line” and said the ruling government would lose the support of her party’s ten MPs, which could also hinder the government in passing legislation unrelated to Brexit.

“For us, our only red line is that we are not treated any different from the rest of the United Kingdom, that there are no trade barriers put up between Northern Ireland and our biggest market which, of course, is Great Britain,” Arlene Foster told Sky News on Sunday.

“That’s what we will judge all of the propositions that are brought forward … against that red line and she’s [PM May] very much aware of that. And I have confidence that she knows that she cannot bring forward anything that will breach that red line or we simply will not be able to support them.”

© AP Photo / Frank Augstein
Second Brexit Referendum Would be 'Very Risky Enterprise' – Professor
Ministers and negotiators are still attempting to formulate and agree proposals with their EU counterparts to settle the issue of the Irish border and the UK’s exit from the bloc’s customs union.

Brexiteers, including many from the Conservative Party, have insisted that the PM must meet both of these demands and not achieve one at the expense of the other.

In the aftermath of last year’s snap general election, which saw the Conservatives lose their majority in the House of Commons, the Tories secured a deal with the DUP for support in passing bills and pieces of legislation.

In exchange for the support and cooperation of its MPs, the DUP received £1 billion (around US$1.34 billion at the current GBP/USD exchange rate) of financial aid, which will largely be spent on improving Northern Ireland’s infrastructure.

'No Leadership': Tory Donor Calls to Replace May to Move Ahead With Brexit