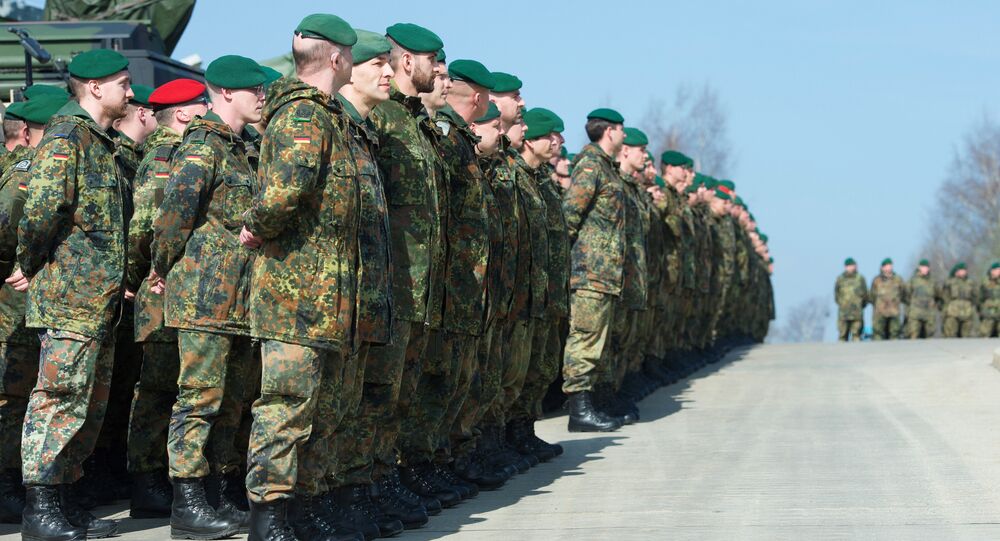 The United States is putting the squeeze on NATO ally Germany in a bid to get Europe's richest country to ramp up its defense outlays and is staking on a conservative “resurgence” in Europe.

In an interview with ultra-conservative US news website Breitbart, Washington’s ambassador to Germany, Richard Grenell, made a swipe at the Bundeswehr for its failure to live up to its commitment to strengthening European security.

Pointing to Berlin’s failure to spend 2 percent of its GDP on defense, Grenell said that Germany was losing credibility.

© AP Photo / Choo Sang-chul/Newsis
Amid NATO-Russian Tensions, US Pushes Germany to Siting Air Defense - Reports
"[German officials] know you must have a credible threat of military action behind you if you're going to be successful in diplomacy," Grenell said. "That's one thing that's missing from the German diplomatic conversation — they right now don't have behind them a credible threat of military action."

He added that inadequate military spending has undermined the German military’s ability to timely respond to perceived threats.

"German military officials know that the readiness issue is a serious problem, there are no working submarines, for example; they don't have a military that is currently ready," the US envoy warned.

In the next four years, Germany is to spend just over one percent of its GDP on defense, which is well shy of the 2 percent target NATO allies agreed on during their 2014 summit in Wales.

Richard Grenell also believes that NATO countries should be pushed to support their allies in a military intervention.

"The US should no longer come to accept any excuses for not taking part in military intervention," he said.

He also said he hopes to “empower” the European right-wing governments and emerging conservative leaders.

"There are a lot of conservatives throughout Europe who have contacted me to say they are feeling there is a resurgence going on," Grenell said, explaining this by conservative politicians’ ability to speak up on sensitive issues like migration, taxes and the need to cut red tape.

He also heaped praise on German intelligence services crackdown on migrants seeking to settle in Germany under false pretenses.

Richard Grenell earlier raised eyebrows in the Bundestag by urging German firms working in Iran to leave the country amid Washington’s plans to withdraw from the 2015 nuclear pact with Tehran.

In addition to the United States, only Poland, Romania, Estonia, Latvia, Lithuania, Greece and the United Kingdom meet the target.

Even though Chancellor Angela Merkel agrees with the need to bring the country’s outlays on defense to the required 2 percent of GDP, her coalition partner, the Social Democrats, come out against any defense spending hikes.

© AP Photo / Arno Burgi
'Longstanding Shortfall': Trump Slams Germany for Being Slow on Defense
Germany has for years struggled to modernize its military as it becomes more involved in NATO operations. Its military faces numerous problems that have raised serious questions about its capabilities and readiness.

Funding issues have been highly embarrassing. In 2014, it was revealed that tank commanders had covered up their lack of machine guns by using broomsticks painted black during a NATO drill.