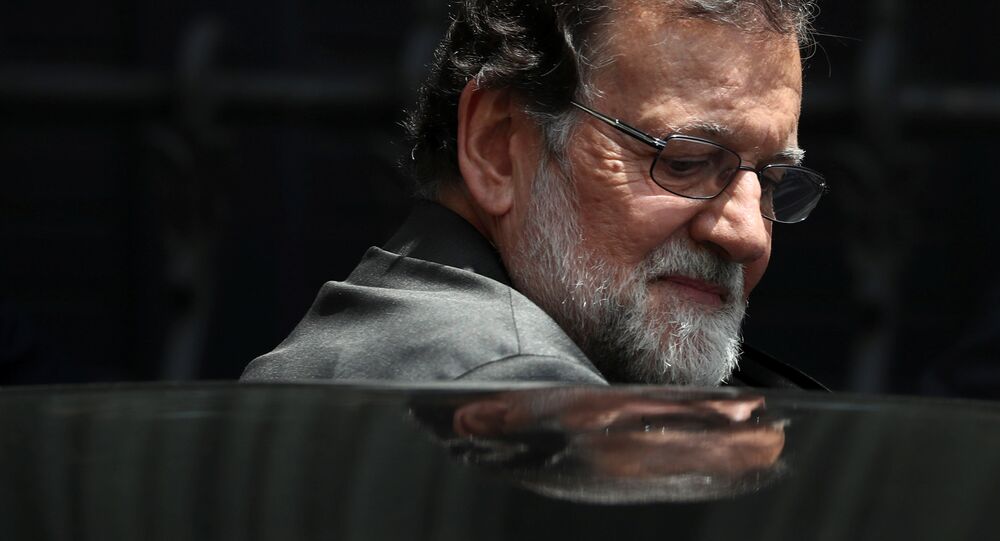 Spain’s conservative Prime Minister Mariano Rajoy is under ever growing scrutiny over allegations of corruption and other forms of misconduct by his party.

PM Rajoy addressed Spain’s lower house of parliament this morning as two-day proceedings, which will conclude with a vote which could see the premier ejected from office, got underway in Madrid, Spanish media reported on Thursday.

READ MORE: Undocumented Migrants Should Be Allowed to Work in Construction – Madrid’s Mayor

Deputies of the Spanish congress will vote later this week on the PM’s future. The motion was filed by the Spanish Socialist Workers’ Party (PSOE), which Pedro Sánchez heads.

A vote of no-confidence would see Mariano Rajoy removed from his post, and opposition leader Sánchez potentially installed in his position, at least for an interim period.

© REUTERS / Albert Gea
Four Puigdemont's Ex-Advisers Join New Catalan Government
Sánchez needs a majority of 176 votes to take over as Spain’s new PM. Preliminary estimates indicate that he currently has 175 votes – just one short of what he needs to have an absolute majority.

The socialists only hold 84 seats, but are rallying support from numerous political alliances – such as pro-independence Catalan parties and Basque nationalists – in the hope of overthrowing Rajoy.

The current PM dismissed the political proceedings as a ploy by Sánchez and the PSOE to undemocratically seize power.

“You have to become the head of government the way the rest of us did, by winning an election. That’s the reasonable thing to do when you’re talking about a democracy. Could we truthfully call this a case of opportunism?” PM Rajoy said on May 31.

“Mr Sánchez is concerned because he is not doing any better in the polls, and he has realized that he will never reach government through elections. That is why he figured that this would resolve all his problems in a single move,” he added.

However, despite the socialists’ alleged opportunism, a recent court ruling, which found several officials of Spain’s People’s Party (PP) guilty of embezzlement, tax evasion and numerous other offenses, also played a role in precipitating the motion.

The PP itself has been fined for its involvement in the “corruption scheme,” Spain’s High Court announced last week.

Sánchez responded to Rajoy’s allegations and insisted that his party are following the constitution, saying “The Socialist Party is being told that it wants to reach government at any price. That’s not true. We want to do it according to the constitution. This is what democracy is all about. Some people have dared to describe our candidate as an enemy of the rule of law, as a traitor.”