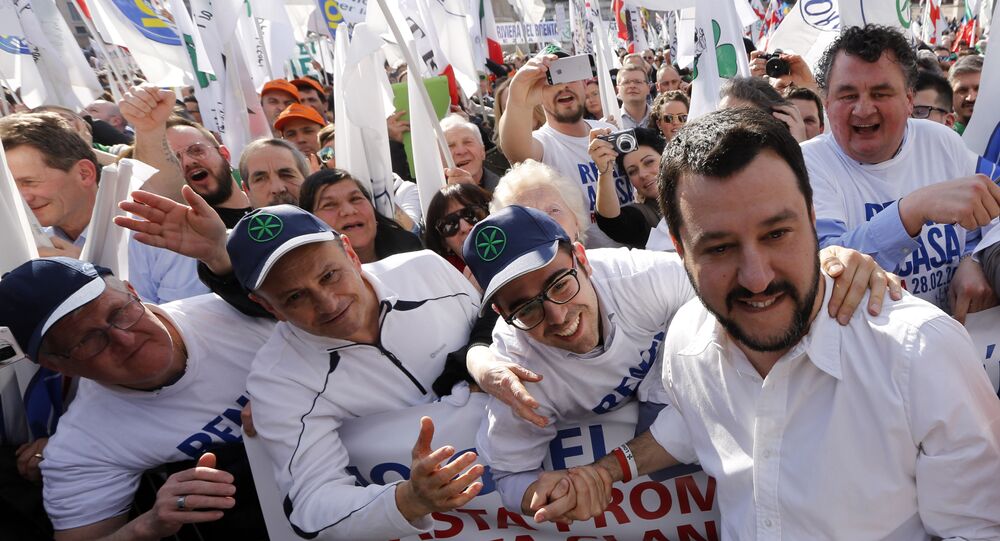 ROME (Sputnik) - The Italian right-wing Lega party is determined to start gathering signatures in support of a submission to the parliament of a draft bill on introducing direct presidential elections in the country, the party's leader Matteo Salvini said.

Under the current system, the president of Italy is elected by the two houses of the country's parliament in a joint session.

"Lega will start collecting signatures in support of a draft law under which the republic's president will be elected directly by the [Italian] citizens so that he could be held accountable for his activities directly to citizens," Salvini said in an address via Facebook.

Salvini's statement comes amid the political crisis in Italy. Italian politicians have expressed their opinions on Cottarelli's assignment.

An Italian caretaker government headed by Carlo Cottarelli, if formed, will be "born dead" and will never be able to get a majority in the parliament, Gianmatteo Ferrari, a member of the Italian Lega party, told Sputnik.

"The Cottarelli government will never have a majority in parliament. It is a government that is born dead. We will go to elections and the Eurosceptic parties will take 70 percent," Ferrari said.

The politician expressed confidence that Cottarelli would not be able to do anything for the Italian people.

© REUTERS / Tony Gentile
New Italian Interim PM Vows Early Elections if Parl't Fails to Form New Gov't
Marco Zanni, a member of the European Parliament from Italy, shared the same point of view on Eurosceptic parties getting the majority of the votes in his comment to Sputnik.

"They [new parliamentary elections] will bring more stability and certainty as the 5stars and the League would do even better than March, defeating the mainstream parties… We do not need another technocratic government," Zanni said.

Following Mattarella's rejection of the cabinet proposed by Conte, the leader of the anti-establishment Five Star Movement (M5S) Luigi Di Maio called on the parliament to discuss possible impeachment of the Italian president. Di Maio also called for holding a new parliamentary election after the impeachment of Mattarella.

In turn, Ferrari urged to be very cautious regarding the request for impeachment. The politician noted that a president's impeachment never happened in Italy before and the procedures were very complicated. The final decision is taken by the Constitutional Court.

"There is a risk of blocking the country and the greatest danger is that if the impeachment procedure is started, the early elections will be blocked," Ferrari added answering a question about the possible consequences of the president's impeachment for the country.

Zanni, commenting on the possible consequences, noted that even if the Constitutional Court rejects the appeal for Mattarella's impeachment that move would have both strong political and symbolic implications.

© AP Photo / Riccardo Antimiani, Ansa
Italian Political Parties Threaten President With Impeachment - Reports
On May 28, Cottarelli said that, in the absence of confidence in his cabinet in the parliament, early elections would be held in the country "after August."

Mattarella did not approve the candidacy of eurosceptic Paolo Savona for the position of economy minister due to fears over Italy's future in the eurozone. Both Lega and M5S criticized the president's rejection of their proposal.

In the March election, M5S came with slightly over 32 percent of the vote. The center-right coalition, including Lega, got 37 percent, while the Democratic Party won about 20 percent of the vote. None of the parties obtained the majority required to form the government.