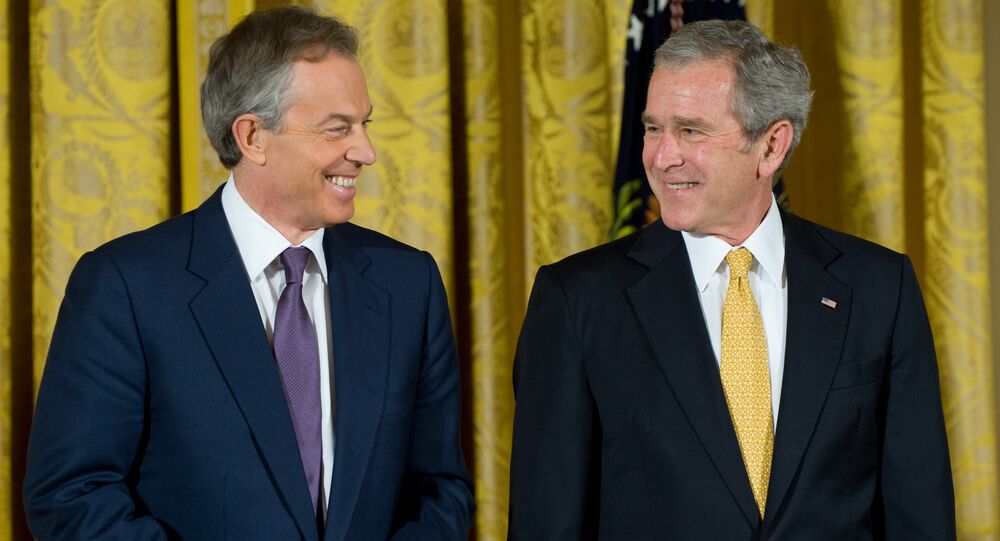 Fifteen years after the UK PM Tony Blair committed Britain to war in Iraq without consulting "Foreign and Defence Secretaries, let alone the rest of the Cabinet," a new report says there are still no safeguards in place to prevent a Prime Minister "acting so recklessly again."

There is a need for new checks which would ensure the government follows a proper and effective decision-making process, should a case similar to the 2003 Iraq invasion arise again, according to the UK Public Administration and Constitutional Affairs Committee (PACAC).

"The present Prime Minister has assiduously used Cabinet and its Committees. PACAC also has great confidence in the current Cabinet Secretary and his commitment to effective decision-making. But this is no guarantee for the future. It's therefore a perfect time to introduce such a safeguard, when the system is working well, not to wait for another catastrophic failure," Chair of PACAC Bernard Jenkin said.

© REUTERS / Jeff J Mitchell
Detail of a declassified handwritten letter sent by the then British PM Tony Blair, to George Bush, is seen as part of the Iraq Inquiry Report, in London.
The Committee argues that the Cabinet Secretary, the senior policy adviser to the PM and the Cabinet, should be able to ask the Prime Minister for a written ministerial direction to ignore the normal decision-making process — "in the same way accounting officers can ask Ministers for a written direction if they want to ignore civil servants' advice on the proper use of public money.

It is then up to the Cabinet Secretary to decide whether the directions should be made known to the Parliament. If the matter concerns national security, the adviser may choose to notify the nominated independent Privy Counsellors and release the information to the MPs later.

"Such a mechanism would dispel any doubt about the Cabinet Secretary's duty to ensure proper decision making. Furthermore, it would make clear to Ministers the importance the Prime Minister and Cabinet place on following proper procedure, and of taking proper advice on matters of procedure," the report says.

Among the committee's recommendations is that the Parliament holds the Cabinet Secretary accountable if they fail to use "this power in the event of a breakdown in Cabinet Government of the sort described by the Chilcot Report."

The Chilcot Inquiry into Britain's role in the 2003 Iraq War revealed in 2016 that eight months before the country was invaded, Tony Blair promised then-US president George W. Bush "I will be with you, whatever."

© Sputnik /
Friend in Need
According to PACAC, the Chilcot report found that poor planning and absence of proper Cabinet discussion led to "many failures of British policy in Iraq and the deaths that resulted."

At present, if the PM ignores the advice of the Cabinet Secretary, the only option for them is to resign.

"No Cabinet Secretary, as the current post holder described it, should be left with the stark choice: either obey or resign," the report says.

The position of the Cabinet Secretary is currently held by Sir Jeremy Heywood. His predecessor in 2003, Andrew Turnbull, was criticized by an ex-minister Clare Short for allegedly providing inadequate scrutiny of the government's decision making in the run-up to the 2003 Iraq war.

"He allowed us to rush to war in Iraq without defence and overseas policy meeting, looking at all the military options and the diplomatic options and political options. (He) allowed the Joint Intelligence Committee to meet with Alastair Campbell chairing it. He has allowed our decision making system to crumble," she said during a televised program.

PACAC's 'Ensuring Proper Process for Key Government Decisions: Lessons Still to be Learned from the Chilcot Report' paper has been made available on May 29.