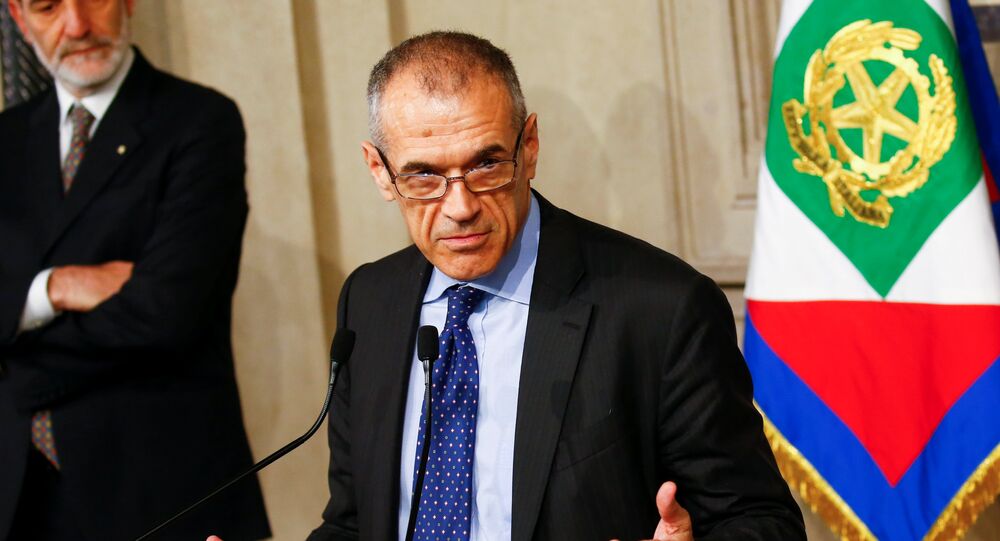 Italian President Sergio Mattarella has given the mandate to form the country’s national government to economist Carlo Cottarelli, Ugo Zampetti, an official in the president's office said.

As Italy's new premier-designate Carlo Cottarelli stated, he would bring about a new election in Italy as early as this fall if he doesn't win a confidence vote in parliament.

"I'll present myself to parliament with a program which — if it wins the backing of parliament — would include the approval of the 2019 budget. Then parliament would be dissolved with elections at the beginning of 2019. In the absence of (parliament's) confidence, the government would resign immediately and its main function would be the management of ordinary affairs until elections are held after the month of August," Cottarelli said shortly after being named interim prime minister by Italy's president.

Italian parliamentary elections were held on March 4. The election resulted in the M5S securing more than 32 percent of the vote.

"In the absence of confidence, the government will resign immediately. Its main task will be to prepare the country for elections after August. In this case, the government will remain completely neutral with respect to the election campaign. On my part, I promise not to nominate myself and ask the same commitment from other members of the government," Cottarelli noted in a statement as broadcast by the Rainews24 channel.

Italy's center-right Forza Italia political party will not support the possible government led by economist Carlo Cottarelli in parliament, the party's spokesman in both chambers of the Italian parliament Giorgio Mule said.

"The current parliament clearly states that Cottarelli's government will not receive votes to form the majority. Forza Italia and the entire center-right coalition, as well as [populist] Five Star Movement [M5S] will not give their votes to the technical government. So the nascent government is already a minority," Mule said in a statement.

© AP Photo / Alessandra Tarantino
Italy's Lega Hopes to Get Enough Gov’t Posts to Pursue Economic, Migration Agenda - Member
Italy's eurosceptic Lega party speaks in favor of a new parliamentary election amid President Sergio Mattarella's refusal to support the list of potential members of the Lega-M5S coalition in hope of considerably improving its performance compared to the last inconclusive vote, Paolo Grimoldi, a secretary for the party in the northern Italian region of Lombardy, told Sputnik.

On May 27, Mattarella rejected the list of potential members of the government proposed by prime minister candidate Giuseppe Conte, nominated by Lega and the Five Star Movement (M5S), due to the candidacy of Paolo Savona for the post of economy minister. According to the president, Savona's views on the EU monetary policy could "threaten Italy's membership of the Eurozone." Following the move, M5S leader Luigi Di Maio proposed discussing Mattarella's impeachment, while Lega leader Matteo Salvini called for a new parliamentary election.

"As Lega, we didn't ask for the [president's] impeachment but we asked for elections because in this situation we want to ask people what they think about the president's behavior. We think we can improve a lot our votes," Grimoldi said.

Grimodli clarified that impeachment was a rather lengthy process, so a snap election could be held sooner than a possible impeachment vote.

"The impeachment is requested by Five Star Movement and Brothers of Italy. It is a lengthy process. Therefore, there is a possibility that we may hold elections sooner than voting for the impeachment," he noted.

The politician, however, reiterated the party's opposition to Mattarella's decision, accusing the president of bias and lobbying.

© AFP 2020 / TIZIANA FABI
Italy's Lega Party Slams EU Official's 'Interference' on Migration, Economic Policy
Berlusconi says his party Forza Italia will not vote in support of the government with Cottarelli as prime minister. He also noted that he's open to running for office in Italy's next election.

"As the political leader of the movement, I call on all our supporters, the electorate, and activists to… take part in a number of initiatives, starting from tomorrow. I know you are angered. We cannot stand by and watch, we must swiftly react. We need symbols to be seen. Today, I will hang the Italian flag out of my window, and I urge you to follow suit. Along with it, I call on you to be active on social media, using the hashtag ‘My voice matters'… We will also organize manifestations and marches across the main Italian cities… On June 2, Republic Day, I invite you all to Rome, where we will organize a big event. We will enter into a [new] government — I promise!" Di Maio said in a speech, aired on his Facebook page.