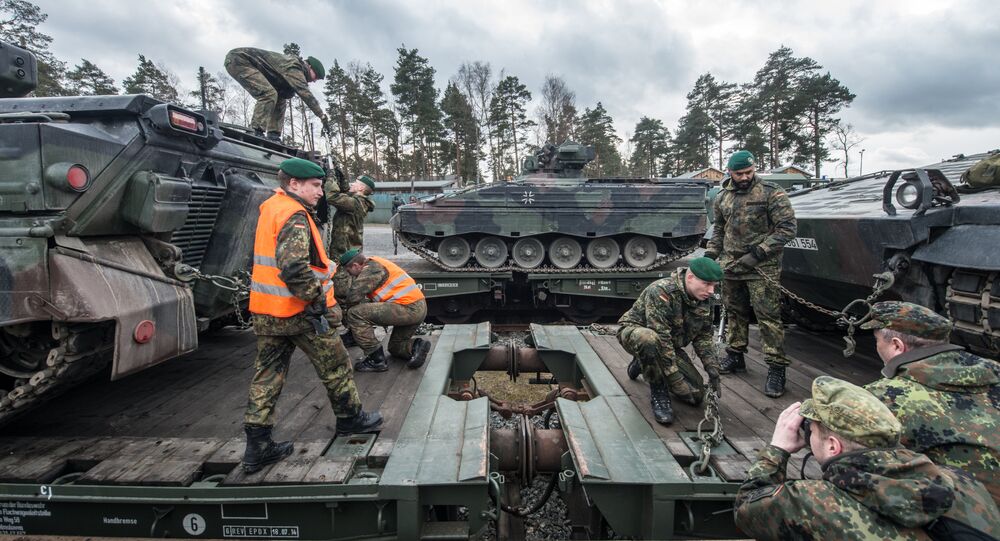 MOSCOW (Sputnik) - Germany needs to step up efforts to increase its defense budget to come closer to the spending target stipulated by NATO, EU budget commissioner Guenther Oettinger said in an interview with the Funke media group.

"If Germany wants to be credible in NATO its government must get much closer to the 2-percent target by the end of the electoral period," he said in an interview with the Funke on Saturday.

The EU budget chief said a commitment from Berlin to spend an annual 1.5 percent of its gross domestic product on defense would be appropriate.

© AFP 2021 / Odd ANDERSEN
Merkel: Europe Can No Longer Rely on US 'to Protect It'
Oettinger said US President Donald Trump was wrong in his criticism of EU partners when it came to trade but not in his demands that the allies raise defense expenditure, he argued.

Earlier this month German Chancellor Angela Merkel suggested, that spending 2 percent on defense wasn't "completely beyond the imagination," despite the fact, that her coalition partners from the Social Democratic Party blocked the budget raise, leaving only 1.3% of GDP for defense.

Previously the small defense spendings were criticized among Germany's NATO allies, first of all, the US. Washington, which according to NATO's stats, spends 3.6 percent of its GDP, insists that its partners should reach the agreed guidelines by 2024 at the latest. The US President Donald Trump has long bemoaned the situation within the alliance when only 5 of 28 members follow the 2 percent guideline and repeated his criticism following talks with Merkel this April.