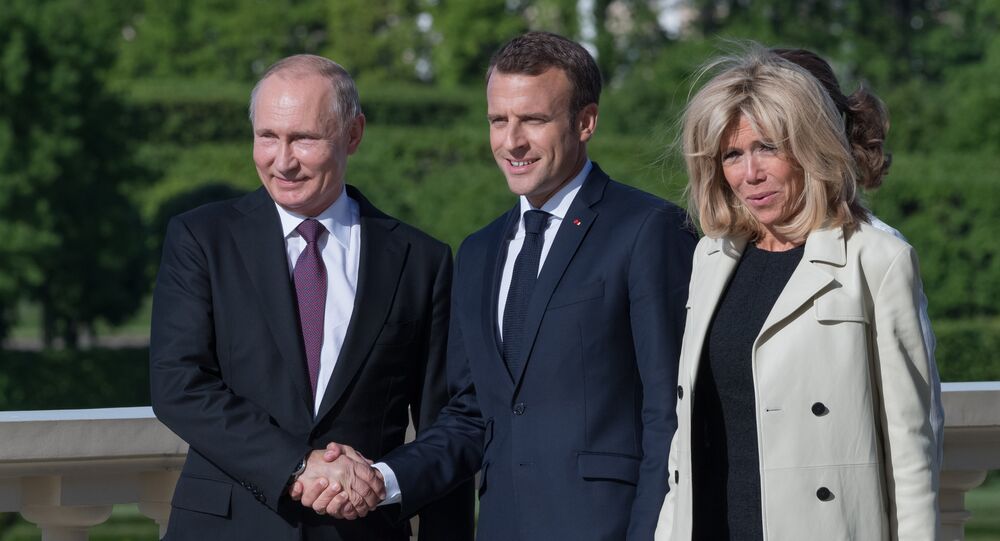 Emmanuel Macron has come to Russia for the first time since being elected president in 2017, bringing a squad of French top officials and entrepreneurs, to attend the Saint Petersburg International Economic Forum (SPIEF) and meet Vladimir Putin. The conflicts in Syria and Ukraine, the Iran deal and Paris-Moscow relations are on the agenda.

French President Emmanuel Macron has arrived in Russia on May 24 for a two-day visit, which is his first one since the 2017 French presidential elections. Macron, accompanied by his wife Brigitte, has taken his Culture Minister Francoise Nyssen, Foreign Minister Jean-Yves Le Drian and other top officials from the Russian-French Trianon Dialogue organization and friendship parliamentary groups, as well as French businesspeople.

The French president has been welcomed in the Konstantin Palace, a former residence of Peter the Great set some 20 kilometers (12 miles) outside Saint Petersburg.

Putin showing #Macron and his wife Brigitte the French-style gardens of the Konstantin palace outside St Petersburg pic.twitter.com/FzprMXhIqJ

​During his stay in Russia, he is to attend a number of events within the framework of the SPIEF and hold talks with Russian President Vladimir Putin. After a tête-à-tête meeting they will have broader negotiations. According to the Kremlin, the two presidents plan to discuss developing bilateral cooperation as well as international and regional topics, including possible ways to settle the crises in Syria and Ukraine and the situation around the 2015 JCPOA, known as the Iran deal, from which the US recently pulled out of.

Besides, around 20 treaties, contracts and memorandums have been prepared for the visit, which are to be signed by Putin and Macron during the SPIEF.

Macron is leading the French delegation during the SPIEF, which will include the heads of about 40 French enterprises and start-ups. Macron will take part in a main session along with Putin, Japanese Prime Minister Shinzo Abe and the chief of the International Monetary Fund, Christine Lagarde.
The chief executive of Schneider Electric, Jean-Pascal Tricoire, told CNBC that Macron wanted to maintain communication with Russia.

"President Macron has been very clear that he wants to keep an open dialogue with all heads of state. When you look at Europe we share a large border with Russia. There are plenty of things that need to be discussed," he said in an interview at the SPIEF.

Although Emmanuel Macron has already held talks with Vladimir Putin a year ago in Versailles, France, where they discussed bilateral relations, the situation in Syria and Ukraine and agreed on creating a diplomatic platform, namely the Trianon Dialogue, for closer cooperation, this visit has triggered controversial headlines in the media across Europe and the US.

CNBC therefore linked the visit with decreasing support for anti-Russian sanctions across Europe. This has been echoed by The Washington Post, which has titled an article regarding the visit “France and Macron have buried allegations of Russian meddling.” Pointing at the high-ranking lineup at the SPIEF, CNN has stated, “Despite sanctions, Putin is pulling the world back to Russia.” The British Telegraph has also hinted at the sanctions cloud hanging over the visit, underscoring that “sanctioned oligarchs [will get] to 'party like Russians' at the forum with Vladimir Putin, Emmanuel Macron and Robbie Williams.”

The British Financial Times has claimed that Macron will press Vladimir Putin to help de-escalate tensions in the Middle East, support his plan for a more comprehensive agreement with Iran than the 2015 accord, recently disrupted by Washington, and try to urge Russian to back further curbs on Tehran’s missiles program and interference in the region.

Oh so now France is colluding with Russia??? This just gets better and better.

Hey Europe, getting in bed with Russia is like playing with fire.

Russia is winning. “Trump’s withdrawal from the nuclear deal with Iran has added fresh impetus to European outreach to Russia… Macron heads to St. Petersburg to leverage his candid relationship with Putin… and to preserve the deal" https://t.co/DVjBs80nhr

​​Some liked the move.

The only wise thing to do! USA cannot be trusted. Europe must liberate itself and form its own alliances. We don't have the same core need for enemies as the USA does. Our culture is more mature

​​After the talks with Putin in May 2017, the French president had stressed that a dialogue would be essential for progress on the issue of Syria and Ukraine, despite differences between France and Russia.

"There are things on which we disagree, but we expressed them. And above all, we discussed ways to conduct our joint actions. We want to act together, because if we don't create the conditions for that, if we have no open dialogue we will not be able to advance on the issues I mentioned. Sometimes disputes may arise in such a dialogue … but if we don't reach it, we will not be able to move forward either on the issue of Syria nor of Ukraine," he said.