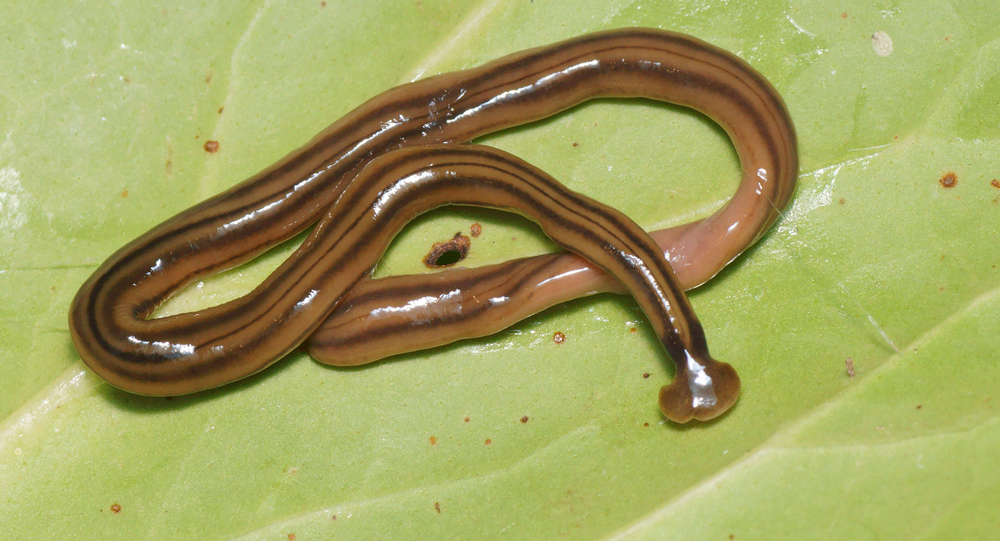 Five invasive species of hammer-headed worms, some of them reaching 40 centimeters in length, have been discovered in France and overseas; remarkably enough, two of them were previously not known. Researcher Jean-Lou Justine says that his team was shocked to find that these bright-colored worms hadn’t come into the spotlight for such a long while.

France has seen a new species of flat worms emerge; and its length may equal that of an arm, French scientists have remarked in dismay.

In an article titled "Giant Worm at My Place" (from French "Giant worms chez moi!") professor of parasitology Jean-Lou Justine from the National Museum of Natural Science and his colleagues wrote:

"We, the scientists, were shocked to learn that such bright worms escaped for so long the attention of the authorities and scientists in such a well-developed European country."

Flat earthworms (Plathelminthes), which travel from continent to continent with the help of plants are normally no more than 5 centimeters long; there exist, however, gigantic T-headed worms, so-called Bipalium worms (Bipalium et Diversibipalium), frequently referred to as horror movie creatures.

Citizen science reveals the presence of five species of hammerhead flatworms, two of which are 40 cm long and two are possible new species

The largest representatives of this sub-species may reach roughly 40 centimeter in length.

© CC0
Can of Worms: CIA Malware for Hacking Phones and TV's 'Will Be Used by Hackers'

The research published on the PeerJ website involved an array of volunteers and parasitology amateurs, who shared over 100 pictures taken since 1999.They appeared to have spotted the frightening species in France, and shorter ones in the Caribbean countries, South America, Africa and in the Pacific.

"Witnesses recollect taking the newly found worms to research centers and universities, but being most politely shown the door on various excuses," French l’Obs cited the scientists as saying.

The aforementioned parasites reportedly eat other earthworms. Their impact on soil ecology hasn’t yet been studied, although France’s southwest region seems to be an appropriate place for conducting research. Scientists assume that the flat worms outbreak might have been due to the region’s mild climate.

This Creature Can Survive Apocalypse