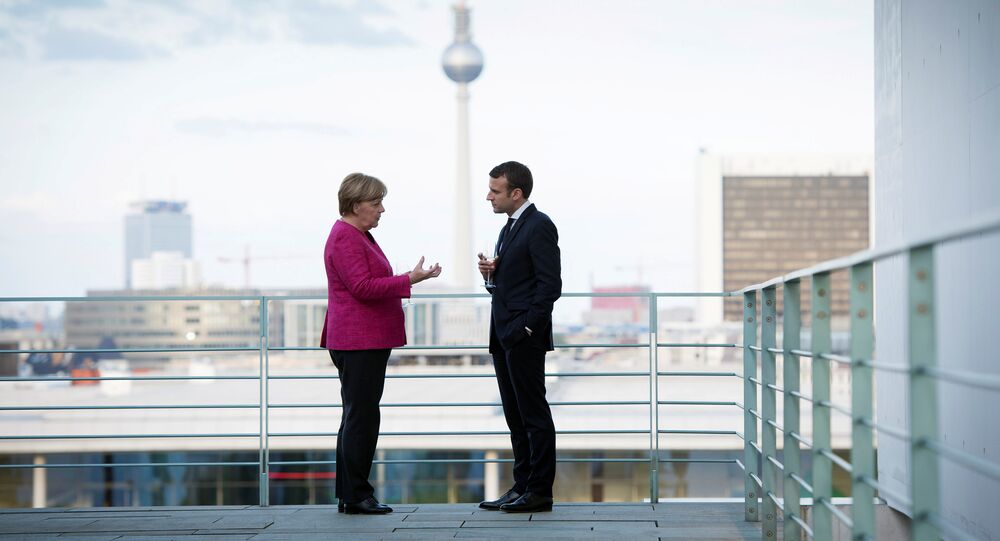 154 economics professors have warned that creating a eurozone budget and a post of the union finance minister, the French president has pushed, will damage prosperity throughout Europe.

A collective plea against French President Emmanuel Macron’s reform of the European financial system, signed by more 150 prominent German economists, has been published by the Frankfurter Allgemeine Zeitung (FAZ). They state that the French leader’s proposals “pose great risks for European citizens,” denouncing the fundamental measures planned to help the EU adapt to the new economic landscape, including the consequences of the Brexit.

According to the scholars, the proposed model of the union “undermines growth and threatens prosperity throughout Europe.”
The planned changes, pushed by Macron and supported by EU Commission President Jean-Claude Juncker will affect several institutions and mechanisms, including setting up the joint budget.

Flawed in Every Measure

One of the major flaws of the new system within the 19-nation euro union, according to scholars, is creating the European Stability Mechanism (ESM), which is supposed to be a reinsurance instrument for bank recovery (backstop). They denounce the idea, as it will function at the expense of growth and financial stability in Europe as banks and regulators will lack incentives to clear bad loans.

Besides, when the ESM, planned as a European Monetary Fund (EMF), is subjected to EU law, non-members of the eurozone will be able to influence it. At the same time, creditor countries, among others Germany, would lose an ability to control the situation and could be easily overruled, as individual countries would be deprived of a right to veto, concerning urgent decisions by the EWF.

The planned shared system of deposit insurance is also viewed by the German scientists as a threat, which would also socialize the cost of past mistakes of banks and governments.

READ MORE: Eurozone Must Not Ignore Need for Reform

Another idea the economists have slammed is the creation of the European Investment Fund for macroeconomic stabilization and one more fund supporting structural reforms. According to them it would indulge further transfers and loans to eurozone states that have already failed to reform their finance systems, and reward financial misconduct.

The idea of a European minister of finance, able to negotiate with the European Central Bank (ECB) has also become a red flag for the German economists. According to them, an office with such capabilities would make monetary policy more politicized.

They have called for structural reforms instead of creating the mechanisms, which they believe will indulge economic misconduct. According to the economists, the currency union needs an orderly insolvency procedure for states and an orderly withdrawal procedure. They have called for the completion of the Capital Market Union, as well as linking voting rights within the ECB with each state’s liabilities.

Since taking the presidential office in 2017, Emmanuel Macron has advocated for reforming the EU to enable it to compete with big powers like China and the United States. As he put it during the 2018 World Economic Forum in Davos, the countries that share the euro currency should agree on a "much stronger" and "much fairer" system.

Despite unanimity regarding recent international tensions with the US on the Iran deal and tariff exemptions, France and Germany have struggled to sort out their differences over their outlooks regarding the future of the European Union. Despite Germany’s backing of the reform, mentioned in a recent coalition treaty of the new German government, Macron's proposal of creating a fund for the currency union hasn’t found support. According to German lawmakers, it would create a "transfer union" in which Berlin is likely to foot the bill of collective fund, paying more than other members. Germany, which is the largest net contributor to the union’s budget, insists that each country’s role in this fund should be connected with economic reforms.

However, other member states who are set to contribute more to the bloc after the UK’s exit also voiced their discontent, with Denmark, Sweden and the Netherlands describing the proposals as “wrong” and “unacceptable.”

According to last year’s agreement between Merkel and Macron, June 2018 is set to be the deadline for all 19 eurozone states to agree on a reform roadmap.

Eurozone Must Not Ignore Need for Reform

EU 'Catches Up to US Financial Market' With New Trading Reforms